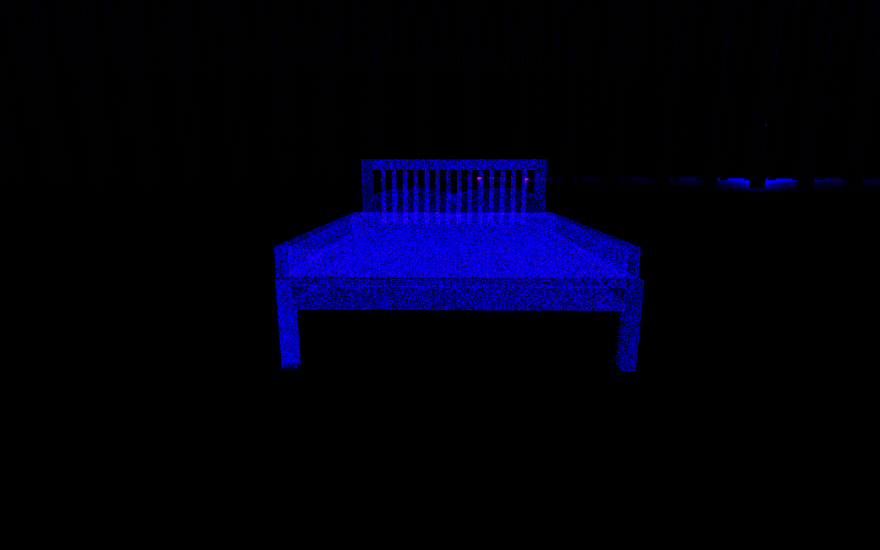 Popularized by the 122 tape-recorders scattered across BioShock’s (2007) sunken city, the audio-log is a device for dispensing story details in voiceover to a player who might be more absorbed by shooting baddies. Audio-logs allow for writing to be integrated into a game which otherwise would not support the story formats we’re already familiar with through text or radio or film: usually they are unobtrusive and not integral to the experience. This is not always true: in Gone Home (2013), the audio-logs represent pages of a diary, and are not just the central way in which the story is told, but the most prominently emphasized feature of the game. In either case, players are able to explore writing at their own pace and in their own progression.

Diana Hamilton’s Dreams is a project that integrates poetry into a game space by reimagining the audio-log. Coded and created by Alejandro Miguel Justino Crawford, the game lets the player navigate a large black expanse to track down bouncing brightly-lit canisters that broadcast the voice of poet Diana Hamilton as she relates her dreams, full of strong imagery and complicated social dynamics. The dreams sound like they’re being relayed from bed—there’s a quietness to the voice, and the presentation feels unprocessed and unpolished: she coughs, she restates, reconsiders.

The canisters bounce away from a player who gets too close, but can be heard at a distance, which, at times, creates a chorus of dreams. Words and mental images are overlaid on one another and nothing can be totally discerned or pulled out of anything else. It is a work firmly grounded in poetry, and one that demonstrates the difficulty of remembering or relating a dream you can’t quite pull from your subconscious.

When asked to nail down a definition for poetry, Hamilton suggested that “The easiest way to know if something is a poem is to find out if anyone has called it one. This is not sufficient, but it helps,” and in that sense, Diana Hamilton’s Dreams is not just a collection of poems in the form of a game, but is itself a poem: it’s a collection of stanzas, beginning at the bed, and linked by the neon lines the player draws by moving from audio-log to audio-log. Hamilton’s definition of poetry also says that maybe “poetry involves a greater degree of connotation over denotation, or some less specific lack of utility, enabling us to recognize poetry in prose; poetry is a naming function; it’s a truth process; it’s one output of the movement of Spirit.” Crawford’s game approaches the truth of dreams not necessarily through the neon visuals, but through the navigation and connection and layering of sounds and stories that, half-recognized, slip away when we try to tie them down.

Diana Hamilton’s Dreams is the 200th release from Gauss PDF, an online publication started and maintained by J. Gordon Faylor, who saw a need for it in the experimental poetry scenes in New York and Philadelphia. In the changing landscape of the digital humanities, Faylor’s Gauss PDF imagines file types as genres.

Alejandro Miguel Justino Crawford is a poet and video artist. He has directed music videos and live visuals for several bands, including MGMT and Tame Impala, and he’s made a couple games, too. More of his work can be found here. Diana Hamilton’s website is here, and the Gauss PDF collection is here.