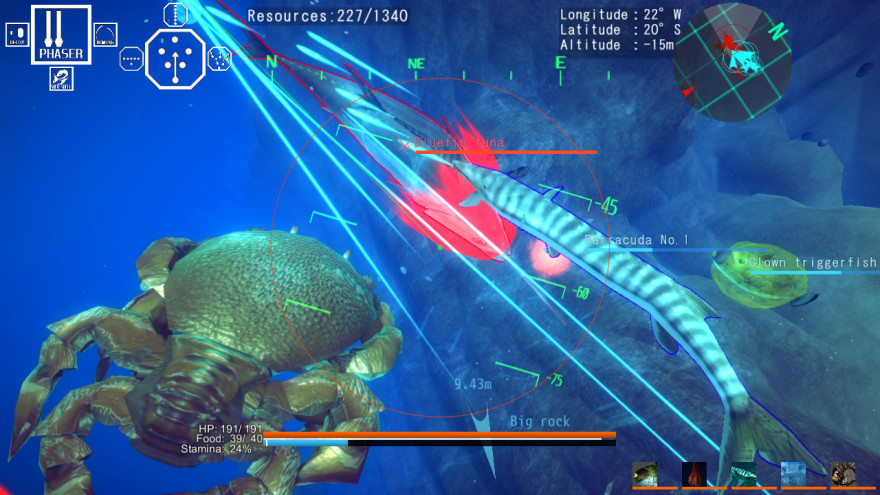 Borne onto Steam by a zephyr of Nipponese weirdness, Ace of Seafood is the fish-‘em-up I never knew I was missing. An unsolicited sequel to Neo-Aquarium: The King of Crustaceans (2012), the progenitor and sole occupant of the “armed-lobster-conflict-simulator” genre, Ace of Seafood takes the frenetic pace and visual spectacle of aerial combat and submerges it in the spumy waters of the South Pacific. The results, at least in terms of delirious, absurdist enjoyment, are never less than spectacular. Where else can you watch a school of laser-mouthed chinook salmon issue a salvo against an inexplicably resurrected Bismarck-class battleship? Ace of Seafood, in short, is glorious and utterly incomprehensible.

Novelty aside, Ace of Seafood joins a growing tradition of Japanese-to-English ports that take the end of the Anthropocene and subsequent rise of kingdom animalia as their setting. Hatoful Boyfriend (2014) imagined a future in which superintelligent but emotionally stunted avifauna rule our earthly roost, while Tokyo Jungle (2012) left a crumbing impression of its titular city to a menagerie of increasingly feral species. We’re told the mackerel-crowded seas of Ace of Seafood belong to a future in which “humans have all but disappeared.” The reasons for our disapparation are left unanswered, as is the manner by which fish and crustaceans alike evolved oral lasers. Some questions are probably best left open; any cogent answer would be a disappointment anyway.

Like its posthuman antecedents, Ace of Seafood is meant to be funny. And it is. But lurking below the humorous sheen of Tokyo Jungle and Hatoful Boyfriend were surprisingly thoughtful takes on what really separates humans from the ‘lesser’ beings with which we share this rocky sphere. At heart, both Tokyo Jungle and Hatoful Boyfriend were motivated by one of the thornier questions proposed by the philosophy of mind: what is it like to be anything other than yourself? Not ‘like’ as in ‘resemble,’ but ‘like’ as in what it’s ‘like’ for an other being to experience itself. It’s hard enough to ask what it would be like to be a fellow human, but with animals, we sink into a speculative abyss where language largely fails us. How could we describe the experience of a non-human entity using one of humanity’s defining tools?

Simulation, though, can do something words can’t. More than describing the experience of some ‘other,’ simulation enables us to embody an interpretation of the experience of an ‘other,’ however incomplete and imperfect that interpretation may be. Tokyo Jungle excels at exactly this, dredging up a kind of Heideggerian drama in which ‘play’ is inseparable from coming to terms with the relative strengths and weaknesses of a species unlike your own. The game requires you (animal-you, that is) to situate yourself in the world vis-à-vis things’ “tool-being,” the quality by which objects are understood only in relation to their potential uses. Everything—environments, other animals, etc.—in the game is instrumental in one way or another, organized and defined by the facts of your species. For Tokyo Jungle, what it’s “like” to be a pomeranian, hyena, or sika deer, is to suffer the burden (or is this a liberation?) of being unable to think beyond utility.

Yet Ace of Seafood deviates from this conclusion in that the game shows exactly zero interest in a fish’s distinctive qualia, of which the ability to shoot lasers of uncertain origin is only the most obvious sign. Ace of Seafood’s English translations are imaginative at best and incoherent at worst, so what little exposition the game provides should be taken with a hearty grain of sea salt. We’re told, though, that the player, in their “currently [sic], newly awakened state . . . [is] no more than a piece of seafood, but also blessed with talent in leading allies in battle,” and that “it is the future. The human mind is separate from the body, but has not yet forgotten all forms of life.” How, uh, enigmatic! But I choose to interpret these missives as evidence that the “consciousness” that animates the protagonist of Ace of Seafood is, in fact, a human “consciousness,” transmogrified, somehow, into the body of a chinook salmon (or sardine, or sharpfin barracuda, or…). The titular “ace of seafood” is, after all, seemingly the only fish in this particular sea with the capacity for leadership, tactics, and long-term planning.

In practice, the experiences this higher-order thinking enables are the only things that justify the handful of hours it’s possible to sink into Ace of Seafood. There is no meaningful narrative, only the slow acquisition of more “reefs” (read: bases) and “genetic material” (experience points). Weirdness be damned, Ace of Seafood quickly settles into the habitual rhythm of a conventional role playing game: explore, fight, upgrade, repeat. As more and bigger fish are rallied to the ace of seafood’s cause, increasingly fearsome foes—from hermit crabs, to tiger sharks, to (presumably automated?) submarines—are made vulnerable. As ace among seafood, you quickly come to think of your scaly allies in familiar tactical roles: sardines are ranged DPS, spiny lobsters are frontline tanks, et cetera. So there is, in a sense, an instrumentality to Ace of Seafood reminiscent of Tokyo Jungle. The difference, though, is that the ace of seafood is not motivated by the will to survive, but the will to power and conquest, those peculiar qualities of the human animal, the only creature known to wage war when extinction is not at stake.

If Ace of Seafood’s preordained objectives are distinctly human, so too is the interface through which you pursue them. True to its name, Ace of Seafood sports a HUD that has more in common with the interior of a fighter jet than a fish’s experience of vision (whatever that may be). The assemblage of sensors that populate this interface—navigation points, indicators for roll, pitch, and yaw, a depth gauge, etc.—are modeled on the prosthetic extensions we humans have developed to enable us to act in environments that evolution did not deem necessary for our survival. Such inventions were designed to grant us ‘senses,’ or something like them, that we would not otherwise have. But what are these tools doing here behind and on the glassy eyes of a pacific chinook, which does by nature and instinct what we can only do through technology?

Ace of Seafood is not a game about what it’s like to be a fish. But it does, in oddly literal ways, imagine what it would be like for a human to be a fish, albeit a marauding and cybernetic one. But perhaps that’s exactly the point. As strange as it sounds, Ace of Seafood, down in its depths, is really about how we see ourselves—as human after all.