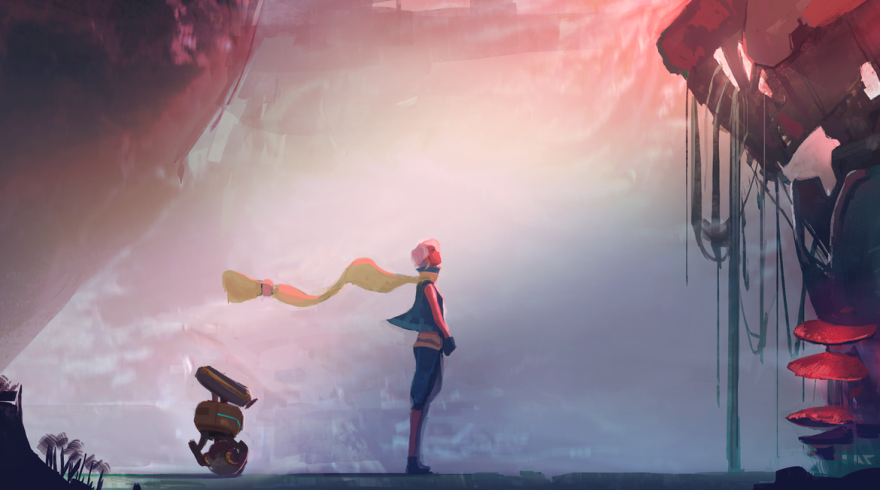 When Daniel Lisi named his new development studio “Game Over,” he was not out of lives but instead just getting started. Their first game, for which a funding campaign has just launched on Kickstarter, is a testament to why we should be thankful.

Failsafe is a first-person parkour adventure. The development team offers a lofty trio of influences: “Mirror’s Edge meets a science-fiction Indiana Jones directed by Hayao Miyazaki.” But after hearing from Lisi and his Failsafe creative director Seiji Tanaka, the inspiration feels more organic than your typical high-concept pitch.

“We started with a story and some gameplay concepts,” Lisi wrote to me in an email, “then went into a prototyping phase where we tested some mechanical ideas … [which] dramatically changed the direction of the project.”

You play as Isra, a young woman raised to be her people’s savior. Wanderlust leads her away from her prescribed path and toward an unknown future. Your journey takes place over the ragged terrain of a scorched planet, beyond your tiny village, where you learn the truth about your people and the secrets they keep.

Wanderlust leads her away from her prescribed path and toward an unknown future.

Tanaka says the story Lisi told him at first has changed dramatically since the project began. But as they built not only a fiction but a gameworld, the story and the mechanics changed to fit one another.

“What matters ultimately, though, is being able to believe that you exist in the universe that we created,” adds Tanaka. “Mechanics and story are equally important ingredients to create that suspension of disbelief.”

One such ingredient that will help immerse players in Failsafe’s world is the perspective. The game’s first-person point-of-view lets you see through Isra’s eyes as she discovers what lies beyond her village’s borders. And instead of a gun barrel impeding your view, all you’ll see are your hands and arms as you whip around the natural environment.

Working out the parkour movement system has been one of the team’s biggest challenges. If they nail the execution, though, they won’t have much competition; Mirror’s Edge has not bred many imitators or innovators in the genre. The lack of competition stems largely from a difficulty in making a first-person game that feels intuitive and fun while giving the player an extreme level of freedom in how and where they move.

“Mirror’s Edge makes the frenetic movement style of first-person parkour more digestible by automating the player’s movement during key movements,” Lisi explains, “so that navigation is clearly defined. This is a fine solution, but as a result ME ultimately becomes a game on rails.”

Game Over studios wants to give players a more satisfying way to navigate their surroundings without overwhelming them with visual information. Tanaka says that “[s]olving this problem requires an intricate coordination between camera movement, character animation, player input, and visual feedback, to name a few.” They saw the fruits of their effort this summer when, at two separate public demonstrations of the in-progress game, they saw players linger over the demo, play a second or third time, or simply watch others play. “I feel confident that we are on the right track to building something that feels very natural and grounded,” Tanaka writes.

The look of Failsafe’s world feels like a cross between Legend of Zelda: The Wind Waker’s smooth, cartoon-come-to-life style and the darker neon of Supergiant Games’ Transistor. In a short amount of time, the team has made much progress in approaching the visual fidelity of their concept art with the natural fluidity demanded of their movement system. That should be little surprise, as Tanaka was lead animator on thatgamecompany’s Journey, another game touting a spare, organic beauty and emphasis on moving through an evocative world.

Failsafe will have a more traditional narrative structure than Journey’s online-driven cooperation, though, relying on voice acting from Ashly Burch (Borderlands 2’s Tiny Tina and Chloe in Life is Strange) and a script co-written by Anthony Burch and spoken word poet Beau Sia. With a summer 2016 tentative release on PC, and console ports likely some time after, we have some time to wait until we learn what motivates Isra to keep running. Until then, cross your fingers that Lisi’s Game Over studio name is nothing but a contradiction.

You can support the development of Failsafe on Kickstarter.