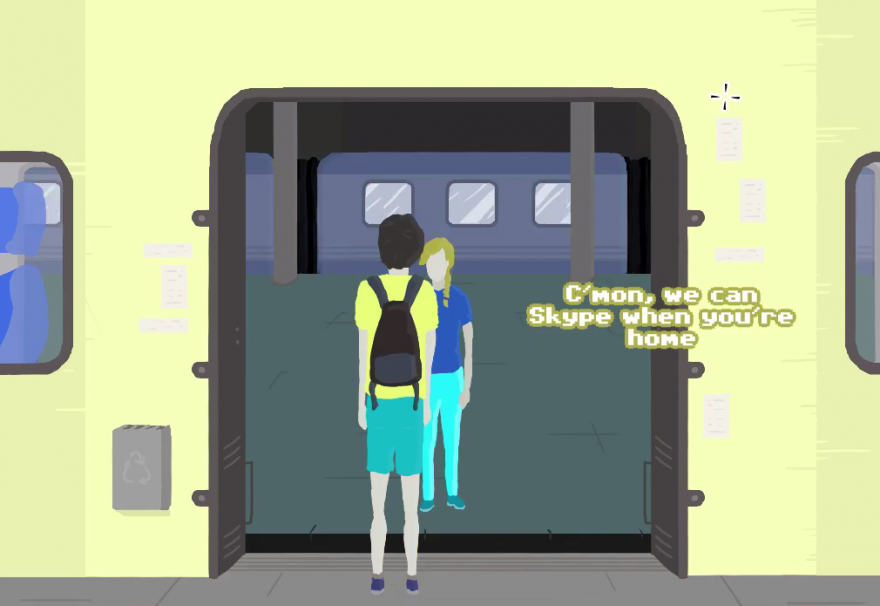 This is the line that hammers out, a single word at a time, every time you open up Alex Camilleri’s autobiographical game album Memoir En Code. It strikes me as an odd objective for a creator to imply to their audience. But, as I think about it, I realize that it’s hardly strange at all. How much of art appreciation has been dedicated to finding out more about the artist’s life?

A lot of it. That’s the answer. When we talk about van Gogh we don’t only speak of his paintings but also the parts of his personal life that informed them. The man seemed to invite it, too, having painted self-portraits and scenes from the places he lived; his personal life is integral to understanding his art. This is the case with many artists, and not just those who paint either, just think about how many pop songs are about personal breakups and new loves (here’s looking at you, Drake).

a snapshot of his past to play around with.

But let’s not be romantic about our study of the personal lives of artists. It has snowballed into something much more grim and disturbing these days: celebrity culture. We no longer want to observe or at least guess at an artist’s life through their work, we want to see what they’re wearing when they leave their house, to stalk them 24/7 so there’s no detail outside of their own heads we don’t know about.

It’s even got to the point that you don’t even have to be an artist for people to be interested in what you’re up to in your everyday business. People often cite Kim Kardashian as an example of this, having become famous due to a leaked sex tape, and rolled with the attention it has brought since. What’s interesting about Kardashian is how she has turned her personal life into a career. It’s almost an art in itself, and this is something that can be understood by playing the mobile game Kim Kardashian: Hollywood, as you have to constantly keep busy, getting new gigs, staying in the public eye, all in order to pull yourself up the celebrity career ladder.

As Gita Jackson writes about the game on Paste: “The greatest asset for videogames as fiction, one that it holds over other forms of media, is the immediacy with which you can identify with people and experiences that are not your own. While books and movies allow you to observe, videogames really allow you to be someone else. With each little tap on my tablet’s screen, I feel like I am closer to experiencing Mrs. Kardashian West’s world.”

there’s a secret message to decode

Going back to Camilleri’s game album, the idea that you can get to know him through a videogame he made isn’t so bizarre with all this in consideration. It’s not like this is the first autobiographical videogame either. Through each of the mini-games inside Memoir En Code, Camilleri gives us a snapshot of his past to play around with. Key to this is learning what the rules in each scene are as they all have their own. In doing that in each scene we come to understand part of what has shaped Camilleri.

One of the mini-games instructs us to press a button to open an umbrella in the rain, but as soon as we do the rain stops. Upon putting the umbrella down again we see that the rain starts up again almost immediately. The rule is that the weather will always contradict your efforts. And in finding this out we get a snippet of Camilleri’s experience with the weather in the Netherlands. This is perhaps the simplest of the mini-games in Memoir En Code but the idea stays the same throughout despite the complexity.

This observation is something I’ve noted before after having played an earlier version of the game and spoke to Camilleri about it. Since then, and this is what makes Memoir En Code more unusual than previous autobiographical games, Camilleri has added a meta layer to the game. It’s why that sentence pops up when the game starts.

What that opening message is really saying is that you should play the game a few times in order to unlock all of its secrets. There are eight “pieces” to unlock by playing Memoir En Code, and when you get them all, you can use the decryption tool that comes with the game download called “Memoir De Code.” As you might guess there’s a secret message to decode that lets you have a “deeper conversation” with Camilleri (he put it in there as testers of the game wanted a “real ending”).

It’s interesting that he dangles his personal information in front of players like this. In doing so he turns it into a commodity. It’s this that gets me drawing parallels to the Kim Kardashian model of celebrityhood and success. The biggest difference being that Camilleri is trading his personal info for player dedication and curiosity rather than straight-up cash. But the idea is fundamentally the same: both artists lay tender their livelihood in order to pull us in and we consume it through media. You could argue that this has always been the case with art but Memoir En Code makes the mechanics of that relationship much more visible, for better or worse.