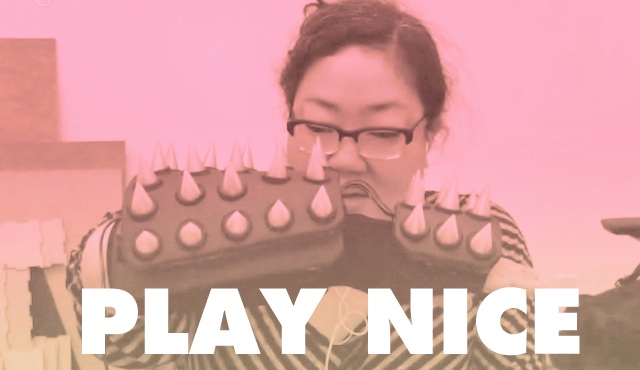 I half-expected Kaho Abe to show up for our appointment in a full suit of barbed armor.

Instead, she was only wearing the “Shredder” glove. It was strapped to her forearm, and she had it held out in a defensive position, as if I were her arch-nemesis—perhaps a member of the Power Rangers, or the Avengers. The glove would fit with the wardrobes of a good many guffawing all-powerful super-villains, including, but not limited to, Ultron and the bassist from Gwar. In fact, the Shredder is a game controller.

The Shredder is a game controller.

Abe calls it the gauntlet, a spiky fingerless black mitt made of electronics and laser-cut foam. Wearing it, she looks on the brink of changing from friendly game designer to a sinister martial artist hell-bent on misusing the planet’s pseudosciences to enhance her godlike abilities. Lucky for the rest of us, her ambitions are heroic.

With her villainess chic arm-wear, Abe wants to save games from the mundanity of hard plastic shells, to replace those blunt dreamless joysticks and triggers, unimaginative shoulder buttons and D-pads with outlandish costumes that “make you feel a little bit badass,” she says. In even the most action-y of action game (think Bayonetta and inFamous), there’s a disconnect between the input device you hold and the carnage you wreak on-screen. After several console generations of quick-time events and chain combos, it’s possible our excitement has flatlined.

Meet the gauntlet. Abe thinks play should feel more empowering, delivering us to a magical plane outside the ordinary. The costume is her way of putting players into what some game designers refer to as the “magic circle,” the conceptual space of play observed by the historian Johan Huizinga.

The costume is her way of putting players into what some game designers refer to as the “magic circle.”

In Homo Ludens, he wrote, “the arena, the card-table, the magic circle, the temple, the stage, the screen, the tennis court, the court of justice, etc, are all in form and function play-grounds, i.e. forbidden spots, isolated, hedged round, hallowed, within which special rules obtain.” In other words, we willingly, if unwittingly, suspend the rules of everyday life when we sit down for, say, a round of Magic: The Gathering. Abe would add that what we wear is important to the ritual, especially when the sacred grounds involve wielding the power of thunder, hurricanes, radioactivity, or demonic chains.

After all, the suit makes the man, and the adage is doubly true for those with superpowers. Superman would be an unmemorable reporter without his blue tights and cape. Abe wants to know how all those preposterous outfits authorize someone to fly and to fight, so she’s researched hero transformations from Japanese tokusatsu. These Godzilla-inspired television shows feature huge casts of kung-fu fighters that look like muscled insects and robots in spandex, doing battle with bad guys named Gel-Shocker, Ambassador Hell, King Dark, and the like. Before metamorphosis, they yell out “Henshin!” (Japanese for transform), and signal with action-figure signum crucis, “some which are super, super complex,” she says.

Though it may look like she’s cosplaying, Abe’s wearable controls are on the cutting edge of computational fashion, an academic, scientific, and artistic field that has emerged over the past few years, exploring how the advent of cheap, smart technology could affect the halter tops and suede oxfords of the future. These high-tech garments are still a long ways away from hitting J. Crew. They include such curios as audible fabric woven from cassette tape, and flexible alkaline batteries that energize poetic suits for space emigration. Stuff you can’t make up.

She wants the equipment to have no buttons whatsoever.

Abe is Japanese, with thin eyewear and black frizzy hair pulled in an unkempt bun. She giggles a lot, which has the effect of making the ordinary seem funny, such as her past career sketching outerwear at Tommy Hilfiger. “At one point, it was a lot more popular!” she laughs, assuring me that her tenure making unhip preppy clothes is nothing to brag about. As we talk, she is taking apart the guts of the gauntlet.

After Tommy, Abe jumped ship to NYU-Poly and began creating physical games like Mary Mack 5000, a wired version of the hand-clapping game played by schoolgirls (and their unwitting younger brothers), and Hit Me!, a game about bopping your opponent on the head. Her blog says it’s a tribute to Jean-Claude Van Damme. 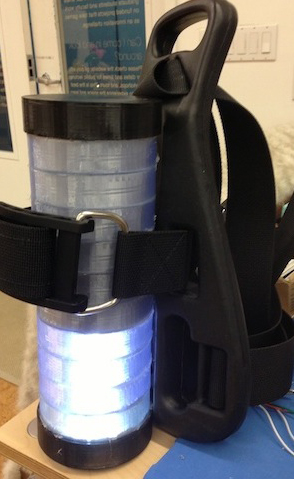 The rare fashion designer that knows her way around a circuit board, Abe definitely qualifies as a DIY hardware hacker, in the same vein of Reed Ghazala and Jeri Ellsworth: kooky inventors who rewire popular electronics into playful frivolities. She shows me how an Android phone fits snuggly inside the cavity of the gauntlet, so it can measure the swinging motion of a player’s arm. She has the gauntlet rigged so a red beam of light shoots forth from your nylon-covered palm. And though the videogame portion of her project is still under works, you’ll be able to fire at your televised archenemy with a twitch of your finger. She wants the equipment to have no buttons whatsoever, instead making use of conductive fabric—pretty much a piece of wire in the form of tape.

If people forget they’re wearing it, it’s not doing the trick.

Ready-to-wear game gear may seem a little, okay a lot, unconventional, but Abe’s experiments in the lab are simply the result of converging interests. “Fashion tells stories. Combine that with technology and you start to think about what happens when costumes turn into game controllers,” she explains as she brings out the second component to her comic book costume. It’s a power pack, literally and figuratively, and it serves as the player’s health meter. Alight with LEDs, it looks like a giant AA battery, with red, yellow, white, and green wires snaking out from its backside. You can think of it as a hydration backpack filled with in-game energy instead of H2O.

The flamboyance of the costume is by design. While principles of ergonomics say that game controllers should all but disappear, becoming transparent and natural in your hands, Abe wants players to remain aware that they’re cloaked in the fully monty. Thus, the spikes. “You can use them to keep people away,” she says. “They’re quite a statement. ‘You better watch out!’”

And if the gauntlet/backpack combo sounds a tad ungainly, it’s intentional. “It’s your role, a new identity. If people forget they’re wearing it, it’s not doing the trick,” Abe tells me. That said, it’s still far more practical than most hero get-ups. (Can you imagine how hot it must be in Iron Man’s tin can on a 90 degree afternoon?) Like stilettos and three-piece suits, superhero couture prioritizes style over comfort.

That’s a small concession to make for looking good while you save the world.