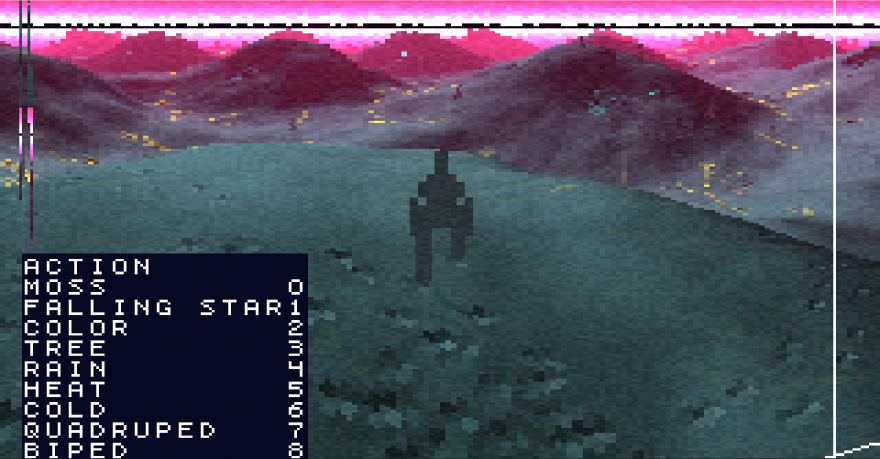 Commissioned for the No Quarter exhibition at the NYU Game Center, Loren Schmidt’s Beads of Orange Glass is now available for download on itch.io. The game is not interested in holding players’ hands through a guided narrative; instead, players shape their experience themselves as they explore the game’s rich textural space.

A two-player game, one player navigates the pixelated landscape while the other adjusts the minimal landscape, triggering rain showers and falling stars, growing moss, and planting trees. Players can change themselves, too—into deer, birds, and trees. Without words, Beads of Orange Glass tells stories through a generated world with random sets of verbs and characters to choose from.

As with other games by Schmidt, then, Beads of Orange Glass puts players in control of determining the rules—at least in some ways—but the game’s system determines part of the story, too. It’s a generative form of storytelling, albeit wordless. And one that puts screen glitches and missing pixels at the forefront.

Similar to Strawberry Cubes (2015), another of Schimdt’s projects, Beads of Orange Glass itself is almost about entirely about those glitches: exploring them and how they move and shift as the game, too, moves and shifts. Glitches change as the color blends in and out, and pour down as rain. And the creator agrees; “the glitchiness seems integral somehow,” Schmidt posted to Twitter. Those moments are where the story comes to life; it’s the imperfect moments of ambiguity that bring forward feelings of something alive.

Beads of Orange Glass is available on Windows for $5. Follow Loren Schmidt on Twitter for more information on upcoming games. Schmidt is currently working on idyll, a game about climate change.