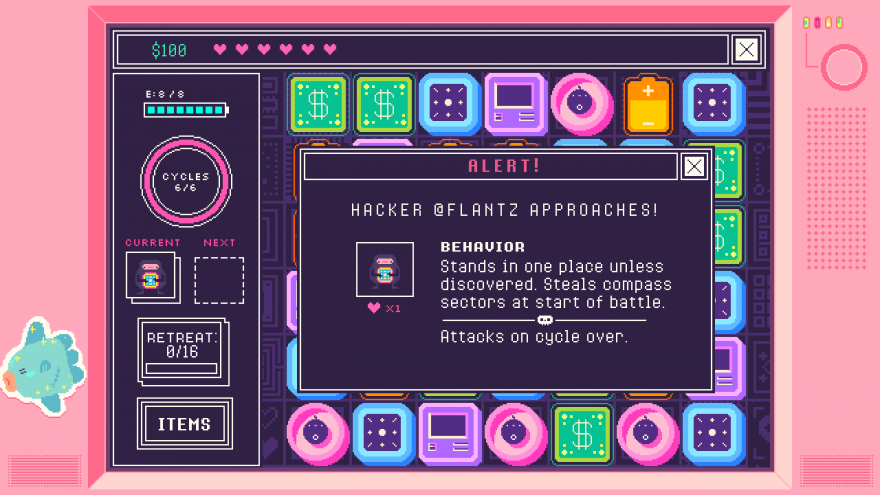 It’s been over 20 years since Jonny Lee Miller screamed “hack the planet” as he’s bundled into a car after his arrest in the movie Hackers (1995). And yet our obsession with hacking hasn’t wavered a single iota. But it is changing. Slightly.

The world of fictionalized hacking has long been presented as a hard-edged world of infiltrating nodes, bouncing between servers, and mashing keys profusely to make progress bars move. This year’s Quadrilateral Cowboy encapsulated that fantasy with its loving recreation of analog technology and command prompts.

about insecurity, both in computers and ourselves as people

But Hexecutable’s hacking game, Beglitched, presents a different vision of hacking, and one that we now know is due to arrive on October 7th. Billed as a “cyberpink adventure,” Beglitched is … adorable? Yes, it’s a hacking game made in purple and pink, cute faces staring back at you as you shift its various nodes around.


In Beglitched, hacking is quite literally a magical affair often purported by internet archmagi. The best of these web-based wizards is the Glitch Witch, and you, the player, are her new apprentice. The game’s website states that the game is about insecurity, both in computers and ourselves as people. This takes the form of a series of puzzles for you to solve in a pastel world of abstracted computer processes.

As we’ve said about Beglitched before, it plays out like a mix of Minesweeper (1989) and a match-3 puzzle game, with the idea being to uncover hackers are hiding with the information you’re after. So, think Watch_Dogs (2014), but abstracted onto a grid, and then given a Tamagotchi makeover. Aiden Pearce, with his dull sweater and brown trenchcoat, could have done with a makeover himself anyway.

Check Beglitched’s website out here. Follow it on Greenlight to presumably get a notification when you can throw money at it.