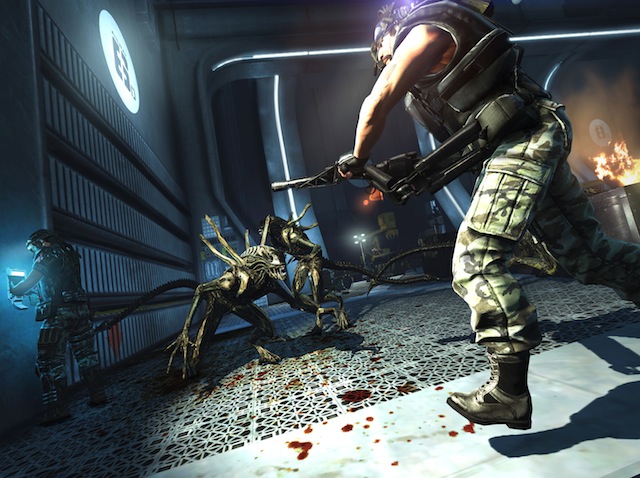 Everyone is pretty much in universal agreement that Aliens: Colonial Marines, the fresh-off-the-presses shooter of the Ridley Scott ilk, is unapologetic schlock, and it is currently getting buffeted in reviews. Complaints about quality abound, and one reviewer claims to have completed a level without ever firing a round.

I’m not here to cast my stone, and I don’t intend to get caught up in the cause célèbre. I’ll just say that the verdict isn’t exactly surprising, given that very few of the Alien licensed games have been any good. . . that is, of course, with the exception of Alien vs. Predator.

Not to be confused with Alien Versus Predator or Aliens vs. Predator (both made at a later date by the same developer Rebellion), Alien vs. Predator, the original 1994 version for Atari Jaguar, was to my budding nerdish mind as the Swanns and Gilberte were to young Marcel. It was an object of voluptuous idealism, in reality probably not as good as the copy of Doom 2 I had at home.

But because it was released on an esoteric and pricy system that my parent’s would never pay for, and because my friend John was in possession of it, I was in his service. He’d invite me over, and I’d obsequiously sit on the edge of his bed and watch him play for hours, in hopes he’d get tired of it and hand me the curious bulky red and black piece of plastic with a number-pad smack dab in the center.

Of particular amazement was the number of ways Alien vs. Predator let you play it. You could play as an Alien and imprison marines in a viscous cocoon, so that when you were killed, a larva would rip out of their body and you would continue playing as it! You could play as the Predator, who naturally had Predator vision, an ultraviolet shaded night-vision that allowed you to be invisible, but scoring kills while doing so meant you were dishonorable, and limited your access to fancy Predator blades like shurikens! You could also play as the human, but who would want to?

After all, we were fourteen and the largest appeal was the idea of the crossover. How this violation of natural order and common sense was allowed to happen alluded me. It seemed impossible that two repellent species from outlying solar systems could become mortal enemies and clash in a comic book that was turned into a game that petrified and thrilled me with gross slimy things. That was the first and last time I cared about an Alien game.