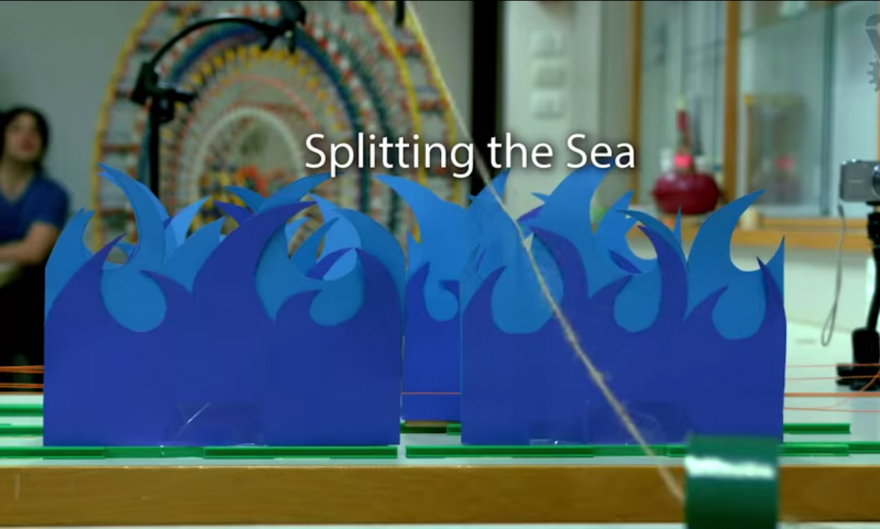 The Passover Seder has two important and interrelated functions: Recounting the biblical tale of the Jews’ escape from slavery in Egypt and delaying the consumption of dinner for as long as humanly possible.

Fret not, peckish listeners to the story of Exodus, Haifa’s Technion Israel Institute of Technology has a solution. Students in the university’s Faculties of Mechanical Engineering and Architecture and Town Planning have created a Rube Goldberg apparatus that tells the entire story—plagues and all—in a brisk two minutes and seven seconds. That’ll get you to the matzo balls in a hurry.

If the contraption was simply lots of fun, it would have been enough for us. The Red Sea literally splits, its two cardboard halves pulled apart by a coffee mug acting as a weight that has been attached to some twine. The plagues—at least those that haven’t gone missing in this retelling of the exodus—are gripping. Plastic frogs and ping-pong balls are launched into the air to represent the plagues of frogs and hail, respectively. Fake blood, made of water that has been dyed red, gives the representation of the Nile’s water turning into blood a soothing, The Shining-esque vibe.

The biblical story visual learners have been waiting for

And if the whole assembly consisted of dominos out of matzo, it would have been enough for us. As it is, these edible dominos are but a small part of the room-sized contraption. Finally, an appropriate use for a food item that was acceptable in the desert but, in 2015, tastes like construction materials!

Oh, but we’re not through yet.

If the students had focused on sending Moses’ “Let my people go!” message to the pharaoh by text message, it would have been enough for us. They did do that, and it’s a wonderful anachronism, but that’s not all there is to see here.

Finally, if this contraption were merely a way of telling the story of the Jews’ exodus from Egypt, it would have been enough for us. The Seder, with its readings and songs, is an educational activity that prioritizes the needs and preferences of auditory learners. But what if you’re a visual learner?

But Technion’s Rube Goldberg contraption is all of those things. It is the biblical story visual learners have been waiting for, which is another way of saying it’s much better than Ridley Scott’s Exodus.