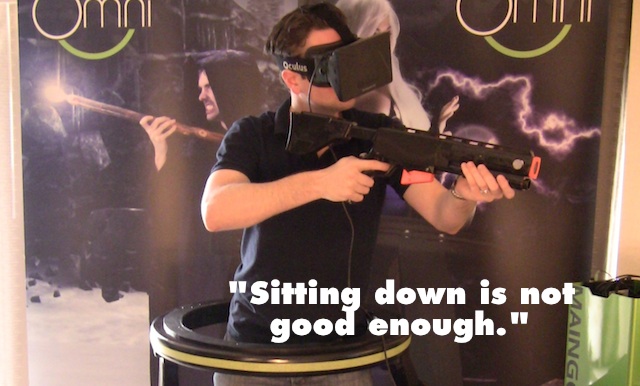 Jan Goetgeluk is breaking with tradition. After several thousands years of inventions designed to decrease the amount of time we spend on our feet, he has created the opposite, an unusual, motorized machine that will turn a physically effortless activity into one that requires the continuous use of both legs.

You can play videogames by walking.

This is the reluctant promise of the Omni, by Virtuix: you can play videogames by walking. Consisting of a mid-sized octagonal platform and a guard rail to keep you from falling, the whole thing looks like a toddler’s walker for adults. But the Omni, whose Kickstarter campaign began earlier today, may, pun intended, take a big step towards putting you, yes you, in the game. The literature describes it as a “Personal Holodeck,” a turn of words that makes me think of having Worf from Star Trek as my personal trainer, and that’s not too free of an association.

While the Omni is essentially an advanced treadmill that lets you walk, jog, crouch, even jump in any direction, Goetgeluk’s aspirations have less to do with a revolution in home fitness than with the revival of virtual reality. His intent is to bring to the living room a low-cost and quiet locomotion device, which have traditionally been these huge, unwieldy, and potentially dangerous contraptions. They’re also typically confined to laboratories, as is the case with the German-engineered CyberWalk, a locomotion device used for serious purposes: gait research, sport sciences, rehabilitation. It’s not a plaything.

Welcome to the Matrix.

Though Goetgeluk has been working on the Omni prototype for two years, long before the spate of renewed interest in virtual reality, the device is intended to be used with the Oculus Rift, a VR headset that basically puts the screen really close to your face, creating the illusion that you have entered the digital dimension, surrounding you with, for example, the swaying spruces and trickling streams of The Elder Scrolls V. (Oculus Rift’s founder Palmer Luckey is allegedly backing the Omni.)

Yet another device, and a different game (Team Fortress 2), are recommended for the optimal experience. This requires a Razer Hydra, a motion-control device that Goetgeluk has rewired inside the shell of a plastic rifle. Step into the Omni, strap on the headgear, secure a toy gun, and welcome to the Matrix.

Of course, the obvious question is why anyone would go through all that when he or she could simply pick up a gamepad and look at the TV. Modern open-world games can be enormous. Walking around the edge of town in Grand Theft Auto: San Andreas will easily take over an hour. Far Cry 2’s jungle terrain is five miles wide. From top to bottom, World of Warcraft’s map spans two continents and is a nine mile hike. Better take a canteen and some trail mix.

Good luck convincing your significant other you need to park the Omni next to the loveseat.

Besides, the idea of walking, physically walking, to get around in a videogame sounds a little, okay a lot, eccentric. Good luck convincing your significant other you need to park the Omni next to the loveseat. Such a living room obstacle seems unnecessary, since all that is required to activate an avatar is the forward gesture of one thumb. Furthermore, if it’s virtual reality, why not just beam ourselves from point A to point B at the press of a button? Walking would become pointless if we could fly.

Goetgeluk’s biggest challenge is to coax complacent gamers from the couch. To do so, he provides familiar alibis. The Omni “makes any game more immersive.” It opens “virtual worlds” for you to explore. It will “release the full potential of virtual reality.” He tells me that “sitting down and pushing buttons–that’s not good enough.” He goes into how he’s “been working around the clock” developing the Omni, that his “whole life has been taken over by it.” Like any scientific mind, he seems genuinely driven by the pursuit of pure discovery, if of a less imperative kind: What mysteries lie untapped in virtual space?

It helps to think of it in terms of city design. Before moving to Houston, Goetgeluk resided in Ghent, a quaint Medieval city in northern Belgium with cobbled streets, cathedrals, and cobalt blue canals. “You walked everywhere, much more than you drove,” he explains. “The cities are set up and planned in a way that life is centered around a city center. Parking is hard.” But now that he’s relocated to the heart of Texas, he tells me, “You have to drive to go anywhere. There’s not very much walking down here.” Speaking as someone who likewise lives in a part of the nation where cars are mandatory and you’ll occasionally see people driving to their mailbox, it’s a radically different vibe.

What would the first first-person walker entail?

At this premature stage, there are more questions than answers. What would the first first-person walker entail? What if your character couldn’t run thirty miles-per-hour, but more like four or five? How many kilometers is it to walk from one side of Skyrim to the other? Goetgeluk admits he hasn’t done the math. That’s yet to be determined in the frontier of walking and game design.