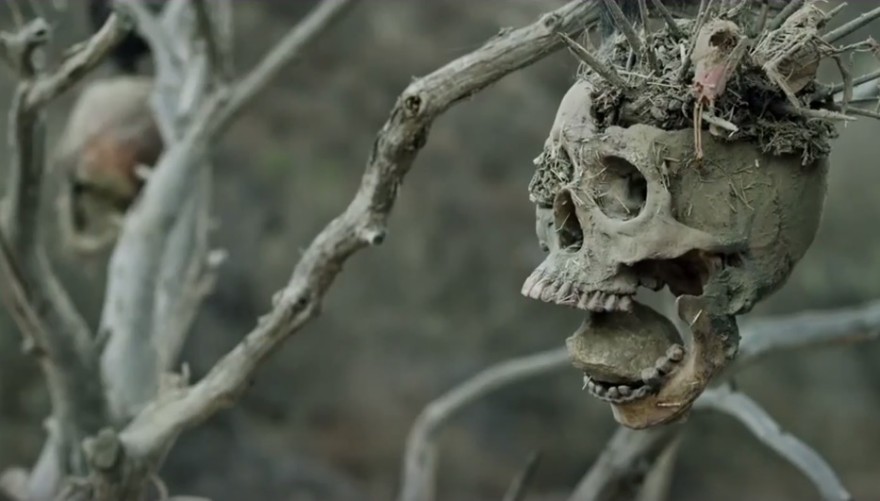 Bone Tomahawk is stacked with talent: since 2010, writer/director S. Craig Zahler has been writing books that garnered praise from old-guard splatterpunk guys like Jack Ketchum and Joe Lansdale, and the film’s cast includes Kurt Russell, Richard Jenkins, Patrick Wilson, and a brilliantly smarmy Matthew Fox all chewing into a sharp, witty script.

This movie takes its sweet time before erupting to an absolutely grotesque explosion of violence; Zahler lets the characters banter and argue under a thick cloak of dread for over ninety minutes. He successfully updates the cannibal movie in grand style; Tarantino wit and good old Kurt Russell lull you into thinking you’re safe. Then the butchery begins.

What I’m saying is, if you’ve already burned through Cannibal Holocaust and The Man From Deep River this Halloween season, Bone Tomahawk is where you want to look next. Extreme cinema this surefooted doesn’t come along often enough.

The violence is hardcore. At Fantastic Fest, Zahler namedropped 1988 exploitation classic Men Behind the Sun as a tonal reference point, and the matter-of-fact brutality is indeed in that lineage. It’s affectless and almost clumsy: hands get lopped off at the corner of the shot, arrows thud into bodies unceremoniously, and a scene of butchery is rendered in flat, nauseating detail. The gore isn’t salivated over. The camera doesn’t cut to show you the bow being readied; it doesn’t show you where the threat is. It simply intrudes into the frame.

violence intrudes into the frame

Zahler’s affectionate toward the western, but his script also harbors no illusions about its history of racism (a place where westerns dovetail with cannibal films) and historical whitewashing. There’s a vein of revisionism lurking beneath the surface of Bone Tomahawk. The casting of Kurt Russell ropes in his history as an action star, and the plot, such as it is, follows four men in search of a woman. When they find her, though, she gives a scathing monologue about how fucking stupid they are for waltzing into a den of barely-human cannibals with nothing but a couple of guns and no plan. When it becomes apparent that Kurt Russell might die—well, in this context, that’s pretty fucking scary.

There is no glory, no nobility at the end of Bone Tomahawk. There’s only death, fear, and trauma. No one rides into the sunset; they limp home, and they may not even make it there.

Bone Tomahawk is now on VOD. Also, look at this poster.