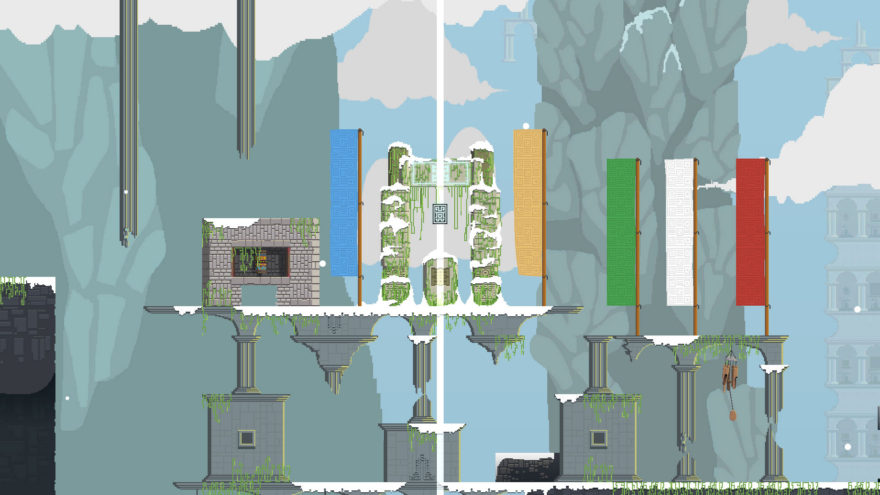 In Tibetan Buddhism, the space between death and rebirth is called bardo, a liminal period containing six—or four, depending on the source or scholar—different states, experienced in phases from birth to death to rebirth. This “limbo” is a journey in multiple senses, both to a spiritual conclusion and to a physical resurrection. British developer Blind Sky Studios explores this in-between space in Mandagon, a freeware game released earlier this week on Steam.

As detailed in a blog post, Mandagon was born as the personal project after one of the team members suffered a death in the family. The game shifted from being a garden variety collect-a-thon to a more environmentally-focused experience, with an emphasis on atmosphere and exploration. That’s when Mandagon was born.

Story, memory and other mortal things fall by the wayside

Despite having no connection, a couple of comments on Mandagon’s Steam page compare it to Fez (2012). I see where they’re coming from: the vertical pixel art has much of the same feel, as does the way the player character disappears into doors, the rooms beyond displayed as a dimly lit box on a black screen. Besides those surface similarities, though, they’re vastly different. Mandagon doesn’t bother with Fez’s 2D-to-3D gimmick, and nor does it hide narrative progress behind inaccessible puzzles. In fact, much of its appeal is in its calm. The full map is quickly accessible, the goal clearly laid out; what’s given to you is the journey.


Games that keep lots hidden encourage rushing, as the insatiable need for knowledge turns illuminating dark parts of the map into a kind of compulsion. The most beautiful game with the most intricate details can be unintentionally interrupted by a flashing quest marker or one too many unmarked doors. Mandagon, in being inspired by Tibetan Buddhism, does the opposite. There’s a brief introductory scene, just a short vertical climb to familiarize you with the controls, and then you’re given a map, a goal, and what’s in between.

Mandagon’s plot isn’t readily apparent. It’s revealed to you in whispered couplets, hidden out of the way, often far from the keys and totems you need to proceed. Failure to find all of these pieces or finding them out of order fractures the story in a way reminiscent of oral history, or déjà vu: we know the players but don’t understand at the plot, or the other way around. It’s very possible to finish the game without encountering the story at all. This works to Mandagon’s advantage, as the verticality and ambiguity combine to make an experience that, for once, there is no pressure to rush through.

And its state of limbo is key. Quiet music and ambient landscape blend together to push the journey above all else as your character ascends rattling wood elevators, sinks deadweight in water only to be pushed up by a stream, and jumps empty gorges with nothing at the bottom but the chance to try again. There’s no death, no enemies. You can startle little crows, if that suits you. There are houses to enter, and totems to find, and great gold birds that give you the temporary power of flight. Story, memory and other mortal things fall by the wayside. You go up.

Find your way through Mandagon on Steam.