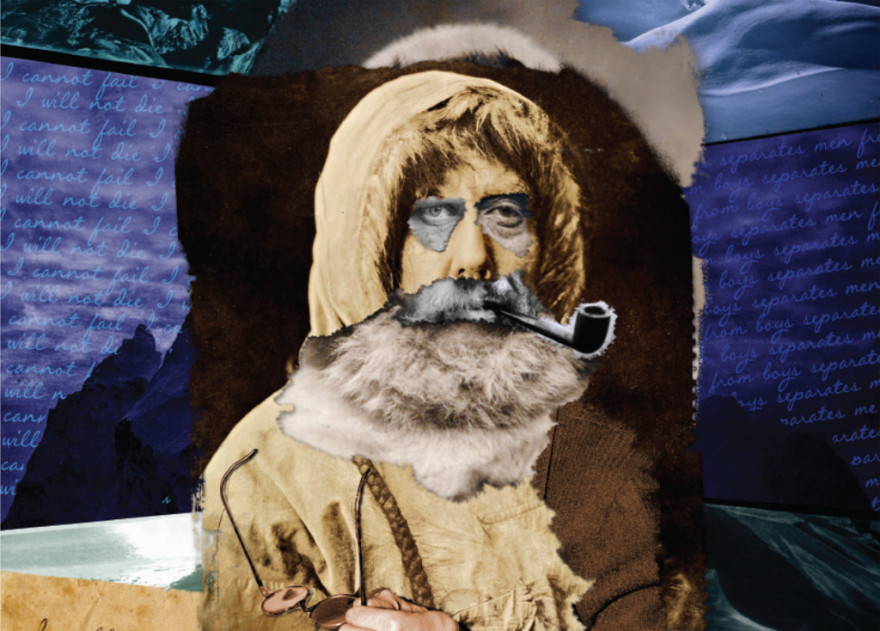 In the glacial caverns beneath a polar research facility, someone hears a distant groan. No, that’s not right. Maybe she hears laughter instead, but that goes against the tone of the piece—an air of mystery with a heavy sense of foreboding. Distant whispers… no, faint whispers breathing through the ice makes far more sense. Changing that bit of language, of course, only fits one particular moment in a much larger narrative. Still, it feels significant enough given the delicate nature that comes with editing a novel—especially one written by the author’s digital ghost.

Such are the considerations needed in The Ice-Bound Concordance, a game and accompanying book by Aaron Reed and Jacob Garbe that tasks the player with reconstructing the lost novel of the deceased fictional author Kristopher Holmquist. Holmquist’s posthumous fame generates interest in Ice-Bound, his unfinished magnum opus, and most significantly, leads to the creation of KRIS; a simulacrum meant to mimic Holmquist in order to finish the novel. Highlighting certain imagery (environmental objects, characters’ possessions, etc.), the player chooses points of focus for Ice-Bound’s narrative, and each choice ramifies as the player helps the AI unlock new chapters to build and order the book from incomplete data.

a game about the tension between authorial intent and editorial obsession

Aiding in this digital project is the physical book The Ice-Bound Compendium, a sort of forbidden text replete with ambiguous imagery and background information on Ice-Bound and its author. At times, KRIS asks the player to find pages of the Compendium that contain hidden symbols relating to themes of the novel, and showing the book to KRIS (through either the player’s iPad or computer camera) decodes any AR information hidden beneath the mass of symbols and words. This transmedial network of information forms the basis of the player’s work in aiding KRIS in its project of unlocking its dead counterpart’s incomplete novel.

And delving into The Ice-Bound Concordance is indeed work. As I played the game, I settled into a steady mechanical rhythm of designing a chapter, locking in editorial changes in language, and then combing through the unintelligible pages of the Compendium to set up my next effort on the upcoming chapter. Much like actual editorial work, helping KRIS is tedious and inelegant, and the book itself becomes a tool to aid in navigating the crude alleys of a partially-written novel.

On its own, the tedium of The Ice-Bound Concordance would not be enough to carry the text to any sort of end beyond exploring the well-trod intersection between play and work. Instead, the game focuses on narrative layering in a way that attempts to discover the compulsive allure of difficult texts. The echoes of Danielewski’s House of Leaves (2000), Nabokov’s Pale Fire (1962), or Borges’ Labyrinths (1962) are fairly apparent, but present also are the interests of electronic literary experiments like Shelley Jackson’s Patchwork Girl (1995) or Michael Joyce’s Afternoon: a story (1994). Like these artists and their respective works, Reed and Garbe use The Ice-Bound Concordance to prompt its player to embrace the pleasures that come with deciphering, or maybe just interacting with, texts that actively resist comprehension.

The source of The Ice-Bound Concordance’s difficulty comes from its complicated structure. At the basest layer, the player works with the AI to complete the chapters of the novel, and each chapter has its own narrative that influences the later chapters due to choices in subjects or theme. When I put together a chapter in which a soldier thinks he interacts with his twin brother’s ghost, for example, I consequently expand on a theme of doubles and duality that I had only gestured to in the previous chapters. That theme alongside the spiral imagery I kept inserting developed further into a supernatural drama I did not predict, steadily uncovering more strata of narrative complexity beneath the ice.

As the player excavates the novel from the singular mass of data, the AI KRIS starts to question its role in the whole process and what will happen to it once its goal is realized. After I helped it resolve a particularly dense chapter, KRIS pondered the motivation behind its creation, wondering, “Maybe they think they’re fixing me. Sculpting me into a thing they can use. A machine for finishing Ice-Bound. A machine that’s broken because it’s got too much tragic childhood. Not enough self-confidence. Too many sharp-edged memories.” Helping KRIS reconcile his human desires with his digital existence adds another narrative dimension to The Ice-Bound Concordance’s baffling structure, albeit one not as interesting as the content of the novel itself.

there are systems at play beyond the human faculties of language

Holding these spheres together is the metanarrative of the player’s work, which in my case was one of constant frustration. While KRIS wanted to write about “human dignity” and “going it alone,” I fought to keep the focus on the aforementioned spiral imagery and ever-growing threat of existential horror that haunted dark places below the facility. KRIS cared more about character flaws as they related to the personal sins of the writer whose mind the AI was meant to emulate, but I found its quest for self-discovery a dull moral tale about the need for humanism in the process of artistic creation. KRIS and I fought constantly, each of us vying for authorial control until we landed on an ending that disappointed the both of us.

Ultimately, it was my struggle against KRIS that interested me most in The Ice-Bound Concordance. Even as that damn program insisted that “endings are the crux of this matter” and warned me not to “get distracted by the medium” because “it’s the material that’s important,” I found my time spent trying to use the book to redirect the program’s focus to fit my needs far more satisfying than coming to any sort of end. All of this is by design, of course, though the heavy-handedness of KRIS’s direction over-explains the themes of the game that were already revealed organically. Indeed, if The Ice-Bound Concordance has any noticeable flaws, they appear in the occasional pontifications about the toil of creation that are a bit too obvious, or with a few supposed tricks that are far too telegraphed in their method. But such observations may reveal more about my own hubris than it does an actual flaw in a game about the tension between authorial intent and editorial obsession.

I suppose such revelations about my own role in the excavation of Ice-Bound simply adds another layer to the damn near impenetrable palimpsest that is The Ice-Bound Concordance. I have been enjoying this sort of renaissance of text-based games from the unflinching realness of Depression Quest (2013) to the surreal nightmare of Mastaba Snoopy (2013). These reflections on some of the earliest experiments in electronic literature show how language still remains just as provocative and intricate as any system of play, and Reed and Garbe’s extraordinary work rests comfortably among the best of its genre.

That said, after my time with The Ice Bound Concordance, I cannot maintain that the game matches the transcendent language games of Borges or the provocative textual experiments of Nabokov and Danielewski. But to dismiss Reed and Garbe’s work as valuable only in ambition would be a mistake. There’s something troublesome at the heart of The Ice-Bound Concordance that rests in the space between the physical copy of the book and the way a machine can see patterns and forms beyond the player’s perception. The complicated networks of mediation reveal that there are systems at play beyond the human faculties of language. From the actual mechanics of printing and editing to the complex codes that run software required to read the physical Ice-Bound Compendium, these unseen forces aiding in the processes of artistic creation trouble our concept of the single author.

After all, we can never read Ice-Bound in its native form because it only truly exists in the raw data of the computer program and the obscure iconography of the compendium, each only readable when filtered through the computer. For us, that text will always be just beyond our scope of understanding—formless, changing, and warped as if it is partially obscured behind a translucent sheet of ice.