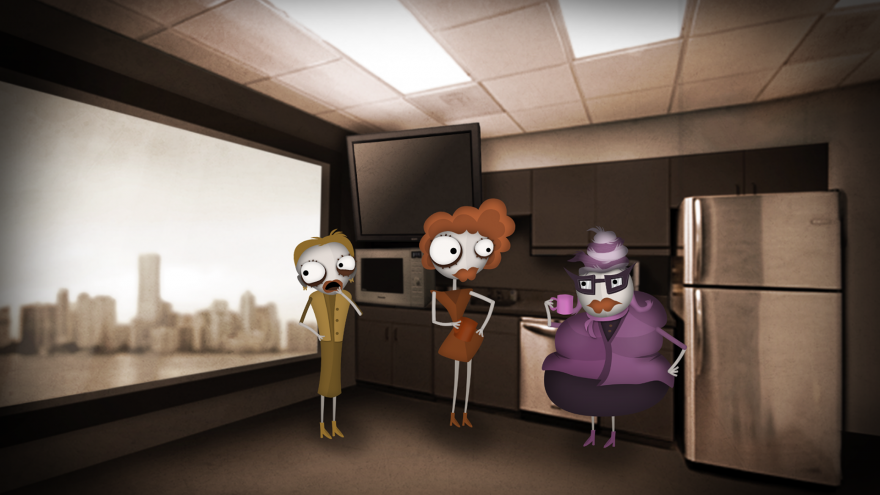 Tomorrow Corporation already showed an aptitude for making players do small, seemingly innocent tasks that fuel a nightmarish machine with Little Inferno. In Little Inferno, you must solve destructive puzzles by burning an unlikely array of objects to unlock more objects to be burned in their Little Inferno Entertainment Fireplace. Though progression relies on the unspeakable joy of watching something like a miniature opera singer toy explode mid belt, the story satirizes an industrial system built on waste and consumption.

Now, the team at Tomorrow Corporation is bringing their adorably dreary aesthetic to the workplace in Human Resource Machine, a puzzle game about a flesh and blood automated labor force. Arriving tomorrow, Thursday October 15th, for Windows and Mac (with a Wii U version coming the following week), the game reimagines a workplace as a machine fueled by human programmers. The gigantesque office complex represents a computer’s CPU, while you provide the inputs and outputs and the slots of data storage in the center symbolize memory. Through just 11 simple commands used throughout the game, the creators claim you can simulate any algorithm in the world (and probably many the designers never thought of themselves.)

another menial promotion in your slow crawl up to corporate ladder

As a lowly programmer, you must solve the binary puzzles given to you by your fat cat boss. Of course, despite your lack of power as a programmer, you are solely responsible for making the operation run smoothly, while your boss sits back and barks orders. Each level you beat represents another year passing, and another menial promotion in your slow crawl up the corporate ladder.

While Human Resource Machine satirizes the structure and underlying principles of corporate America, Tomorrow Corporation also sees a certain elegance in the system. “Computers are really simple—beautiful and cleverly designed—but really simple things. And a modern workplace weirdly works as a pretty close metaphor for what goes on inside a CPU,” Kyle Gabler told Nintendo Everything, who you might also know from the team that brought you World of Goo.”

Though Human Resource Machine is first and foremost a fun puzzle game, it can also serve as a lesson in basic programming for the uninitiated. Which, as Kyle Gabler says, is a good thing because “the robots are coming. And what’s a good way to survive the invasion? Learn how to program! Stay relevant in today’s modern world! Or you will be deprecated.”

In an interview for Kill Screen about Little Inferno, Gabler points out that a big part of Tomorrow Corporation’s aesthetic relies on a visually limited perspective—like one room in an office building or a furnace—that allows them to “dribble in bits of a huge and wonderful and scary world that’s always just out of reach.” So you can rest assured that there is more to Human Resource Machine than meets the eye.

You can buy Human Resource Machine this Thursday through Tomorrow Corporation’s website or wait the following week for the Wii U release.