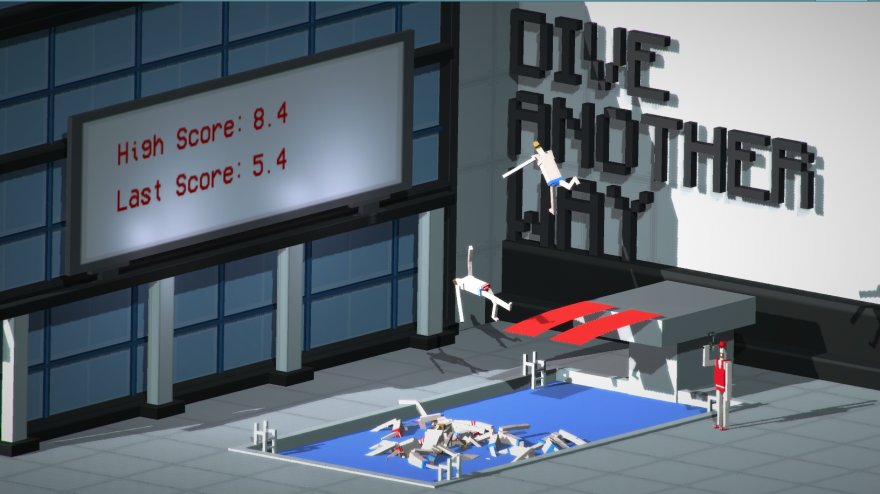 When it comes to the summer olympic sports, diving might not be the first event that gets your heart pumping. After all, those incredible gymnasts have all those fancy, flashy costumes and the competitors in the 100 meter sprint appear to pull of super human feats. All in all, other events can simply dwarf how awesome and how much skill is required to pull off a perfect dive.

But fear not olympic divers, because videogames are here to rescue your image. In the game jam entry Dive Another Way (by Max Wrighton, Gian Dbeis, and Remy Stuurworld), two players attempt to synchronize their jump together by throwing their phones up into the air. It’s a game that combines all the excitement of probably breaking your phone and the joys of ragdoll physics and brings it to the honored sport of diving! (Though the creators are careful to note that “We take no responsibility for property damages. Play at your own risk.”)

The game’s setup is simple (though not safe) enough. The dive countdown begins once both players are ready. After throwing their phones into the air, players are expected to catch it (which the instructions point out is an “important part of the process.”) Hopefully, when all is said and done, the player will have cause to celebrate and not just cause to call their cellphone insurance company.

As the name implies, Dive Another Way really piles on the pixelated carnage. Aside from the potential murder of your cellular device, there’s also a decent amount of corpses in the game after you’ve been at it for long enough. Every diver that makes his haphazard leap into the air, limbs flying up in a chaotic mess, must also inevitably come crashing back down to earth. After its done, his lifeless body remains floating in the gently moving water.

“We take no responsibility for property damages.”

Past divers don’t even disappear; the corpses just stack up on top of each other, until the divers eventually start jumping into an indistinguishable mass grave of their own fallen brethren, before becoming one themselves. It’s a disturbing image, but somehow made hysterical by the ragdoll physics. Some divers don’t even make it into the water. Like a hatching baby sea turtle that dashes toward the opposite direction of the ocean, these unfortunate divers flop around the diving boards without ever fulfilling their true purpose or even getting a single toe wet.

To add insult to injury, the creators decided to add the goofiest sound effect possible to score this horrifying death march to the diving board. “Splooooooosh,” intones the voice of a man who can only be described as Tina Belcher’s husband.

You can play Dive Another Way for free on your Android (at your own risk).