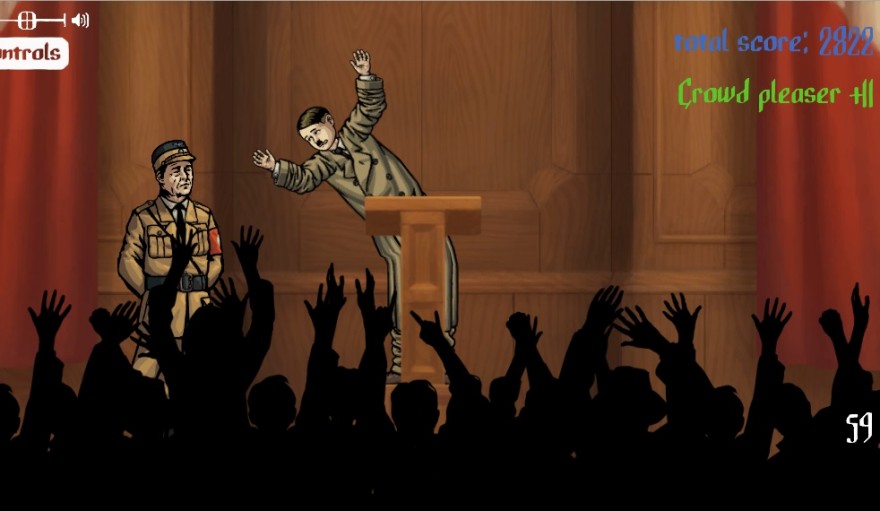 After years of “gritty” dude-culture jests and pop culture clichés passed off as jokes, videogames had a couple attempts at genuine comedy recently. Jazzpunk is a carnival of Mel Brooks gags, Cold War paranoia, and John Kricfalusi’s fantastic grotesquerie. A theorist will tell you that it’s certainly funny even if it doesn’t make you laugh out loud. It could be studied and the construction of each punchline dissected to conclude that, yes, there is a society of jokes residing inside this game’s code and art.

Another significant attempt, and the one that’ll serve as a comparison here, is Octodad: Dadliest Catch. It’s a stand-up comedy done literally; in that, the humor is in literally trying to stand up. Octodad’s tentacles slip and slide as he wrestles with the upright posture and dadly duties of the Homo amans.

There’s an enormous hole that Schloter sensibly avoids for the sake of the comedy.

His boneless body and garbled speech is utterly octopus to us, but his fine suit fools his loved ones and the rest of the game’s population. It’s this performance of the adult human body that acts as the ridiculous incongruity at the heart of Octodad. It’s also found in Damian Schloter’s Double Hitler.

The joke is a classic. Two rascally boys pass off as an adult by stacking up—one stood on the other’s shoulders—inside a long overcoat and by wearing a fake moustache. You have two sets of controls: One moves the boy at the bottom left and right with careful shuffles, the other attempts to grasp the flailing imbalance of the boy on top. It’s obvious that this is a body of two separate halves, yet the game’s straight-faced instructors are oblivious to this fact unless you wobble too far and topple to the ground.

This is the limits of Double Hitler‘s humor and its expiry approaches fast as it soon becomes nothing more than frustrating. You might think that there’s a “Hitler’s Only Got One Ball” brand of comedy here, too—the type that’s been posthumously cutting Hitler down to a contemptible size for years—but it doesn’t really work. There’s an enormous hole that Schloter sensibly avoids for the sake of the comedy.

In this universe, these two boys are to blame for Hitler’s atrocities including the holocaust. Deliberate or not, this goes some way to excusing this icon of evil, the man behind the 20th century’s darkest acts, of his millions of murders. It implies his plans for world domination and genocide were boyish, naive, and therefore somewhat forgivable.

Worryingly, this implied joke is probably funniest to Nazi sympathizers rather than, you know, everyone else. This is almost certainly not intended and is probably the result of an impetuous attempt at political humor. In truth, Double Hitler would be just as funny (and much less questionable) if the two boys were passing off as an ordinary adult. It seems strange that we’re trying to be the best Hitler we can be. It would only have taken a level set in a concentration camp, or one involving more outright murder rather than what’s merely implied by the premise here, for the “joke” to have probably gone too far. And levels like that would certainly have worked within the game’s framework.

Videogame comedy is still finding its feet; that’s for certain. It’s inevitable that as it grows there will be many more attempts at social commentary underneath its silliness. That’s why it’s best to heed the words of humorist Mary Hirsch, who compares comedy to a rubber sword, as it “allows you to make a point without drawing blood”. Double Hitler is, perhaps, a reminder that videogame comedy—this apparent rubber sword—can be double-edged if not handled with care.

You can play Double Hitler over on Newgrounds.