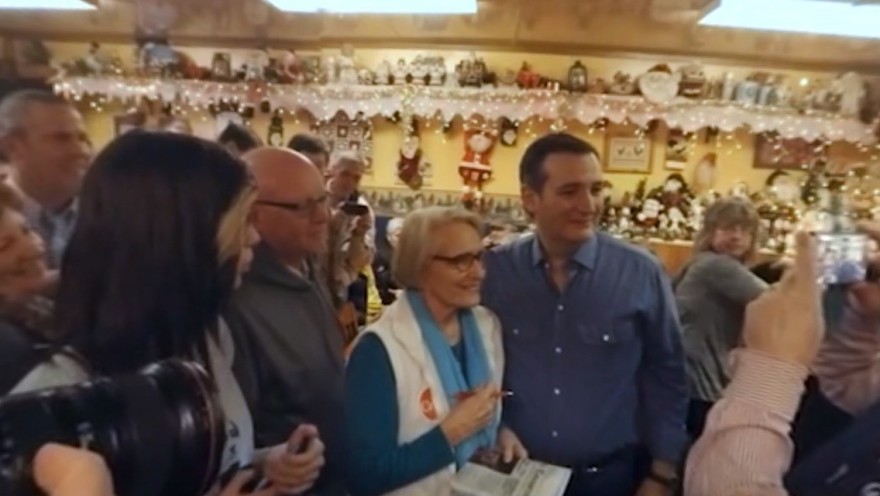 Don’t look now but Ted Cruz won the Republican vote in the Iowa caucus. (At the time of writing, Hillary Clinton and Bernie Sanders were on track to split Iowa’s Democratic delegates.) Or maybe you want to look. I don’t know you or your political views. At the very least it seems safe to bet that at some point during this interminable campaign, which is still very far from over, you have wanted to turn away from a candidate. Just for a second, for your sanity.

Thanks to the magic of virtual reality, you can now turn your back on leading presidential candidates as much as you want. The latest film on the New York Times’ NYTVR app takes you into the crowds of the frontrunners’ campaigns: a diner with Ted Cruz, a stadium with Donald Trump, and anodyne event spaces with Hillary Clinton and Bernie Sanders. Using a Google Cardboard headset (or just the app and your hands), you can spin around and see how audiences react to the stump speeches and guest entertainers. This makes sense insofar as democracy is actually about the voters.

Easter eggs hide at the periphery of every scene

The level of political insight to be gleaned from NYTVR’s narration is minimal at best. It turns out that Donald Trump feeds off the raucous energy of large venues whereas Cruz prefers more intimate meet-and-greets. In other news: Hillary Clinton uses a bevvy of surrogates on the campaign trail. Who knew? But this latest installment in NYTVR’s growing collection isn’t really about advanced analysis. It exists to give you an idea of the mood in these rooms. For all that campaigning is democracy in action; the distribution of primaries all but ensures that most of the citizenry will never witness this sort of fevered campaigning firsthand.

In terms of filmmaking, NYTVR’s approach to the presidential campaign is not particularly exciting. The camera sits still in the midst of the crowd and you can spin around its axis. The net effect is more panoramic than it is immersive. (One wonders, however, how the New York Times managed to bring a VR rig to campaign events without constant mugging to the camera from the crowd.) While the film’s individual scenes may be a touch lackluster, VR gives you the ability to look around in search of weird reactions. Easter eggs hide at the periphery of every scene: an audience member staring too intensely, a photographer tuning out the event to focus on his footage. These elements don’t add up too much of a film, but they bring enough amusement to suggest that NYTVR is contributing something to this campaign season.

Oh, and as a bonus, you get to witness this proto-fascistic Donald Trump song-and-dance number performed by three small children in virtual reality. Turn around and see if the audience’s reaction matches yours:


You can download the NYTVR app on the App Store and Google Play.