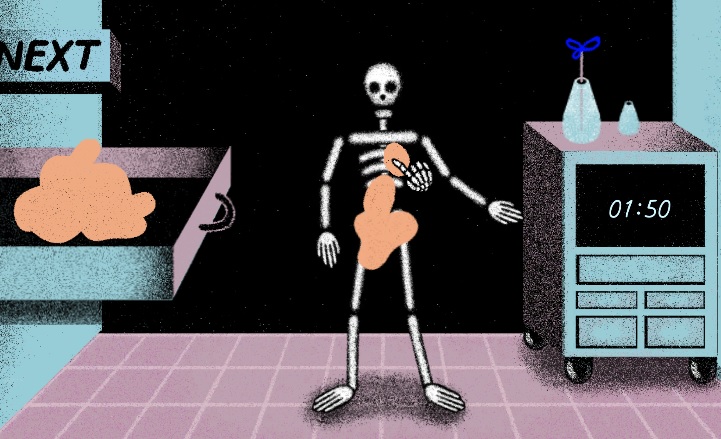 Ever had one of those nights where—no matter what you do, how you accessorize, in sweats or dressed to the nines, after a good day or a bad one—you still feel like nothing but a skeleton with skin crudely stretched over your bones? To make matters worse, this is the sort of night you can’t avoid; giving up on your plans is unthinkable (it’s your final college hurrah, your friend’s engagement party, your own birthday), even as you struggle to make yourself feel and look like a real person.

Those nights you are reduced to a shambling sham of a human being, unable to pass for a fully-fledged self. Then you may find solace (and/or amusement) in Dress Code Human, an endlessly replayable web browser game created by Elenor Kopka, Lucas Descroix, and Konstantin Kopka.

In Dress Code Human, your objective is simple: you have two minutes to get dressed for the party of the millennium. The dress code? Human. Will you make it? The game begins with a skeleton awaiting decoration as the timer begins to count down. An open drawer of shifting, oozing flesh-colored blobs with which to cover your bony self is the first stage of party preparation, followed by smaller details such as clothes, accessories, and facial features to mix and match.

Remake and remake and remake yourself; choose between covering your bones in skin from head to toe or leaving some bare, giving you more time to choose a hairstyle, a tattoo or two, and which mismatched eye goes where on your body. After two minutes, the party begins.

I looked at the man I created, his lumpy face and slightly overlapping eyes, his still-skeletal hands, the lone boot I was able to put on one of his feet before time ran out. I’m thinking, ‘I’m not convinced.’ But then the room falls away, the skeleton starts to dance, and others fall in around him. They, too, are not fully-formed, with fleshy torsos but unadorned legs. A stray eye has found its way onto one of their arms. But they dance anyway.

So, on those nights where you almost don’t make it out the door, when your person suit leaves you feeling unreal and exposed, just remember: everyone, not just you, is doing their best to look like a real human. Don’t miss out on the party of the millennium.

Get ready for the party by playing Dress Code Human here.