The day of your mission has finally come. You wake up, brush your teeth, pack your bags, go through security, and board your plane. You touch down at your destination, gather your things, and board a shuttle to the nearest train station—only to be arrested by “military personnel” and escorted away cuffed to a mysterious metal briefcase.

But you’re a member of the notorious paramilitary group The Black Watchmen… these kind of things are to be expected.

No this isn’t reality—it’s alternate reality. The Black Watchmen is one of the latest and more promising entries into this particularly 21st century genre of game: Alternate Reality Games, or ARGs as they’re commonly called.

ARGs began to emerge at the turn of the millenium, defined by their use of transmedia storytelling—think late night text messages, creepy packages at your front door, cryptic videos, and so on—for creating a novel and often highly emotional game experience.

Throughout the game, both creators and players collaborate to suspend disbelief in the name of creating a convincing alternate reality, an aesthetic that’s been termed This Is Not A Game by ARG enthusiasts.

To get an idea of what an ARG is like, and the potentially profound impact it can have on its players, look no further than the mind-bending 2013 documentary The Institute, which told the story of San Francisco based ARG The Jejune Institute. Made by avant-garde artist Jeff Hull, the game lasted for three years and included more than 10,000 participants. Players were first sent down the metaphorical “rabbit-hole” to the game via suspicious flyers that led potential participants to a cult-like induction ceremony hidden in the backroom of a downtown skyscraper. 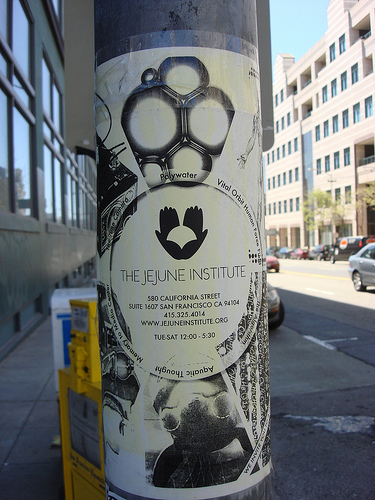 From there, the story evolved into a five-chapter saga that featured live events such as a 250-person faux-protest against the Jejune Institute through downtown San Francisco, intensive puzzles that led players into the darkest and deepest reaches of the city, and a final “Socio-Engineering Seminar” in 2011 that took place in a corporate hotel event space.

Throughout the documentary, the ex-participants interviewed look back on the project with a palpable nostalgia—not to mention confusion over what was in fact real or an artificial part of the experience. One participant even tattooed one of the concepts from the project on her wrist to serve as a constant reminder of her experience.

Besides The Jejune Institute and a few smaller projects, most ARGs have been limited to being sophisticated but one-off marketing gimmicks. And it’s not hard to understand why: ARGs’ inherent unpredictability and complexity make them nearly impossible to fund for any extended period of time without a corporate sponsor. Yet after a decade of being stuck in a cycle of corporate dependency, crowdfunding via Kickstarter has helped to spawn The Black Watchmen, one of the first major persistent and stand-alone ARGs in the genre’s short history.

Made by Alice & Smith, one of the most respected names in the ARG community, The Black Watchmen is an independent but loosely connected spin-off of their previous promotional ARGs for the online game The Secret World.

As a player, you’ll become a member of the eponymous group, a shadowy paramilitary organization that is hired by global secret societies to help solve the unexplainable. Andrea Doyon, the so-called “Puppet Master” of the project, says they’ve drawn from TV shows such as The X-Files and Hannibal and the works of HP Lovecraft for creative inspiration in crafting the setting and story.

There’s an obvious connecting theme between each work—that powerful blurring of lines between the real and the fantastic that is ideal for ARGs hoping to create the This Is Not A Game aesthetic.

As a member of The Black Watchmen, you’ll be tasked with solving challenging puzzles that often require real-world knowledge, sharp investigative skills, and extensive community cooperation.

This will largely be done over an online, browser-based hub that allows players to connect with one another across the globe to share clues and pool knowledge. Large-scale missions that can sometimes require thousands of players will also appear on the map, allowing for the kind of communal problem-solving that’s difficult to find anywhere else except in an ARG.

The kind of puzzle solving and experiences so far teased by the team vary wildly, and largely depend on the amount of involvement that a player has decided to dedicate themselves to. Examples so far include finding hidden codes in promotional material, simpler and more traditional puzzles done over the online hub, and that real-world mission that ended in a player being arrested by “military personnel” in Montreal.

Doyon hopes that The Black Watchmen will help bring the genre to a wider critical and popular audience through this more varied and approachable system of player involvement.

In this regard, The Black Watchmen features four core levels of engagement—red, orange, yellow, and green—that tells the developer just how much you want the game to reach out to you.

“If you’re a red that means you control the game; we’re not going to invade your reality,” says Doyon. “But the people who keep coming… these people are in for much more than the red level.”

The red level, for example, is done purely through e-mail and the online hub system. For players hoping for a much more demanding and emotional experience, the kind who “keep coming” as Doyon says, yellow and green feature intense interaction between the fantasy of the game and a player’s reality. Real-time phone calls by actors and suspicious packages arriving at your door are par for the course, while the green level even requires the signing of a medical waiver.

the line between game and reality is purposely blurred

In part this push for player exploration is achieved through a storytelling approach that emphasizes hidden clues over explicit narration, as well as a substantial level of agency from the players themselves. The storyline is highly malleable—over 50% of the content will be player-driven—and failure is always an option. “You cannot save the nurse,” promises Doyon in reference to a hypothetical character, “and she will die.” There are no restarts or quick saves in an ARG.

This player agency requires extensive flexibility on the part of the creators—they must be ready to rewrite the story on the fly depending on whether players succeed or fail in their missions. This is especially true for The Black Watchmen, considering the unconventional and potentially momentous persistent structuring of the game.

The Black Watchmen plans to have multiple seasons, depending on crowd-funding, while also making the experience accessible to anyone at any time through permanently available missions—based on the constantly evolving history of the game—to help new players catch up and learn. Both are important innovations that have yet to be implemented in almost all previous ARGs.

This persistent, approachable structure is a crucial step forward, Doyon explains. “Often if you don’t start at the beginning of the ARG you feel lost. It’s really hard for someone to jump into the middle of an ARG and have a good experience or get something really profound out of it.”

The Black Watchmen’s persistent and player-malleable structure means that the project will be constantly evolving over time into something neither player nor creator can predict. Just as the line between game and reality is purposely blurred with the This Is Not A Game aesthetic, so too is the line between author and consumer.

But let’s not get too caught up in all these juicy postmodern implications—at the end of the day, The Black Watchmen’s accessible and persistent reimagining of a still nascent but promising genre is exciting enough.