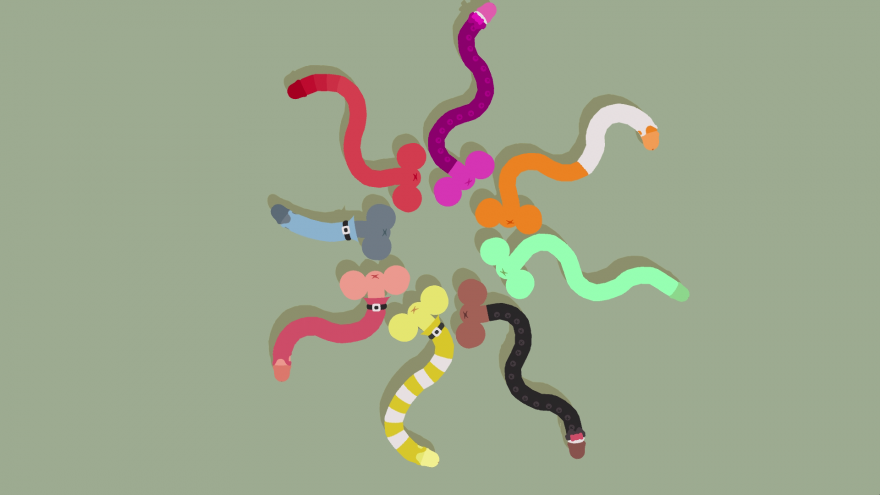 A videogame that has you and your friends play as mutant penis-butt creatures trying to penetrate one another might not sound like the most empowering female experience. But, believe me, it is. Genital Jousting began as a simple joke. At Berlin Minijam last spring, programmer Evan Greenwood (director of Free Lives, the studio behind last year’s masculine-pumped action game Broforce) set out to make a local multiplayer game with humor that was “at the expense of penises.” After teaming up with Marin Kvale (sound) and Daniel Schüler (art), they came to the understanding that watching players “chase each other around trying to have anal sex” was a multiplayer concept just “too ridiculous not to do.” (To which I say: y’all should try Tinder)

As the team explains: “A lot of the early design decisions involved drawings of penises, figuring out things like ball to shaft ratio, butthole attraction force, and the weight of balls needed to make penetration take just the right amount of challenge.” Eight hours and several buttholes later, the autonomous penis-butt monster was born.

Featuring by far the most superb ass-feel ever experienced in a game, Genital Jousting celebrates couplings with a hard sucking sound followed by a straightforward declaration of “PENETRATION.” These sounds never leave you, it all perfectly capturing what one imagines a bag of dicks might be like in actuality. “Wet and schloppy when they move, super wet and explosive upon penetrating one another,” sound designer Kvale says in explanation.

“There’s an incentive to ask the other players to get inside you,” Greenwood says, expounding on the allure of playing Genital Jousting in public spaces like arcades. And indeed you’ll often find yourself yelling at friends to “Give me your ass,” or throwing in the towel with an exasperated, “Fine, I’ll just fuck myself instead.” Indeed, the penis-butt’s ultimate form is an endless schlong circle, either a singular masturbatory effort, or with all players attached ass-to-tip, resembling the most juvenile version of an ouroboros.

The team expected some hate and disgust when they first unzipped Genital Jousting onto an unsuspecting Berlin Minijam audience. They even expected some perverse love from like-minded delinquents. But what the Genital Jousting team didn’t expect was just how much careful thought their dumb penis game would inspire.

The Minijam raised concerns about consent—particularly because the initial design framed players as opponents who must forcefully penetrate each other in order to win. The team immediately set to fixing this oversight since, as Kvale says, “intention does not equal result.” So despite their initially asinine objective for the game, they added a consent screen and fixed the points system so that opponents turned into collaborators working toward a common goal (sex). They wanted to ensure the game—no matter how silly—didn’t inadvertently render trauma the butt of the joke. So now, Genital Jousting‘s message is that, as in real life, “Sex should be fun for both parties.”

The post-game jam discussion around the game also contributed to another major change for Genital Jousting. Under artist Jarred Lunt, the style transformed from anatomically correct dicks to the more playful pastel palette. Aside from the obvious hilarity of an innocent-looking game about the act of penetration, the more abstract style also landed another kind of joke.

“Making penises abject and silly works well because masculinity is so often portrayed as powerful and successful,” Greenwood explains when I ask about the lack of female genitals in the joust. “That same joke doesn’t translate perfectly to vaginas.” What’s more, the all-male team felt it wasn’t their place to figure out the exact mechanics of a self-propelled vagina. “That’s perhaps a game for a different team.” (And my dreams.)

While playing Genital Jousting, a famous Margaret Atwood quote kept repeating in my head. “Men are afraid women will laugh at them. Women are afraid men will kill them.” It’s a statement that so perfectly crystallizes the absurd imbalance of power inherent to patriarchy that you almost want to laugh to keep from crying. You want to laugh—not because it’s funny—but because the truth of it makes your blood run cold.

Laughing at Atwood’s joke doesn’t make the reality any less horrific or factual. But for women—or, at least for me—laughing at it does make you feel a little less powerless. Women live their lives marred by the ever-present threat of male violence. Sure, I might still have to walk down the street alone at night, eyes darting in every direction, thumb hovering over the “SEND” button on a phone with 9-1-1 pre-dialed. I still have to humor my daily street harassers who believe it is their god given right to approve or disprove of my body in public spaces—silenced by the fear of my harassers retaliation if I talk back or, god forbid, laugh. The best I can hope for is feeling “relatively safe.” The worst I can hope for is to become the one out of five women in the U.S. who have been raped.

All of that is still true. Laughing at that Margaret Atwood “joke” doesn’t change any of those horrible experiences. But laughing at it does remind me that the basis for male violence is not female weakness, but rather the fragility of the male ego itself. It reminds me that, despite the inescapable oppression of patriarchy, male power actually stands on a house of cards that trembles at the mere possibility of a woman’s titter. If nothing else, when I laugh at that joke, I exercise the only recourse left to women. I laugh.

As women, we are made to be passive receivers of dicks

A funny thing happens when you actually play Genital Jousting, though: gender politics, violence, power—all of it melts away, leaving behind only the sound of a squelching dick as it finds a consenting ass to fill. I felt adamant about playing the game with an all-female cast. I don’t know why, but something about imposing women on a space exclusively for male penetration felt right. In real life, women are made to tiptoe around penises: love it—but don’t have it, respect it—don’t coddle it, fear it—and NEVER FUCKING LAUGH AT IT. Protected from scrutiny in movies while tits are paraded around Hollywood, yet also imposed on the unsuspecting in public spaces like the subway or Tinder, the dick dictates how and when it is exposed. As women, we are made to be passive receivers of dicks—almost never on our own terms.

So my girlfriends and I laughed (as evidenced by the recording below). We giggled as we tried to get a handle on the controls in the opening screen, watching as our flaccid worms flopped around in the consent box. We played rough, turning sex into a weapon no matter how many times I insisted that the game was supposed to be a “collaborative effort.” In a way, we were out for blood.

“This is the source of all that fear, worry, and oppression?” is what I thought to myself, watching my pink little member squirm across the screen in search of whatever warm butthole would have it.

Men are afraid women will laugh at them. Maybe because men know that, when stripped of the power structure that puts their pricks on a pedestal, people will realize they’re nothing more than funny-looking appendages. Women are afraid men will kill them. Maybe because the pervasiveness of male violence silences us when what we really want to do is scream or burst out laughing.

Genital Jousting is a fun game. But there’s more at play than ass and dick. Because when male egos are on the line, flaccid fun might be exactly what we need.

You can find out more about Genital Jousting on its website. You can also look forward to its release (or climax, as one might say) in April.