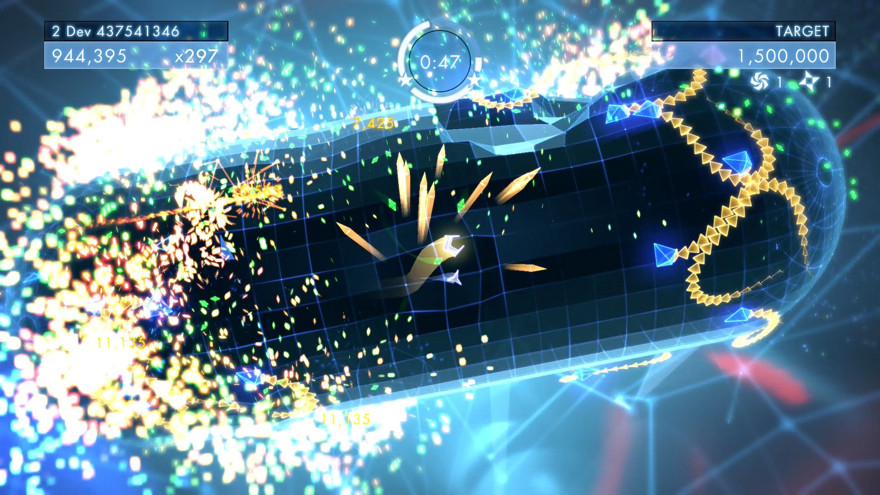 You’d be forgiven for not expecting too much out of Geometry Wars.

Considering its humble beginnings as a tossed-in minigame included with Project Gotham Racing 2, Bizarre Creations had the audacious idea of taking the entire shmup genre and boiling it down to a reduction of its barest ingredients. Gone were the hellish barrage of bullets and pixel-perfect aliens or airships (or whatever needed to be shot at), Geometry Wars gave you a grid, a ship made out of a couple lines, and some squares, triangles and circles to shoot at.

And you know what? It was basically perfect.

Devoid of fluff like “levels,” “characters,” or a “plot,” it iterated on the bare essentials, giving you two very simple tasks: navigate that grid and blow up those shapes. It hewed closer to something you’d see in an arcade 20 years earlier, but modernized; it was, true to its title, “Retro Evolved.” Online scoreboards took high scores out of the living room, turning the in-person, chest-thumping, beat-that-score experience into a global level, pitting you against literally every single person playing the game to find who was the best.

Devoid of fluff like “levels,” “characters,” or a “plot,” it iterated on the bare essentials.

Considering it was the then-best selling Xbox Live Arcade title in the early years of the 360, it’s not surprising that a sequel was released in 2008. Retro Evolved 2 built upon that simplicity with iterations on the original’s tried-and-true “shoot stuff and don’t get hit” ruleset—modes where you were unable to shoot, fought enemies in waves, gunned it against the clock, and so on. If you wanted to see what the future of games looked like in the late 00’s, Retro Evolved 2 had it—online multiplayer let you team up with buddies around the world. It helps that both games were HDTV showcases.

The interesting thing about that sequel, though, was that Bizarre Creations was able to repackage roughly the same game, albeit with miniscule changes that fine-tuned the experience even further. Soon thereafter, though, the developer folded, a few watered-down spin-offs were released, and time moved on.

Later this year, members of that studio (now under the banner of Lucid Games) will release Geometry Wars 3: Dimensions, painted with a thick glossy now-gen sheen, a host of updated online features, and the added twist that’s right there in the title: 3D maps. Boss fights (an almost heretical first for the game) placed on cube-shaped levels require players to keep tabs on enemies located on the other side of the map, while contoured arenas allow for twisting, disorientingly aimed shots on peanut-shaped maps.

What seem like relatively simple updates leads to some twists and turns on a game that I thought I understood fairly well. In lieu of the handful of game modes (which are still available for play), the player now progresses through levels of increasing difficulty, each with itsown enemy patterns, rulesets and map shapes.

But it begs the question: once you’ve moved past simplistic perfection, how elastic is a game until add-ons, features, and polish start to overshadow what made it so special in the first place? Watching those swirling, twisting maps and explosions of color before me, I couldn’t help but thinking maybe this is *too* much for one person to process, and maybe that’s the point. Where Retro Evolved achieved an arcade purity, and Retro Evolved 2 repackaged that tastefully, it seems like Dimensions’ goal is to push the current systems toward maximalist effects. Like its predecessors, it again recalls the arcade days of decades past, but this time it’s because of all the flashing buzzers and strobing lights designed to grab our quarters.