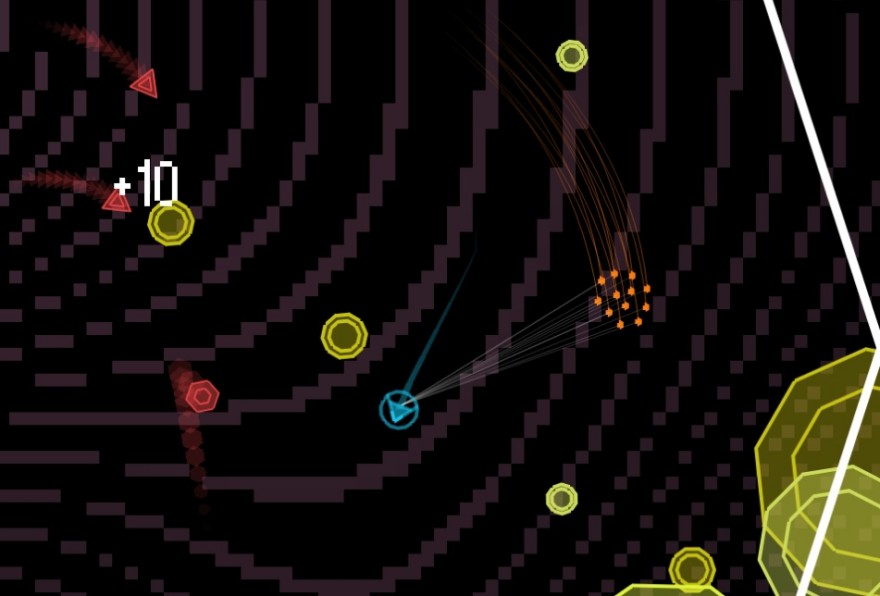 Shooting is too easy. I’d file it away as being slightly more complex than changing a channel on the television with a remote control. Just aim, pull the trigger, and watch the fruits of your minimal labor play out in front of you, more or less.

That may be why Andy Wallace decided to create Particle Mace—an arena shooter without the shooting.

Your nimble ship drags several tendons with it; particles flailing at the ends. These particles are dangerous to everything (except you) when accelerating; able to smash asteroids down to dust, and obliterating foes with screenshaking thuds that vibrate through your gamepad. Your means of defence and offense are one of the same: movement.

Your thumbs ride the analog sticks as if a space cowboy with a mean lasso technique.

Being able to turn on a dime, evading the spinning stars and stabbing triangles that are after you should be trivial. The skill is in taking the necessary risks for survival and chasing high scores: hurling your dangerous cargo around in sweeping circular motion, or flinging them back and forth, and not accidentally crashing your ship in the process. Your thumbs ride the analog sticks as if a space cowboy with a mean lasso technique.

The mode proves that the unpredictability of your physics-based passenger can be difficult to manage, which translates into entertaining play. But it lacks the variation and purpose of the 108 missions on offer.

I’m willing to bet that Particle Mace‘s missions could accidentally be read as formative notes for side quests in one of Rockstar’s Grand Theft Autos. One line briefs demand you to survive for 40 seconds while an invincible triangle knight chases after you—the trick is in embarrassing its turning circle. Smash 20 asteroids in 10 seconds, get a sextuplet multikill, race to all the spots without destroying anything along the way. It’s a testing mix of selective destruction, racing, and evasion.

Each mission sees the arena tailored in shape, size, or content according to your goal: moving boundaries, being filled to the brim with enemies or asteroids, a red background to camouflage foes. As you are issued three missions at a time it’s possible that these tweaks to the area conflict with each other. Try having extra-long “goofy” tendons in an asteroid-filled arena that shrinks and pulses. That was a ride I’ll never forget.

With the risk-reward weapon design and pick ‘n’ mix mission selection, Particle Mace finds unexpected excitement in the spatially impinging design of the arena shooter. Yet, it doesn’t contain a single pew-pew.

You can get instant access to Particle Mace’s alpha version by purchasing it here.