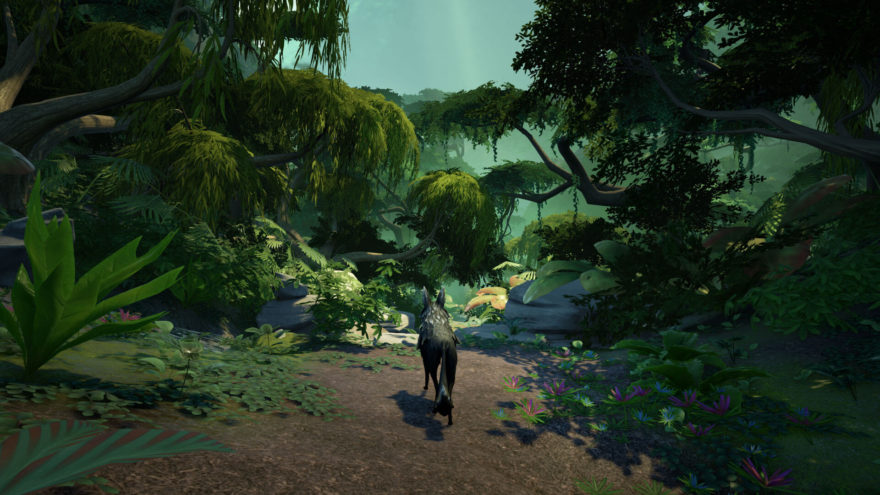 A gentle breeze rustles the tall grass that surrounds you, causing the blades to sway back and forth lazily to the soft rhythm of the wind. Up ahead lies a dirt path, leading to an unknown destination whose name was lost to time long ago. You’re curled up on a patch of soil near a bank of water, taking a short break from exploring the environment.

The ripples created by the wind roll slowly toward you, splashing at your paws. You catch a glimpse of your resting form in the reflection—distorted, but beautiful. Your coat is thick and long, and your ears are sharp and attentive. Your legs are agile and strong, able to carry the weight of the discoveries during your travels. You rouse yourself from the ground and stretch, extending your neck upward to release a howl. A flash of red light drifts toward you, circling around you excitedly. You wag your tail and the two of you set off.

Lost Ember is an exploration game that’ll task you with finding out what happened to the old Inrashi culture that dwelled in the lands you inhabit before you. You’ll do this with the help of your disembodied companion, who is all that remains of the past. The old soul guides you in the adventuring, able to show memories of its past that allows you to experience its forgotten journey.

Who’s a good boy? In Lost Ember, YOU are

Being created by Mooneye Studios, a team of five designers based in Germany, Lost Ember now has a Kickstarter campaign. The hope is to crowd fund enough money to ensure that the studio’s vision can come to fruition. If funded, stretch goals include additional animations, additional languages, and more animals to “possess.” According to the page, 55 percent of the money will be used to finish development, while the rest go to taxes, Kickstarter fees, and most importantly, backer rewards. Depending on what tier you pledge, you have the opportunity to receive a physical art book, vinyl soundtrack … or a handmade statue of the good boy himself, cast in resin.

Who’s a good boy? In Lost Ember YOU are. You play as a  wolf, and explore the surrounding environment as the magnificent four-legged creature for the majority of the game. But you’re also able to switch perspectives and posses other animals in order to gain greater mobility (like when you’re a bird) or reach places you were otherwise unable to (like a digging underground as a mole). According to the game’s creator, other creatures include “parrots, fish, moles, eagles, capybaras, mountain goats, buffalos …” but no other good boys. That’s OK, because there can only be one alpha. And it’s you.

Being able to play as a wolf with a companion sounds incredibly appealing—at least to me, lover of all good boys—especially as “the wolf and his companion form a deep relationship of friendship and trust.” Even in a setting where civilization has crumbled, it’s comforting to know that the bond between canine and disembodied floating red light/spirit goes untarnished.

The plan is to have Lost Ember released on Xbox One, PC, and PS4. Click here to take a look at the Kickstarter page for more information. Do it for the dog. 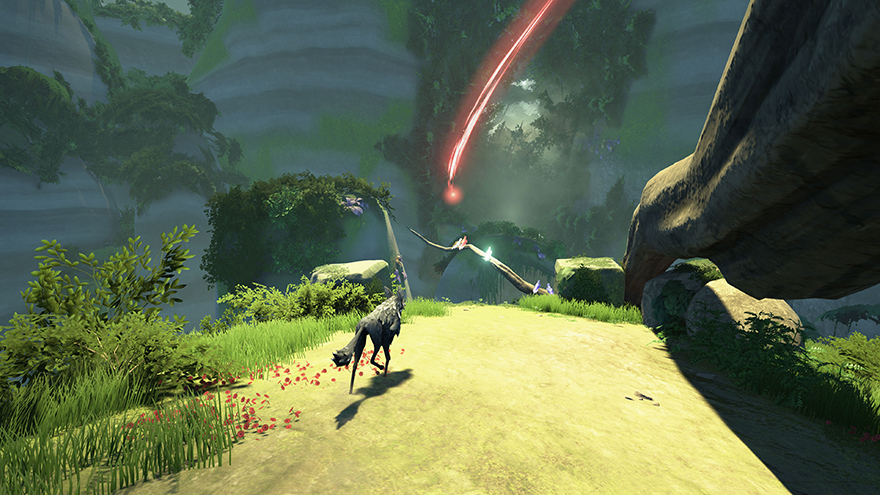