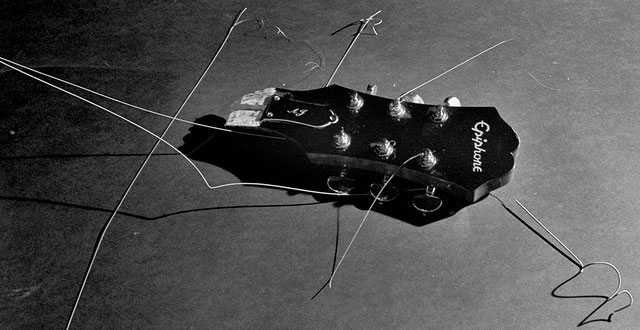 Yesterday, Activision turned its virtual amps down from 11 to zero by halting the Guitar Hero franchise. Citing “continued declines in the music genre,” the company canceled an as-yet-unannounced seventh Guitar Hero game, along with its lukewarm spin-off DJ Hero, and laid off hundreds who work on those series.

Eurogamer got the scoop, along with a statement from Activision that suggested you’ll still see Guitar Hero games and plastic instruments on store shelves—assumedly as “greatest hits” value bundles, or the videogame equivalent of a Starbucks compilation CD.

Far as I’m concerned, that’s the best idea Guitar Hero has had in years.

The Guitar Hero series drove itself into the ground with repetition. The genre’s last big change—drums and microphones—came more than three years ago. To its credit, Rock Band recently upped the ante with additions like keyboards and a 102-button “pro” guitar controller (and Harmonix hinted to me about crazy ideas for future iterations). Conversely, until its death, Guitar Hero hewed to the standard—colored bubbles that you tap along to on a small, five-button guitar controller.

If we’re playing the same game every year, why be ashamed? In 2008, Mario Kart saw a best-of version for the Nintendo Wii, packed with every classic racetrack and character, yet little innovation. Three years later, Mario Kart Wii continues to top sales charts at its original $50 price tag. Its weapon, control, and power-sliding mechanics have been locked in place for nearly a decade, and its continued freshness comes from our exploiting its system as players, whether solo or in loud multiplayer matches. In the battle-racing genre, we’ve stopped clamoring for innovation.

The same cannot be said about music videogames. The genre is still so young, and Activision has acted like Decca Records, rejecting gaming’s Beatles equivalent because “guitar groups are on the way out.” But if Activision has no interest in innovating or experimenting with music games, it’s not being very rock ‘n’ roll. A company has all the right in the world to clear over $4 billion in revenue annually and maximize its profits, but that’s the point where the spike-covered leather jackets and beaten-up Converse sneakers need to come off. I, for one, look forward to the series’ oncoming, refreshing honesty: comfort-food value packs of Guitar Hero at my neighborhood Costco, right next to the Justin Bieber CDs.