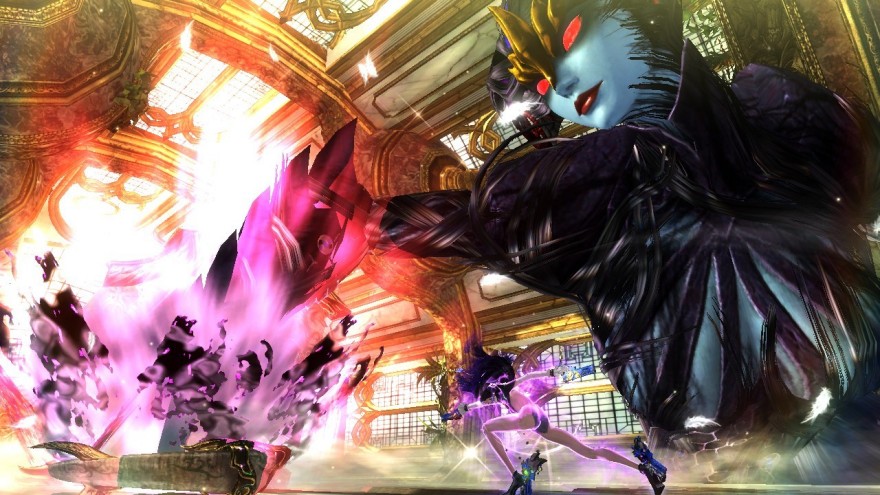 Howlingly blatant and obvious on many levels—some might ask, How many levels do you really think there are?—it grows marvelously slippery and paradoxical at its depths. – They Live, Jonathan Lethem

Art’s greatest maximalists—Varese, Pynchon, Bay—make no apologies for their gluttony. It is, after all, just another aesthetic, a fatter brush with which to lay the paint. All things exist on a continuum, and somewhere way-the-fuck-out-there lies Platinum Games’ Bayonetta 2.

Bayonetta was a singular piece of work, all bastardized religious hohokum (angels! demons! …witches?) and camp sexuality laid overtop of the most perfectly meaty hack-and-slash combat to ever grace a videogame.

The most perfectly meaty combat to ever grace a videogame.

Necessarily, its successor Bayonetta 2 is slightly less singular, but compensates with unrelenting, ever-increasing preposterousness—and this following a game whose climax saw you punching God into the sun. The religious stew this time folds in faux-Norse trappings—a crucial location is called, delightfully, “Fimbulventr,” after the apocalyptic winter of myth—to the Inferno-soaked base, and the camp factor has been increased rather significantly with a foul-mouthed child sidekick named Loki. Even the colors are amped up from the first game, 120 tube-fed violet, indigo, hot-pink watts.

The first twenty minutes toss you right into a portentous expository voiceover and a bunch of decontextualized fights like some Dadaist version of its predecessor. Squelching organs and big 80s-verb snares pound out possessed gospel grooves on the soundtrack. Then—after we are reintroduced to our cast via a Christmas shopping sequence that plays like a network sitcom—you reenact King Kong as a titanic beatdown, the beauty beating the shit out of the beast as he scampers up the Empire State Building.

She’s teasing you, in short, and it’s probably going to make you uncomfortable.

Bayonetta games exist outside the combo grind typical for this genre: as befits our heroine’s elongated elegance, destroying enemy after enemy requires little more than deft timing. Dodging a foe’s attack triggers “Witch Time,” slowing them to a crawl while you filt about beating the tar out of them like a Dragonball Z character.

And here’s the series’ dirty secret: despite all that aesthetic maximalism, they’re minimal affairs at heart. There is one button each allotted for punching and kicking. Like Glass’s “Music in Twelve Parts,” the repetition—here of dodge-attack-dodge-attack—builds into glittering spires of balance. You can equip weapons, but no specific weapon is ever required for any particular enemy. The game wants you to revel in the simple pleasure of its systems, to push yourself to exploit them to their fullest. To ascend to advanced Bayonetta play requires dodge offsetting and countering—both techniques that enable long, fluent combinations that cascade into each other like the glorious thwapping rototoms and cymbal crashes of a Neil Peart drum fill.

And like drumming—another viscerally rewarding pursuit—as long as you hit that Witch Time “downbeat,” you’re free to do whatever the fuck you like in between. Strap swords to your heels? Sure. Chainsaws? Obviously. What about wielding a living longbow named “Kafka,” made from a guy who turned into an insect?

I should hope so.

She gets naked when she fights, is what I’m trying to say. It’s not a concept that gets explained ever, which is perfectly fine. The last thing Bayonetta 2 needs is more lumbering exposition. But it is a concept that has proven particularly sticky in the past.

Is this game’s blatant sexuality sexist? Is it empowering? Objectifying? Refreshing? Gross?

As fundamental to the game as pressing buttons.

I can certainly tell you that it is; it exists, it is as fundamental to the game as pressing buttons. No pun intended.

In film critic Kier-La Janisse’s House of Psychotic Women, an “autobiographical topography” of neurotic women in horror, she sets out to combat both her own tendency to see “positive female representation in everything, no matter how ostensibly reprehensible the film’s politics,” but also the more widespread impulse to “denounc[e] the genre altogether” as misogynist, populist gruel.

And through it all she carries an assertion filtered down from horror critics like Carol Clover: that the surface sleaze of exploitation and horror film is exactly what allows them to function so insidiously on their audiences and, in the end, offer the most unfiltered vision of a society’s id.

We dip our toes into the realm of academic theory here only to back up another version of that assertion: that the sexuality of a work like Bayonetta 2 is part-and-parcel of its creative statement, and deserves the same close reading as its massively dope mechanics, not dismissal.

I’m burning through continues like they’re nothing. “Character action” games like Bayonetta like to pit you against a foe similar in strength to your own in an intensely sharp test of skill: rival fights, they’re called.

And any rival who can keep up with Bayonetta’s dashes, dodges, summons, and arcanely charged hammer-blows needs equally balletic elegance. The Lumen Sage (Platinum Games are Bungie-level masters of fantasy gibberish) is well up to the task, his lithe physicality matching her step-for-step.

It’s me who’s stumbling. These one-on-ones strip away (most) of the game’s sensory overload, leaving only a sight that should be familiar to any fan of martial-arts cinema: two combatants of inestimable skill clashing with frightening speed.

But I can’t grok the rhythm of this fight. I’m hitting the buttons, sure, but something’s being lost in translation between my mind and the Wii U’s chubby gamepad. It’s suddenly like trying to play “Dopesmoker” on a practice amp. What should be massive and roiling is halting and labored.

I move in close; he rebuffs me with a magic sigil. I keep him at a distance and he—well, he can teleport. He dives into every mistimed dodge face-first. The fight isn’t mine, it’s his.

It’s tough to transpose Mulvey’s theories to videogames, mostly because I’ve never seen a videogame cutscene that approximates the level of visual intelligence of even the most remedial filmmakers. But we know quite well that videogames have been mistakenly targeted at young men for a long time, and thus when a barebones dialogue scene is framed in a medium shot of the female character’s lovingly sculpted buttcheeks it comes as no surprise.

Perhaps for the first time, a female character who consents to her sexualization.

But that sort of weird voyeuristic bullshit is not what Bayonetta 2 offers. No, Bayonetta herself is in control of the camera. Like Orson Welles, she both acts and directs.

The camera contorts itself to follow Bayonetta’s acrobatic lead; she winks at it, blows it kisses. She toys with it. She dominates; it submits. Indeed, the game is dominated by women: men appear as buffoons, massive pallid dogma-spewing seraphim, or annoying sidekicks.

Perhaps for the first time, we have a female character who consents to, and sketches the boundaries of, her sexualization.

The Lumen Sage is still hand-delivering a king-size ass-whupping right to my front step. I’ve exhausted all my health items, reduced to greeting each new game over screen with a thousand-yard stare.

Crucially, Bayonetta’s infamous stripping-down super attacks aren’t sexualized at all. She strikes a pose, skin showing for moments as she screams some esoteric gibberish, and her hair flies off into the form of some hideous demon, the camera following. Sorry, boys, she might say, blowing a kiss and stamping a be-chainsawed heel to the ground.

Putting herself on display to utterly fucking wreck fools tracks with the usual combat flow, which is that vulnerability equals strength: get dangerously close to enemies to deal the most damage.

When Bayonetta is most superficially vulnerable during a Climax attack (as they’re called, naturally) she’s invincible, stripped naked with the furious hordes of Hell rampaging behind her.

Suddenly, on my fifth-odd continue (the game stops counting after five, as if embarassed to show you the true face of your failure), it snaps into place. The Sage telegraphs his attacks like he’s trying to throw the fight. I dodge, trigger Witch Time, and start trouncing him. I’m flying here; I’m blowing through strings of combos like Donnie-fucking-Yen.

I burn through his health meters in no time and the fight shifts; now his massive angelic avatar is shooting missiles at my massive demonic avatar. My sick death-metal demon, high off my success and my frantic mashing of the X button, knocks the missiles away, deflects lasers triumphantly. I’ve mastered the Lumen Sage like a piece of sheet music; every rest, every phrase perfectly executed via rat-a-tat button presses.

Did you not see what I just did, game?

And then the stage ends. The results screen pops up: I get a stone medal, the lowest possible award. It’s in the likeness of obnoxious, bumbling, Joe-Pesci-in-JFK caricature Enzo. It basically feels like a slap in the face. Did you not see what I just did, game?

Would you give a stone goddamn medal to Donnie Yen?

The rub with Bayonetta’s design is that it feels authentically fetishistic, in that I have absolutely no reaction to it down low. The whole fake-accent, librarian-glasses, giraffe-body thing feels like the creation of someone who really, really knows what they like. It’s weirdly specific, arcing toward a distinct abstraction of sexuality that has no relation to the vanilla, vaguely ashamed T&A games like to trade in.

It’s performance, pure camp. The notion of Bayonetta-as-drag queen has been floated before, and whether you go to that well or not, Bayonetta’s femininity is—has to be—as redlined as everything else in the game. And it’s funny, too, genuinely silly and dumb in the vein of kindred anime Kill la Kill. That goes a long way toward selling this stuff.

They all leverage extremity and taboo into the substance of their art. It is how they tell their stories, convey their messages, whatever they may be.

Jonathan Lethem’s deep-dive on John Carpenter’s 1988 They Live unfolds the titular cult icon’s multiple strata of meaning. As they’re teased apart, its various themes often appear contradictory and messy. Yet Lethem finds his most rewarding veins of material in those spaces where things don’t quite line up: “Those gaps are usually also related to its richest provocations, its vibrant ambiguities; it wouldn’t be wrong to say its gaps are also zones of pregnancy, the places where the film is hatching what I think is most worth wondering over.”

Bayonetta 2 is an act of worship.

I’ll stop short of saying Bayonetta 2 advances some grand theory of feminist empowerment, but intent is the least interesting part of art, and the aesthetic this game traffics in is rich with symbolism and subtext. The current gaming climate is rife with poisonous attitudes toward women; Bayonetta 2 is an act of worship. As you tear through legions of stuffy monomaniacal patriarchs—not unlike Tina Fey’s “grey-faced men”—you are enacting a narrative on a richer level than the game’s preposterous surface story. This is femininity beyond comprehension; there’s fear in there, male anxiety about the ostensibly nuclear power of female sexuality, but also awe. This is a shrine to our peculiar heroine. Bayonetta 2 erects some of the most solid fighting mechanics and phantasmagorically gonzo visuals in gaming to date—certainly, something as compulsive and massive as this boosts the Wii U to the front of the pack—and through its formal choices communicates a singular, unfiltered vision of sexualization.