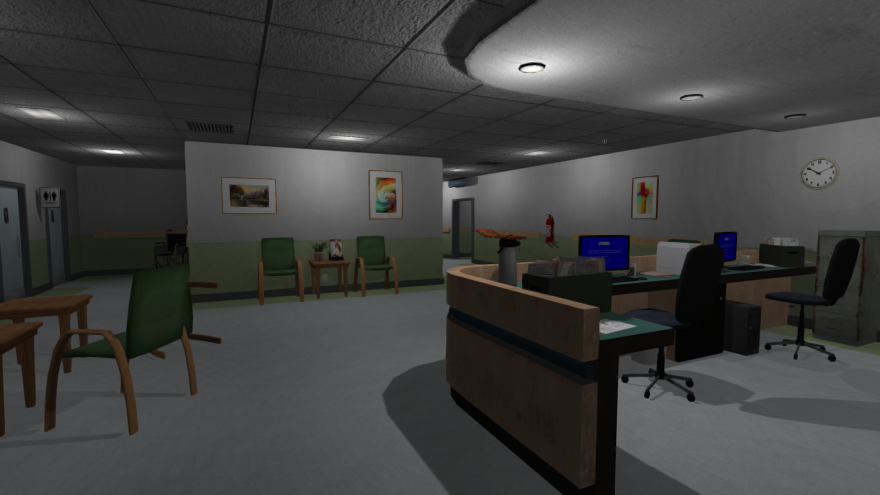 Someone, perhaps multiple people, is hiding in that screenshot above. Can you see them? No, you can’t. What you can see are everyday objects: a desk chair, a framed painting, a fire extinguisher, a wall clock. So where are they?

The hider(s) could be any of these mundane objects. They are a soul, able to possess any material it wishes, and they’re trying to keep perfectly still, holding their breath in front of their microphone as you swoop past. You might not recognize them, but there are a lot of tense bodies in that room, trust me.

The problem with hide-and-seek is that there are only so many hiding spots in a single location. As an activity, it’s great for exploring the unexpected nooks of a designated area. You probably learned a lot about the contours and diameters of the house you grew up in by turning it into a play area for the purposes of hide-and-seek. But, after a couple of years of playing it with my sister, again and again in the same semi-detached home, I found that all originality had been exhausted. That’s when hide-and-seek loses its appeal.

hiders are able to become any physical object

This is easily resolved if you’re able to escape the bounds of your house. Children can’t, and so we had to find other modes of play to beat back the boredom. Kids these days have another option. It’s an online multiplayer take on hide-and-seek called Prop Hunt.

I first heard of Prop Hunt a couple of years ago due to what seemed to be every single prominent gaming YouTuber playing it and posting videos of the hysterical results. Prop Hunt originated as a mod for Team Fortress 2, but it really took off when it was tailored as a game mode for Garry’s Mod—a standalone sandbox physics game with a focus on manipulating character models, items, and props.

There are a few changes to the original hide-and-seek concept that elevates Prop Hunt beyond anything the traditional game could ever be. Firstly, the hiders are able to become any physical object—small or large—inside of the pre-made levels. The hunter’s job is, obviously, to seek out the hiders. What hunters learn distinguishes a hider from an inanimate object is, firstly, its position—a telltale sign of a hider is if there are more objects than usual in a certain spot. Secondly, a hider cannot be picked up by the hunter unlike every other item, which is the most common method of exposing them.

But it is not enough for hunters to find the hiders. They must also incapacitate them. And so, when spotted, the hiders will run away in hurried screams to find another spot to hide. They are helped along by being able to move quicker than the hunters. In this situation, hunters will give chase, using bullets, grenades, and a crowbar to reduce the health of the hiders to zero. How much damage the hider can take depends on what prop they are; bigger objects are easier to hit but can take more damage than smaller ones.

the same immaculate suspense as a Hitchcock film.

You may ask why the hunters don’t shoot every object they see, as that would seem an effective tactic (you crafty scoundrels), but they can’t. Hunters reduce their own life meters if they damage any prop that isn’t a hider. This genius twist ensures that the hunters are measured in their approach, meticulously examining every inch, and has them make sure of their target before hitting the trigger.

With those rules in place, Prop Hunt quickly gave way to memorable moments of tension between the hunters and the hunted. It’s especially great when being spectated, hence its explosion on YouTube, as you can see each of the hiders hoping that the hunter doesn’t spot them, and you can also see the hunter as they slowly stalk the cluttered spaces. Having both channels of information gives it the same immaculate suspense as a Hitchcock film.

Unsurprisingly, considering the popularity of Prop Hunt, it is now being reconfigured into its own standalone title by a pair of fans. SoulHunt is, essentially, the same idea as Prop Hunt, albeit with a few additions to hopefully breed further tension.

Hiders are now souls that can possess any object. However, they have mana that puts limits on their capabilities, including how quickly they can possess other objects. Most notable of the additions in SoulHunt is giving both sides of the hunt new skills. Hiders have the ability to “ragdoll” their possessed item, meaning that it goes limp and, if done properly, blends in with the environment better. One of the hunter skills is hearing the heartbeats of the hiders. And, of course, there’s also a skill that allows hiders to mute their heartbeats.

At the moment, SoulHunt is in its early alpha phase, and it’ll probably be a while before it’s finished. Even so, with it being built on such a strong framework it’s worth having a go, especially if you can convince some friends to hop in with you. In my mind, this is the best way to play hide-and-seek, that is, until virtual reality steps up and takes over.