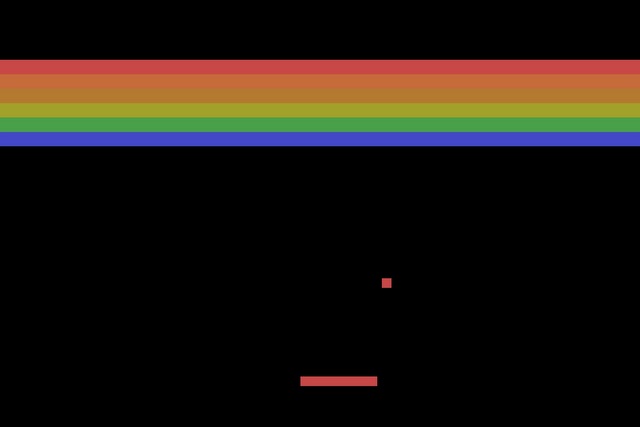 Thirty years ago, David Sudnow wrote a book called Pilgrim in the Microworld. For 227 pages, he describes, dissects, and unravels an obsession with the Atari 2600 version of Breakout. This is no DIY chapbook by a greasy teen; Pilgrim was published by Warner Books, and years prior Sudnow won a Guggenheim Fellowship, one of the most presitigous honors available.

So what was a genius doing writing about a videogame whose entire premise is to make static rectangles disappear off a screen? We’ll never know, as Sudnow himself passed away in 2007. But the consequence of his efforts is both a fascinating study of a mind at work and a bizarre time capsule, a glimpse into gaming’s nascent rise and a reminder of all we take for granted today.

He seems to be talking to himself, almost as if he dictated notes while struggling with the Atari 2600 joystick.

I stumbled upon Pilgrim in the library of the college where I teach. As a communication school, its stacks are heavy with tomes on music, film, journalism, feminism, other -isms. The games-focused section reaches across two 3-foot shelves, maybe a couple dozen books. Most are collected academic essays, the compendium’s titles—“Playing with videogames,” “Studying videogames,” “Understanding video games”—squeezed of any life or verve, just like their subjects.

Then I pick up this strange book with a beguiling cover, of an eyeball floating in some vector cyberverse sketched from the future-dreams of kids the night after seeing TRON. A gradient of red-to-orange pixels outlines the ambitious title. Underneath, an explanation: “Eye, mind, and the essence of video skill.” So this is a How-To book? Perhaps it served as public response to another unlikely author’s arcade obsession,  Martin Amis’ now-infamous Invasion of the Space Invaders from 1982. Sudnow published his in 1983: Not exactly blazing trails, this pilgrim. But I guess the real ones hadn’t, either. 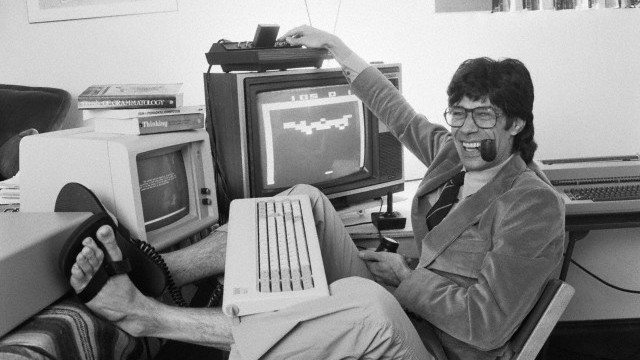 But where Amis’ book attempts to serve the gaming neophyte with actual advice (“Do I take risks in order to gobble up the fruit symbol in the middle of the screen? I do not, and neither should you.”), Sudnow’s is the journal of a man trapped at sea, writing for an audience of one.  He seems to be talking to himself, almost as if he dictated notes while struggling with the Atari 2600 joystick, then asking his assistant to transcribe them. Sudnow was a jazz pianist, but also a sociology professor: The game he was playing, Breakout, his obsession, was an undiscovered people, a song he’d yet to master. Oh, how he tried:

There’s barely anything to interfere with a long end-to-end volley. The ball lofts to the far wall from a slight angle off the paddle and reflects off a side wall back down. Hit it back. It retraces exactly the same trajectory. Fingers tautly poised on the edge of a neurological breakdown, I go through ten or fifteen slowly drawn triangular tracings over the same path without moving. And one of those bricks is right nearby,

oooooooh missing by a fraction. I’d love to redirect the shot just a touch right now, but that feels unbearably risky and I’m too scared to move. I want that closure, ache for it, know I’d literally hit that reset switch if I missed now. Come on, go all the way, undress that screen after two weeks of dating.

Much of the book is a stream-of-consciousness mix of anxiety and mathematics. Beach reading, it ain’t. Breakout is a simple game: an archaic Tennis for One, a single step evolution above PONG, which may cause some to question our host’s emotional stability. Nor does the book illuminate some hidden crevice of a known thinker’s past, the way Amis’ does. But the form itself reveals a type of attention and nuance hard to muster in our present era. 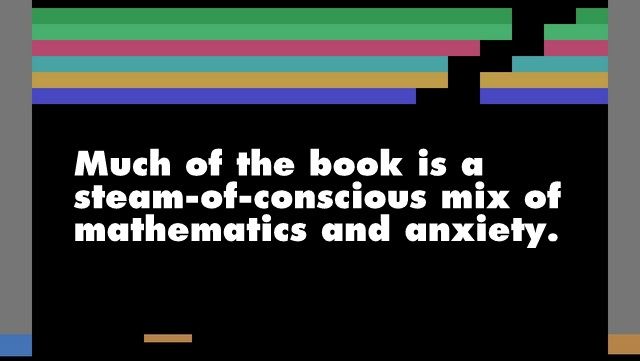 Our contemporary always-on discourse is a consistent release valve, each tweet and vine a tiny burst of opinion / knowledge / revelation. Thirty years ago, as Sudnow hooked up this unassuming box to his TV, the simple choice an antecedent to hours and hours of fiddling with a knob, he was alone in his house. But that’s not quite right. He was there with the game. Then, months of considered play lead to a book read by thousands. Now, a moment’s thought blasts out to a potential audience of millions. I can’t help but think Sudnow wasn’t the pilgrim, but the native, whose ways had yet to be trampled by our unceremonious appetite for frontiers.

Is this not a self-portrait of our 21st century selves?

Where the book succeeds is in making plain those rapturous insights only possible while experiencing something new. In 2013, hitting a button and watching a screen flicker with life is expected, old-hat. In 1983, like television and radio and electricity before, videogames in the living room still felt like a miracle of sorts, the result of voodoo incantation. Grappling with this new reality serves the same purpose as an anthropologist’s travels: We visit elsewhere only to see our home from a changed perspective.

To Sudnow’s ears, the simple blip-tones of Breakout cause an obvious but startling realization: “If every time you bounced a basketball it made different sounds, you’d dribble more than necessary.” While lost to the throes of obsession we think long-buried thoughts: “We count and count and count until we invent a numbering system, based on ten digits, and some years later, having long since lost sight of how that system originally related to our anatomy’s way of seizing hold of the world, we use ten digits to type instructions directing electricity to outline our body’s mathematics back at itself.” These same hands that tap buttons to jump have coded the controllable: “A self-actuating, glistening little creature under glass that we now and then poke at through wires.” Is this not a self-portrait of our 21st century selves?

“Our new electric brain sets turned up to the maximum and the only quiet left to imagination.”

The author first discovered games by retrieving his son at a local arcade. He’s reminded of composer John Cage’s experiment in sensory deprivation, confining himself to a noise-free room, during which he heard two sounds: the low thrum of circulating blood and a high whine of his nervous system. Standing in the arcade, Sudnow describes his present moment, and ours: “Now a reverse milieu, our new electric brain sets turned up to the maximum and the only quiet left to imagination.”

Decades in the past, Sudnow played a videogame that eradicated his present and showed him the future. His obsession, like most, faded; in the final pages he leaves the barracks of his room and walks the streets of his childhood in Manhattan, igniting “a remembrance rich with images.” Today we all live in the microworld. We leave our house and still reside there. Listen closely.