The Cold War is cool. It has atmosphere. A vibe. It conjures clouds of cigarette smoke, spies being swapped on bridges, people listening in on you from upstairs, watching you from the shadows. It has great stakes too—amazing, existential stakes. A lot of ‘80s nostalgia is tinged with a rosy glance at the struggle against “The Evil Empire,” if it doesn’t outright celebrate it. For people lucky enough to not have been caught up in the proxy conflicts, today the Cold War feels like a nostalgic emblem of a simpler, better time; a world with an actual wall between right and wrong. This is an apolitical fondness, true for both millennial hipsters and the Ted Cruz contingent of the Republican Party.

The recent Spielberg/Coen Brothers’ movie Bridge Of Spies taps into this nostalgic kitsch, mining the Cold War context to create a character study of two unrealistically principled people struggling with absurd circumstances—the lawyer James Donovan, portrayed by Tom Hanks, and the famous Russian spy, Rudolph Abel, played by Mark Rylance. Throughout the courtroom drama, the two men each stand for something bigger than themselves: for the dignity of duty and devotion to country. It’s a quiet heroism enabled by the Cold War backdrop. Watching the film is a seductive experience; the Cold War becomes good, old-fashioned popcorn entertainment. Which begs the question, at least for some viewers: how might we play this thing?

Just as the Cold War is a rich setting for film, so too should it be ideal for games. Yet outside of hardcore war-gaming, the menu of Cold War videogames is surprisingly limited. Partially this is a consequence of definition—what makes a war game a “Cold War game”? Well, it ought to contain at least one of the hallmark elements of what made the Cold War what we remember it as today—that is, 1) a threat of total existential annihilation, 2) geopolitical machinations, and 3) subterfuge. Plus, it must be set in a world that’s 4) recognizably like our own. This definition would exclude the Metal Gear series from discussion as too sci-fi, too Kojima—more ‘80s action movie run amok than Cold War in miniature.

In terms of the first criteria, videogames certainly have the nuclear apocalypse covered. On the one extreme, we have Introversion Software’s Defcon, from 2006: a stripped-down strategy game represented in vector graphics laid across a map of the world set up in the classic NATO configuration of Cold War alliances. The objective of Defcon is to kill as much of your opponent’s population as possible with nuclear weapons, while also hopefully limiting the deaths of your own population. The largest number of megadeaths (1 million deaths) wins. The game is a product of the same grim, depersonalized calculus that led to nuclear proliferation IRL that, at its height, would have been able to annihilate the world dozens of times over: in 1985, America had 21,392 nuclear weapons while Russia had 39,197. Who would’ve “won” in an exchange between the two? Whoever posted more megadeaths? Gigadeaths? Would the “winner” be the commander sitting in his bunker of CRT monitors displaying little vector representations of the world burning? The cold, unflinching vectors and doom-laden electronic bloops of the Defcon soundtrack sell the experience further. It’s not exactly laugh-out-loud fun, but it’s a game that makes you think.

It’s not exactly laugh-out-loud fun, but it’s a game that makes you think.

On the other end of the spectrum is ICBM from REPVBLIC. This small downloadable game, released just this past summer, is the single most accurate representation of the thermonuclear aspect of the Cold War that we know about. In the game, you play as an American missilier, assigned to a nuclear silo and given the keys to launch your nuclear-tipped intercontinental ballistic missiles (ICBMs). You are tasked with nothing short of defending the free world from annihilation, across five chapters and five difficulty levels. Once you work your way through the mission briefing, you are released to your missile control console to await the launch signal. You wait. And wait … and wait … Spoiler alert: the signal never comes. After five chapters of waiting, you are rewarded with a Ronald Reagan campaign video about keeping America prosperous. The experience captures the fear, boredom and propaganda of the time in terms so realistic it borders on being a joke.

So that’s the nuclear holocaust covered, from both ends. How about subterfuge? While there are any number of terrific spy games out there—“Invisible Inc.” stands out as a particular delight, though it is far too sci-fi to qualify as a “Cold War” game —few nail the daily Cold War experience of subterfuge as well as 2013’s Papers Please does. As an immigration officer in a Soviet-style nation, it is your job to find discrepancies in immigration paperwork and bust spies, would-be illegal refugees, terrorists, and other do-wronglies lined up in your queue. Forged paperwork, tense eyeballs from border patrol guards—these are the things of the actual everyday clandestine experience of the Cold War, especially in the borderlands between East and West Germany. They also are the stuff of the classic high-tension scenes of Cold War canon—in Bridge of Spies, our hero, James Donovan, has no small number of encounters with straight-jawed communist border guards looking askance at passports. 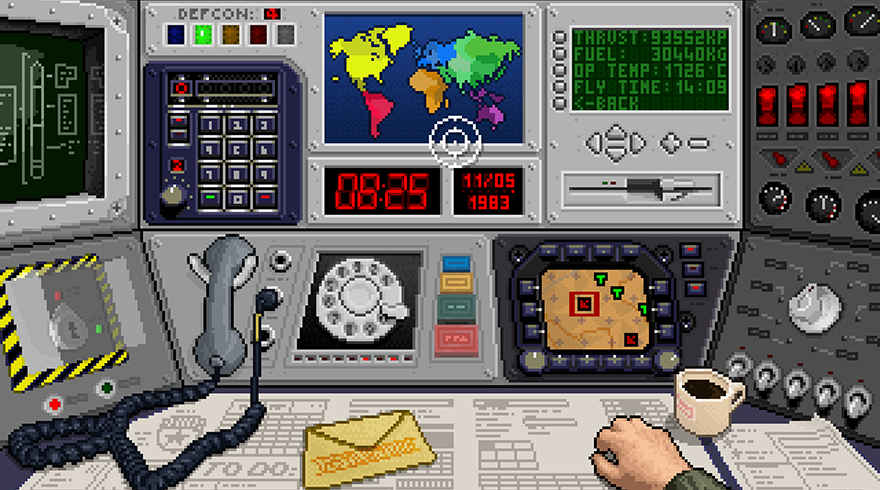 Nuclear annihilation, check. Subterfuge, check. But while the above games can be illuminating, the real thrill of the Cold War can only be captured on the strategic, geopolitical level. When we are imagining Cold War popcorn entertainment in game form, what we’re striving for is the ultimate power fantasy—to be the general in the Pentagon, lording over world affairs, turning corners of the globe “hot” in our favor, while creating enough plausible deniability to say that it has nothing to do directly with our great and good nation versus that most evil of empires.

That’s why there is no game that captures the Cold War in one palatable package better than the Civilization IV mod, Legends of Revolution (2009) by phungus420 and achilleszero. This mod transforms the Civ IV experience into an intricate game of fomenting foreign rebellions, fighting proxy wars, and dealing with the civil strife on your own turf sparked by the covert actions of your enemy a continent away. It achieves this through a number of smart tweaks to the base Civ IV game, including an expansion of the espionage system, an upgrade to the AI’s strategic planning, and the spreading of influence across individual tiles through war or culture.

I let America do the hard work.

But the key addition is the “Revolution” mechanic—your cities can become disenchanted with your rule, or turned against you, even breaking off to form their own civilization, sparking a civil war. This single addition transforms the game by expanding the offensive options at your disposal. Now you can target your enemy’s borderlands, or distant outposts, or otherwise disaffected cities with subterfuge or influence to maneuver your enemy’s evil empire into splitting in two—a la Korea or Vietnam—creating an opportunity for you to attack, or to convince someone else to invade. Soon after the “writing” tech is discovered, a Cold War rivalry naturally starts to settle over every match as these finer tools enter the mix, and distrust blooms between every player. More than any game I’ve played, this taps into the grand realpolitik strategizing behind the Cold War and puts you in the God seat.

In my most recent game, I played as the Byzantines, sharing the continent with the Americans and the Mongolians. While my Byzantine peeps soon found solidarity with the shared values of the Americans, neither of us really got along with the bellicose Mongols, who ran an aggressively expansionist Buddhist theocracy, creating a constant state of war in the southern lands.

Once I had my spy game up and running, with agents posted in every city on the continent,  a much clearer picture of what was actually going on emerged—it was the damn Malinese, actually, allied with the Babylonians; the “evil empire” bloc from the neighboring continent. They were maneuvering the Mongolians into a proxy war to weaken the free world.

The only way to definitively eliminate the threat was to pacify the Mongolians. I let America do the hard work. While I secured the southern defensive line, the Americans sent troops onto foreign soil to annex Mongol cities. After a 20-year offensive and much expenditure of American blood and treasure, all that was left of the Mongolians was a small three-city rump state to the polar south. The rest had joined the American empire, which was now rickety from overexpansion. As for the Cold War between the two continents that sparked the proxy conflict, my Byzantines were able to convince both the Babylonians and the Malinese to accept freedom of speech and religion — the war ended, and we were soon getting along swimmingly.

This meant I could now turn my attention to my former ally, America, which had become grossly over-expanded, desperately trying to manage their formerly Mongolian cities, while my cultural footprint continued to bleed across their borders. Soon, San Francisco, which was by now 50% Byzantine, flipped; and my agents were experienced enough to foment rebellion in the former Mongol lands, leading to a civil war that swept up into America proper, cleaving it in two. At this point, I’d just completed the Manhattan Project and was constructing atomic weapons with my new best friends and former enemies, the Malinese. And not a moment too soon, as my most experienced agent (promoted six times for successful missions), my own beloved version of Rudolph Abel, was just captured by the Americans while spreading rebellion in Portland. He was summarily executed, and the Americans declared me their new “worst enemy.”

Nuclear annihilation is an option in Legends of the Revolution, but so is peace.

Nuclear annihilation is an option in Legends of the Revolution, but so is peace. And so is a victory through cultural influence or science. Unlike the dark inevitability of the apocalypse in Defcon, the Legends of Revolution toybox gives you enough options to bring your quest for global domination to a feel-good Hollywood conclusion, if you like.

You can choose one of the two filmmakers behind Bridge of Spies and follow their philosophy to end the game. You can go Spielberg, with a heartwarming, feel-good ending through the triumph of world culture or scientific exploration of the stars; or you can go full-on Coen Brothers, diving into an endless, pointless cycle of revenge. With Legends of Revolution, you have the power to play the Cold War as the confusing morass of terrible proxy conflicts and existential threat that it actually was—or as the sweet and chewy entertainment that we remember it as today.