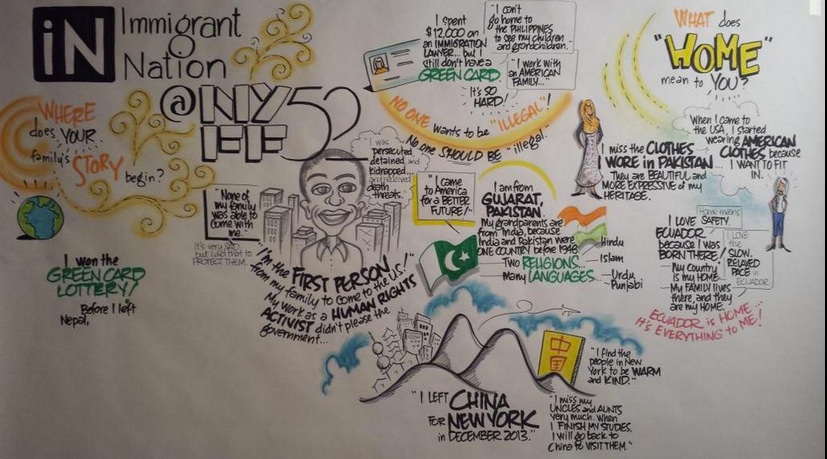 I’ve always had a fragile, fragmented sense of my own immigration story. Not because the details or dates are unclear (how could they be when they’re retold on repeat at the dinner table?). And not even because of trauma or any excessive difficulties. The fragility of my immigration story comes mainly from people’s reaction to it. Namely, their denial of its validity. Because oddly enough, despite the fact that I was born in Brazil, have two immigrant parents, and no American citizenship to speak of, the overwhelming reaction to me telling people that I am an immigrant is: “Yeah but not really. You’re American.”

What they really mean by that is I am white, and speak English without an accent. I don’t fit the typical markers of what an immigrant should look or sound like, so I’m denied the identity altogether. To most, it doesn’t matter that I speak both languages, or that I spent many of my formative years outside of this country, or that I never felt fully at home in it. I am not foreign “enough.”

On the other side of this contradiction is the typical practice of Americans taking ownership over wherever their ancestors hail from. “I’m a mutt. An Irish-Polish-German mutt, ” I’ll hear people say, the same people who deny me—a first generation mix of Brazilian, Swiss, and Lebanese blood—my immigrant identity.

“The overarching idea is that we all came from somewhere else.”

Therein lies the double standard of this country’s sense of what is foreign. As a melting pot of cultures, only a tiny percentage able to claim true origins to the land, being American means being varying degrees of foreign. Yet a broad and diverse understanding of what the word “immigrant” means usually stops somewhere in the last century.

“It’s a commonality we all have,” says Theo Rigby, director of the interactive storytelling project Immigrant Nation. “But we don’t often think of it that way. If you’re family that has been here for generations and you meet someone who just came over from another country a year ago, you won’t automatically think that we have this shared history. But the overarching idea is that we all came from somewhere else.”

Immigrant Nation (or iNation) is a platform built around that commonality. As a digital story hub which hopes to serve as a space to tell “our collective immigration story,” iNation asks everyone the poignant questions like “Where does your family’s story begin?” or “What does home mean to you?” Anyone can sign on to tell their story, decorating each part with pictures, adding a title, before tagging and geolocating their immigrant journey. The geolocation tracks your family’s migration on a data map, depicting the waves of different nationalities that migrated to America throughout the centuries.

“Within those waves are these circular cycles,” explains Theo, “where new immigrants are discriminated against and told that they don’t belong. The Chinese came and built the railroad, then there’s the Chinese exclusion law of 1882. Then all these European immigrants come to New York and the east coast, with waves of Italians and Polish coming in. Now there’s Latinos.” Each story of displacement, loss, and hope for something better on the iNation website is underscored by these graphs. If you click through enough stories, you begin to identify that pattern of exclusion yourself. A vicious cycle of migration, discrimination, before finally adaptation. “We’re trying to explode that notion, the ‘you don’t belong here’ theory, which recycles every couple generations. Because in reality, that’s a narrative we all share. That’s our commonality.”

At it’s heart, iNation shows that a country which lacks an overarching origin narrative can only find commonality through its diversity. We are the same because we are different—no two stories, whether come from the same immigration wave or not, are either too alike or too dissimilar. It puts a face on the statistical majority of America, which will and always has be some degree of foreign.

The project includes two other components, including live events and an expanding library of short films. “People respond really strongly to someone saying ‘You’re story matters. I care about your story and we want to hear it.’ People don’t get asked that question,” Theo explains. So the central part of each live event, whether at a museum or school or festival, is the story sharing bit when members of the audience become the storytellers. The idea is that by providing a space (whether digital or physical) for all narratives to stand together in juxtaposition, we’ll see something unifying rather than dividing.

During their event as Ellis island, for example, an old woman who had immigrated through the island as a young girl stood up first in the audience. She told the story of how her parents escaped from concentration camps to be together, only to bring her here to America. The room was full of high school immigrants in outreach programs, who were all from Africa or Latin America. “And these kids were just rapt with attention on this woman,” Theo describes. And despite the fact that it is often difficult to get high school kids to share at these events, “After she finished, the kids immediately started standing up and telling their own stories of, you know, ‘I was 6 years old when we crossed the border and we walked through a desert.’ Or the first moments when they got to the US on a plane, coming from tropical places and arriving in New York in nothing but shorts in the dead of winter.”

“It was just an amazing moment of transference from a post-historical Ellis island base. The way immigrants got here many generations ago, mixed in with the very current immigration story of youth who had just arrived, or gotten here five years or 3 months before the event. That’s really the end of the whole project: to map the immigrant story, old and new, and put them in the same space so we can see how they’re really all our stories. How connected we are.”

Currently, iNation houses two short films (one of which you can watch for free here), with the third being currently filmed now. They hope to continue improving and adding to their online platform, and are will also set up a permanent booth at Ellis Island in order to allow visitors to share their stories.