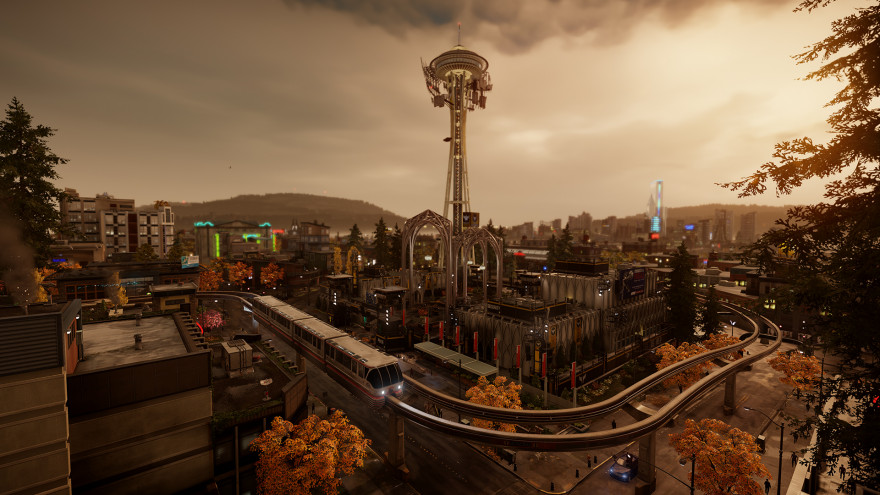 Somewhere, perhaps, amidst its gleaming, crystalline citadels, vine-strewn tenement brickwork, and rain-glazed asphalt flickering garishly in the sun, Infamous: Second Son bears all the hallmarks of a bona fide eighth-generation game. The miles-wide sprawl of an open world is nothing new, of course, but never before has an open world been so thoroughly, meticulously, and exquisitely adorned. The degree of detail, of utterly superfluous ornamentation, staggers: Handsomely bannered lampposts advertise a forthcoming music festival. A hand-painted Sub Pop mural slathered across a building’s stony broadside sits cracked and gently fading. A Chinese restaurant’s turquoise neon sign hums and flutters, one letter on the cusp of burning out. Approaching a finely marble-tiled nightclub entrance to better scrutinize its trimmings—a glowing blue-and-red “Open” sign, a sticker plugging Mastercard, an ATM perceptible just behind the frosted-glass door—I heard the muffled thump of distant techno, the rhythm of a party thriving somewhere deep within. This is the texture of reality. And these are the details you only include because you can.

The luster of these surfaces, of the city’s well-buffed sheen and the sparkle of its light, dulls rather quickly. After you’ve spent about an hour bounding through Second Son’s nu-Seattle streets, every moss-flecked tree and wood-latticed fence begins to look sort of indistinguishable, much as they do in real life, until the extraordinary settles into ordinary again. Soon, like a tourist tired of the scenery, you start looking for something to do: you weave through back alleys, exploring intriguing crannies, scouring every district for anything like a meaningful interaction. Well, it turns out that nu-Seattle is not that sort of place—not much of anything really happens here, other than the occasional rainfall and a lot of milling about. This city has been elaborately assembled and beautifully furnished, but it remains closed to you. The winsome little karaoke bar on the corner, the cafe flanked by lily-white patio seating, the Irish pub in the center of the cobblestone square: they’re cardboard cutouts propped up to make you feel like you’re living in a world that lives and breathes. Second Son certainly captures the look of a real world. What it lacks is any sense of life.

This city has been elaborately assembled and beautifully furnished, but it remains closed to you.

Ah, so what about death? Second Son, as promised by its pedigree, boasts ample opportunities for mayhem and carnage, which are in a sense the game’s bread and butter. Though the game’s simplistic morality system encourages players to choose between killing or “subduing” enemy forces, in practice the distinction proves negligible—you’re still swinging through their number armed and with abandon, and whether they’re rendered dead or merely immobile, the effect is the same. Variety is not exactly among the game’s strengths. The enemies in question—juiced-up storm troopers in unmissable yellow onesies—appear unchanged from the beginning of the campaign to its very end, facing you down each time without the slightest reconfiguration of strategy. And while they’re resigned to fight equipped with an identical arsenal, you’re endowed with increasingly robust powers, not so much changing the style or tenor of these battles as steadily making them easier. Lest you bore of the waning challenge, the game conspires to thwart you the only way it knows how: by upping the numbers. You defeated five enemies handily? Fine. Now fight ten more of the same.

The main campaign follows a fairly straightforward template: you’re bestowed a new power, invited to enrich it by consuming power-ups strewn nearby, and, once duly bolstered, asked to flex your newfound strength by surviving a lengthy skirmish. Occasionally the game musters a more idiosyncratic mission—a detective-style challenge in which you photograph a crime scene with your phone, a rapid rooftop chase across the city—and then, with an air of helpless stagnation, has you repeat them several times over. The optional side quests are similarly repetitive: disrupt an enemy activity here, spraypaint a Banksy-esque whatsit here, find and destroy a hidden camera wherever they can cram one. Each of these missions are duplicated identically throughout the city. None of them, alas, are fun.

What does that leave you with? As activities go, remarkably little: the campaign runs a half-dozen hours on normal difficulty, already stretched paper-thin, and in its absence you’re merely left to deal (all too easily) with the remaining enemy holdouts scattered across the map. Well, at least it’s a pretty map. And a pretty face, too, in command of it all—Deslin, the punky hero, is a vividly realized figure, even if his personality leaves something to be desired. (Here, as elsewhere, the game is a marvel of technological prowess: the facial animation is some of the best I’ve ever seen in a game.)

Perhaps it’s enough to roam the empty streets in fleeting awe of their high-gloss veneer. This is a quality worth savoring; indeed, it ought to be relished like the last bite of a bank-breaking filet mignon, whose flavor you hope lingers as you make to settle the bill. Sucker Punch have quite obviously enjoyed the luxuries afforded by the technology at their disposal, and why shouldn’t they have? If the purpose of the game is to inspire confidence in the extent of the console’s power—much in the same way that Killzone: Shadow Fall seemed designed chiefly to dispel an encroaching sense of buyer’s remorse—it accomplishes its task admirably. Inexhaustible resources have been marshaled. Technology has been strained. Limitations have been sought out, reached, surpassed. Only one challenge remains: make a good game with it.