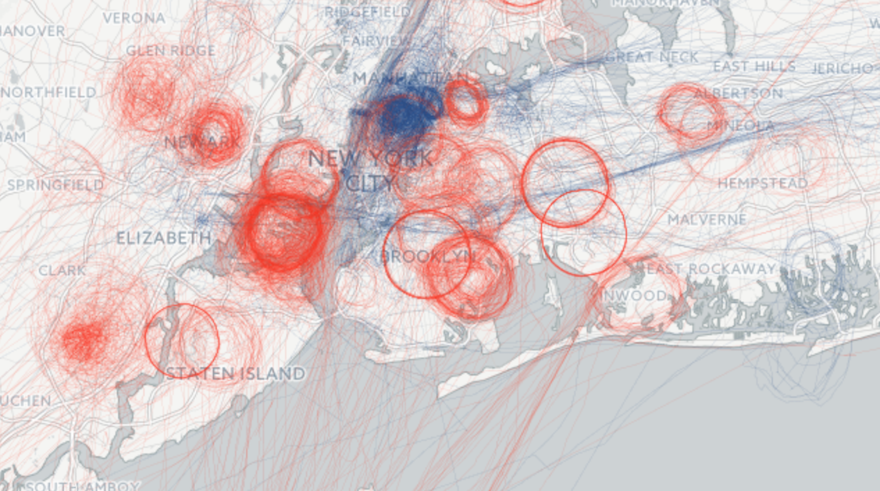 In an analysis of over 200 federal aircraft using the flight tracking website Flightradar24, Buzzfeed has put together a visual compendium of where and when government planes have been flying over US soil. The results, concentrated overwhelmingly over urban areas, spanned across flights from August to December of 2015, providing a glimpse into what the government gets up to when we’re not looking. Buzzfeed makes the helpful choice to display this terrifying data using an interactive graph with flashing colors.

Weirdly, once you stop thinking about the meaning behind the map and start dragging and dropping it, it becomes a game: was your residence important enough to get noticed? The spinning lines over New York seem less intense when you zoom out, and Atlanta is so bright! Look at all the blue over Tucson! There’s nothing in St. Louis but there’s a constant dot around Buffalo, Missouri; a reminder to us all that Buffalo, Missouri exists. The envy makes perfect sense when staring at the colorful map, but becomes nauseating when you remember what the lines actually mean.

was your residence important enough to get noticed?

Although Buzzfeed would have us overwhelmed by the amount of information presented here, it takes more than foreboding circles to scare a denizen of the Internet in 2016. These graphs are scary, yes, and they’re important, but their impact is dulled by what we already know. The fact that the FBI has a host of front companies to cover these flights is more regretful than shocking, and knowing that surveillance planes circled local mosques in the wake of the San Bernardino shooting is important to understanding how our government operates. We already know that the NSA is reading all of our emails and that the FBI has no qualms about paying hackers to unlock phones; racial profiling from the literal sky doesn’t seem far-fetched anymore. If you live in the United States, these “revelations” have become commonplace. They’re just another one of those things we’ve learned to accept.

So, yeah, the conspiracy theorists, libertarian subreddits, and recent revival of The X-Files have a point: the government is most likely watching us from the skies. But what do we do with that information?

Simple: drag and drop it.

Explore the FBI’s attempts at being covert at Buzzfeed.