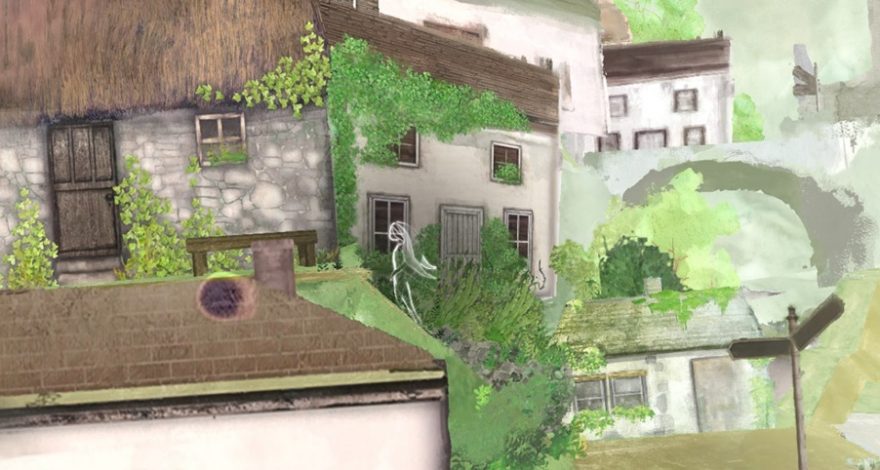 Sandro Magliocco spent his childhood playing around and exploring the medieval coastal town of Carlingford, Ireland. So when his Slovakia-based, multinational team at Joint Custody decided to set its debut title in Ireland, it made sense for him to revisit those early memories and set the game in a place he knew well. But more than that, Magliocco argues that the Cooley Peninsula—where Carlingford is located—lends itself well to a videogame environment for two reasons.

“Firstly, there’s the geographical variety, from the mountain of Slieve Foy looming over Carlingford village, to the forests and hills connecting to the village of Omeath, and the waters of Carlingford Lough. These areas blend seamlessly, making it feel like a larger world than it actually is (which works well for the game, allowing to you to get around quickly),” Magliocco told me. “The second thing is the history in this region, from megalithic tombs to medieval streets and castles, all providing distinct landmarks and settings for us to enrich the world with.”

The Irish town of Carlingford (Source)

The game is called Scéal, which essentially means “story” or “tale,” and follows the spirit of a young girl as she searches for the lost memories of her life. She does this by using a magical storybook as the medium with which to navigate the game’s watercolor world. In the first episode, released on Steam back in October, the idea is to get familiar with the layout and tone of the world, but later episodes will tease out the history of Carlingford. “I find it very interesting when this approach is used with real, historical places (e.g. the Assassin’s Creed franchise), because you’re working with something that has already many, many layers of narrative buried below its cobblestones and ruins,” Magliocco said.

Other than the real-world history embedded in the town of Carlington (referred to by the tourist board as an “outdoor museum”), Joint Custody drew from various Irish mythology and the supernatural world for Scéal. The team’s approach to using this folklore is to give the game world a sense that it is unique but not alien. “From festivals such as Halloween, to creatures like the Banshee or Sídhe (faeries or angels), people already have some exposure and familiarity with aspects of Irish culture and mythology,” Magliocco said. “It is, in a sense, a world that becomes more familiar, the deeper you explore into it.”

A specific example of how the mythology is treated in the game can be seen when the player transforms into a Banshee—an Irish ghost, pained by the death of a loved one. How the Banshee is introduced isn’t with reels of text or exposition in any other form, but relies on her appearance and audio cues to give a sense of what she represents. This will be the same approach used to introduce the many other historical and mythological elements in Scéal.

“a feel that sits right at home in the Irish tradition”

Due to this subdued design, the music in Scéal is very important as it helps to create mood, and can even act as the primary storytelling device in the game. Hence it was key for Andrés Valenica, the composer and music producer on Scéal, to establish a conversation with the musicians and constantly tweak the melodies as they grew. Starting with English lyrics and initial “emotional components” such as mood and backstory, Valenica developed the arrangements over the course of a couple of weeks, going back and forth with the singers at first and then working out the melodies for the violin, flute, cello, and harp.

Central to this iterative process was Lorcán MacMathuna, a traditional Irish singer and the lyrics writer on Scéal. “Music is a sort of esoteric language so arriving at a common language or understanding can be difficult but once found, we could readily approach each melody with a clear sense of how to tweak the arrangement and style,” he said. As the vocal melodies guided the rest of the arrangement, it was important to drill down into the exact mood each song was meant to capture—identifying it as “danger” wasn’t enough: Was it tinged with dread? Was the threat unknown? Was there a sense of adventure or hope?

The English lyrics that the musicians started out with were quickly dropped in favor of Irish ones as it sounded more natural, fit the melodies better, and enhanced the distinctive Irish feel of the game. Capturing an Irishness in the music became paramount, especially as the game was imbued with traditional Irish stories and characters, which the music helped to tell—”there is a strong feedback loop between the events that happen in the game and how we expressed this through Irish music,” Valenica said. Vital to this was using the traditional Irish musical idiom within the vocal performances.

“We use ornamentation and modulation that you hear in Sean-Nós singing (the ancient form of indigenous Gaelic singing),” MacMathuna said. “While adhering to arrangements that matched the creative guidelines for specific moods and emotional undercurrents, we kept to styles and a modal idiom that would not be out of place in Irish traditional music. To me it has a feel that sits right at home in the Irish tradition.”

You can purchase Scéal on Steam and find out more on its website.