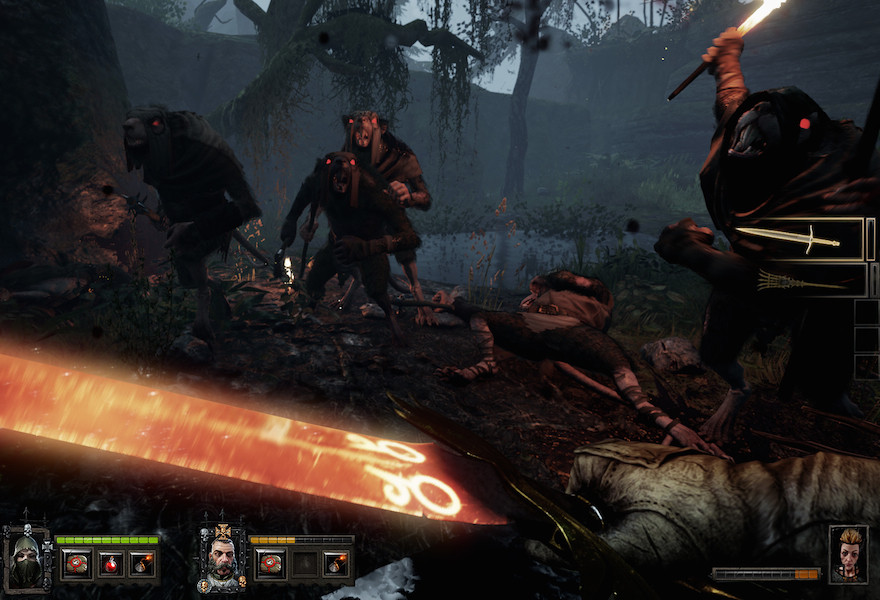 Ubersreik is a beautiful city: the rain-slick cobblestone streets, the gothic towers stretching up into the night, the carpet of limbs from two hundred ratmen I just killed. It’s unsteady footing, way up here on this corpse pile, but I see a whole wave of them burbling up from the sewers ahead, so I’ve got to be on my way.

They have a startling amount of character, these guys. Some are naked, save for a ragged loincloth and a rusty butter knife or a sharpened stick. Others are covered in thick armor and tote six-foot-long halbreds—they’re a little harder to decapitate, but Mama Dwarf didn’t raise no quitters. Some inventive sorts seem to have stuck their metal weapons in a fire long enough to heat them to a red-hot glow. One charming fellow has a gun that he must wind like an old clock before it’s ready to fire.

I wave hello to my new friends, with my axe. A line drive worthy of Tiger Woods separates three heads from shoulders. Their bodies stumble around for a second afterwards, like butchered chickens. I’m a little sad to see them go, but there will be more where that came from. There always is.

I’m glad that their tunnels run deep and their hordes are without number or whatever, because I kind of love the rats of Vermintide. I’d hate to be bereft of them because of one greedy cleave too many. Like any relationship, it took some time to develop intimacy with the rodent horde. The shrieking and sniveling sounded like white noise at first, but, like a traveler embedded in a foreign country, I started to pick up bits of the lingo as I went forward. “Die, elf bitch!” was one of the first lines I actually parsed. It was nice to find out we carried some sort of notoriety when I made out “We kills they! Gets the reward!” Well, “I’m on fireeee!” sort of translates itself regardless of mother tongue.

I wave hello to my new friends, with my axe

I grew to love listening to their chatter, but learning to love killing them didn’t take much time at all. Sometimes, when I hit a ratman, he’d just fall apart like a Lego person, limbs and head and torso falling into a cute little pile on that ground. But the game is is big on fidelity in these corporeal matters, and will often render for me in beautiful detail just exactly how I’ve ruined any particular meat-vessel. The first time I thwocked a rat’s arm off with a downward chop of my axe, he just screamed at his stump until I brought it down on his main self next.

It’s delightful in a way that doesn’t really have anything to do with the gore, I think. Your strokes have a visible and immediate impact on the world you’re playing in, and the line of cause and effect is so clean—whack a vermin at neck level and get a severed head. Your input is enacted in the world so swiftly and specifically, fighting feels almost like a creative process. They’re the canvas, and I’ve got a very sharp paintbrush.

As much as all videogames tend to be internally referential, it’s hard to have a discussion of Vermintide without mentioning Valve’s 2008 zombie game Left 4 Dead, from which a tremendous amount of Vermintide’s basic systems are lifted. Every round is about going from point A to point B safely, managing your resources carefully, and dealing with both massive hordes and smaller detachments of enemies. I’m fairly certain even the bandage wrapping animation is the same. But hey, everyone needs role models, and if you’re going to pick a game to emulate, Left 4 Dead is a pretty good choice. Vermintide makes a lot of smart little changes and additions without altering anything big, for better or worse. The most notable improvement by far, as I hope I’ve made clear, is this game’s take on the innumerable foe.

The Skaven, which is the official name for the ratmen, are “chaos-born.” Whatever that means in-world, it’s the game’s way of telling me that I shouldn’t feel bad about rendering them to stew chunks. And they do seem to be asking for it, often, running in just as you’ve reloaded your blunderbuss or gotten a nice backswing prepped on your zweihander. But I’ve also seen them hesitate; after their first two ranks of brood-chums get chopped like a mixed salad, sometimes the Skaven stumble back, wanting to keep their blood inside their bodies a little longer. Separated from the pack, I’ve seen ratmen press themselves up against a wall, obviously terrified. That kind of vulnerability isn’t something I’m used to in games about mowing down waves of enemies. I’ve never seen a zombie confront its own mortality.

The titular vermin of Vermintide may come in a horde, but they’re all unique, in their weird, chittering way. It almost makes me feel bad about the carnage I’ve spent the last ten hours dealing out to them.

Then again, there will always be more.