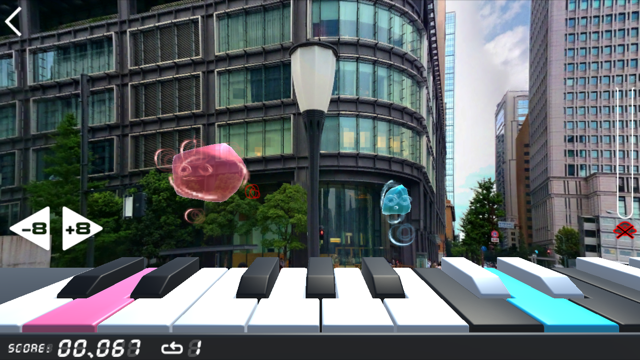 Imagine you’re sitting in a forest, soothing melodies chiming in all around you. There’s a keyboard in front of you, and color-coordinated blobs approach you. Instead of repeating the melody you hear as in most other rhythm games, you must hit the keys according to the pitch you hear. This is furusoma, the new mobile game from music-game connoisseur Masaya Matsuura.

Matsuura has created some of the most inspirational rhythm games of all-time. Some would even credit his first title, the quirky hip-hop styled PaRappa the Rappa (1996), as popularizing the rhythm game genre. Given this, it shouldn’t be much of a surprise to find out that Matsuura’s a musician outside of his involvement with videogames. From the mid-1980s to the mid-1990s, Matsuura rose to fame within the prog-rock-pop band PSY•S, before announcing their eventual disbandment in 1996. This was around the same time that Matsuura flung himself headfirst into game development, founding game company NanaOn-Sha back in 1993. Through his company, he created some of the most iconic PlayStation titles of the console’s lifespan.

It’s not so much about complementing the music, but making it come alive

The mobile furusoma’s a new type of music game. Instead of relying on parroting melodies or syncing up notes simultaneously with the music, the goal instead is to match pitches. The pitches are color-coded per ominous blob that approaches and shines its hue onto its corresponding keyboard key. “You must respond to the pitch to move the music forward,” explained Matsuura in a pre-recorded presentation for the IGDA Switzerland Demo Night. Hit the wrong note, and points are deducted from the player’s overall score. It’s not so much about complementing the music, but making it come alive.

While Matsuura’s hardly been at the forefront of music games since his iconic PlayStation classics, he’s remained prolific in the industry. He’s generated a few sleeper titles (like the 2007 iPod game Musika), and a couple critical misses (even within another collaboration with PaRappa the Rapper character designer Rodney Greenblat). He even contributed music to the Apple TV-based Harmonix game Beat Sports (2015). But where he brought the rhythm genre to prominence with the undeniably charming PaRappa the Rapper and UmJammer Lammy (1999), and proved his worth as an innovator with the uniquely generative Vib-Ribbon (1999), furusoma doesn’t leave Matsuura with anything left to prove, just that he’s here to stay.

Don’t give up, you gotta believe (and download furusoma now on iOS or Google Play for free).