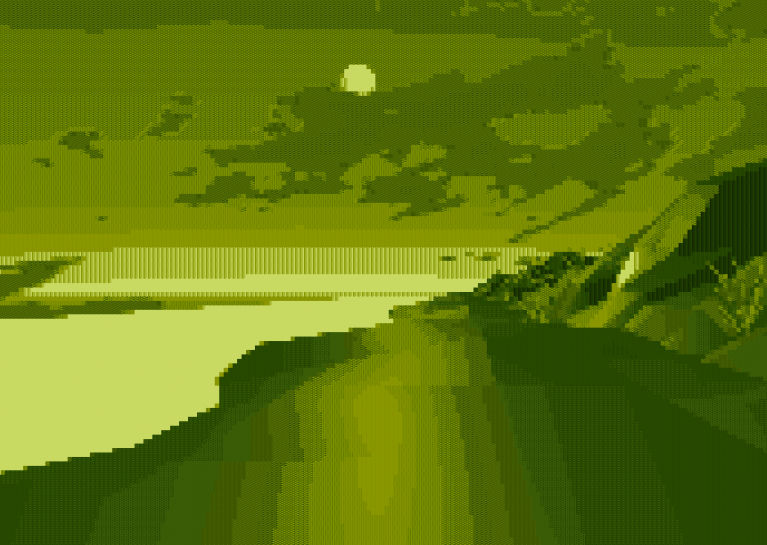 I’m not a beach person. I don’t like when sand gets in my shoes. And I don’t like wearing sandals to avoid that very problem either. I live in San Francisco, where the beaches are notoriously windy and cold, not sun-kissed and surf-ready. When I think of beaches, I often wish I were thinking of something else. But Virtua Walker ‘87, a virtual reality game borne from last weekend’s Global Game Jam, imagines a different kind of beach—one that I might even fancy walking along.

The 2-bit color limited Virtua Walker ‘87 was developed by the Scotland-based Robin Sloan, Paul Robertson, Dayna Galloway, Sonia Fizek, Gordon Brown, and Grant Clarke during the latest Global Game Jam, which had an omnipresent theme of “waves.” On the game’s Global Game Jam page, its developers note that the game is a true walking simulator, as it seeks to “emulate the actual distances and walking times on the corresponding beaches.” So, like walking on an actual beach. No environmental storytelling to be found here.

To fully immerse the player, Sloan and the rest of the team constructed a “revolutionary” Arduino-powered box filled with sand for the player to walk in barefoot. Two particular sensors in the box are able to detect when a player is walking on top of it. The game also boasts 8-bit sounds, which was a requirement from “Chipping In,” an optional “diversifier” for the 48-hour game jam requiring the project at-hand to only feature 8-bit style audio, visuals, or even both. Virtua Walker ’87 only features the latter (though with 2-bit visuals to boot).

Virtua Walker ‘87 looks as lo-fi as can be. “[The game was] conceived as an ill-thought out 1980s virtual reality prototype, developed by an ambitious startup that had grand ideas about virtual reality and the creation of a full sensory user experience,” reads the game’s surprisingly lore-filled description. “Neither the technology of the time nor the overall product design matched this ambition. Virtua Walker ‘87 was driven by hype, but in actuality it is an uncomfortable experience to endure.” Be sure to shake all that sand out of your shoes when you’re done.

You can download a build of the project here, compatible with the Android-capable Samsung Gear VR. Sandbox not included.