You wake up. It’s the alarm, but you’re not groggy. Actually, you’re not even dreading getting out of bed. The sun is shining, birds chirping, your body is #ready for the day. Opening up Twitter, a brief jolt of pleasure flushes over you after seeing that you received twenty notifications over night. “Hello, who invited Ms. Popular for a sleepover?” you think to yourself, clicking on the messages.

What follows is a Twitter version of that scene from Troy in which Brad Pitt drags Eric Bana’s maimed corpse across the desert. It’s an overdone kind of take down—like that moment when Achilles starts making the fight a little too personal, and it just gets awkward for everyone involved.

#Notifications, by Cameron Baker, distills the toxicity that many (particularly those in the gaming industry and high school) have become accustomed to in their day-to-day life on social media. The perpetual shitstorm begins the very second after you accidentally post something “controversial” (all it takes IRL is a simple, “Huh, why can’t we all just get along?”) to Twiddler. After this fatal mistake, you are swept into the hellish, never-ending loop of internet idiocy, the red notification bubble always duplicating with more hatred at all hours of the day.

Whether Twitter toxicity has become a mundane occurrence or it’s your very first time at the rodeo, you’ll notice an interesting pattern develop throughout the experience. At first, being on the receiving end of a Twitter hate mob feels like a violation of your very humanity. As the perpetual diatribe of hate messages beats over you, again and again, wave after wave—like the worlds most poorly designed endless runner—you ask yourself, “Don’t these people know there’s a human being at the other end of the computer?”

But as #Notifications emphasizes with its minimalist and repetitive design, eventually, you yourself stop seeing the people on the other end of the computer as human. The number of death threats and chants of “fuck you” constantly mounting on top of itself, you stop seeing its messengers as flesh and blood. You never stop to think about the fact that they eat and sleep and love and cry, just like you. You never once consider what brought them here, to all the fear and hatred they’re currently spewing at you. Your attackers become a meaningless number: a constant and quantifiable entity, but more akin to a disease than anything human.

more akin to a disease than anything human

Back in January, NPR’s This American Life released an episode about toxicity on the internet. In one of the most moving and thought-provoking segments in the show’s recent history, Jezebel writer (and Twitter target) Lindy West confronted one of her most horrifyingly diabolical trolls over the phone. To the listener’s shock, their conversation transforms from beginning with West’s angry tears, into a casual exchange about everything the unnamed troll had done to torture her. As West’s producer points out, the two eventually sound like old high school buddies, shooting the shit over embarrassing stories from their past together. As West declares after their conversation, “It felt really easy, comfortable even, to talk to my troll. I liked him, and I didn’t know what to do with that.” 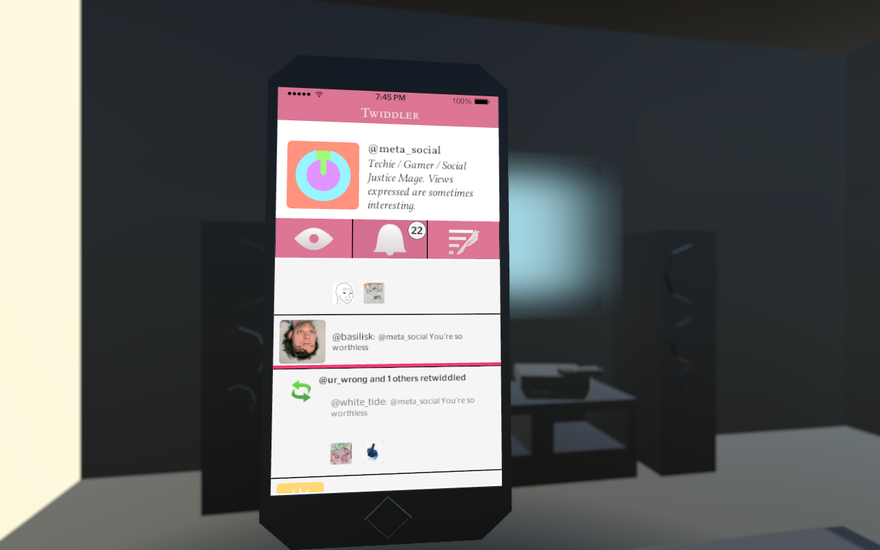 It’s so easy for us to see one another as random bits of information on the internet. The low-poly art style and first-person angle in #Notifications removes all sense of humanness from the scene, leaving you only with the faceless interactions on a smartphone. The only avatars in the game are the ones jostling around during the transportation part of your day cycle. Depicted as general shapes rather than specific people, even the bus passengers lose their individuality, becoming just another mob you deal with in your daily routine.

#Notifications seems to say that, no matter which side of the hate message you are on, we all fail to consider our most basic human instinct in the process. Caught in a catch-22, we use these communication technologies that evolved far faster than our brain’s capacity to produce empathy, causing us to inevitably lose sight of its beauty and purpose. Whether you are the attacker failing to see your target’s humanity, or you’re the target that’s too numb to see the human problems which lead to your attackers actions—we all lose in the game of #Notifications.

You can play #Notifications on PC and Mac for free now. Be sure to follow creator Cameron Baker over on Twitter, but only if we can all promise to always remember he is a human being.