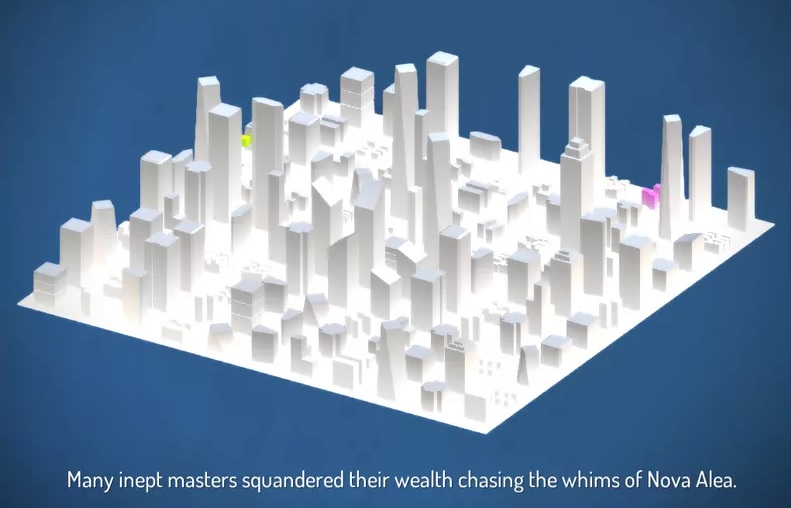 Molleindustria’s Nova Alea is a parable in search of a game. It is the story of real estate speculation, housing bubbles, and capitalism run amok.

The story takes place on a chessboard—that or a graveyard for skyscrapers. Maybe both. “For its masters,” the gentle-voiced narrator intones, “the city was a matrix of financial abstractions.” Note the use of the past tense: that’s the first sign you’re inside a parable. The powers of finance are represented by a tilted pink cube—think Tony Rosenthal’s “Alamo,” but cuter—that floats above the city. More accurately, it looms, dropping capital in underdeveloped neighborhoods and hopefully extracting profits before bubbles burst. Do it well and you’ll become rich; get the timing wrong and you’ll go bust.

Only it doesn’t really matter if you do a good job as a speculator. Nova Alea is transformed regardless. Shadows are cast by growing towers. Longstanding communities, one hears, are pushed out. Sure, some of the speculators may go bust, but that doesn’t return the displaced to their communities. There is nothing left for them to come home to. The logic and consequences of high-flying capitalism, as represented by the cube, has nothing to with life on the ground.

It also doesn’t really matter if you do a good job as a speculator because Nova Alea is impervious to human inputs. Your clicks move the game along, but they just bring about set queues and beats. Molleindustria’s is a game that tells instead of showing. There is no solution to the problems presented, just a vicious cycle in which you impotently click away into the ether.

Nova Alea has blind spot for all but its intended targets

People are an abstraction in Nova Alea, which is both the game’s central point and its biggest problem. At a certain point, Molleindustria’s criticism of capitalism’s cold indifference to the little people morphs into its own cold indifference to the little people. That point, incidentally, is when the “weird folks” arrive. “In the craters left by the cyclical crisis,” the narrator sweetly intones, “the Weird Folk settled. The Weird Folk brought an organic life to the shiny metal city, stimulating dormant desires.” They are some form of hipster, one imagines, perhaps the more accurate description would be that the “Weird Folk” are Richard Florida’s “creative class.”

Are these “Weird Folk,” whoever they may be, not also dislocating some residents? Do their actions not have economic consequences? The parable of Nova Alea has no room for these questions, but they linger nonetheless. This is a game that proposes that actions within the carefully calibrated ecosystem of a city have consequences yet seems blind to some of them. To be fair, the “Weird Folk” and speculators are in no way equals, but Nova Alea has blind spot for all but its intended targets.

The game’s chessboard is literally and figuratively white. That is its only constant. Nova Alea is curiously impervious to the effects housing policy on different racial groups. “If zero is a measure for perfect integration and 100 is complete segregation,” writes BBC News’ Rajini Vaidyanathan, “analysis from Brookings showed most of the country’s largest metropolitan areas have segregation levels of between 50 to 70.” The construction of Nova Alea simplifies and stylizes certain facts, but this is more than a simplification. Vaidyanathan continues:

Racial and socioeconomic segregation are closely linked – if you’re a black person in America, you’re more likely than a white person to live in an area of concentrated poverty.

This isn’t simply a matter of choice, or chance. Some of it is by design – and down to decades-old housing policies which actively prevented African Americans from living in certain areas.

Nova Alea, as with much of Molleindustria’s output, belongs to a form of leftist criticism that prioritizes class above all else. As such, it is often good at identifying big villains, while struggling to identify challenges at ground level. The “Weird Folk” is slippery abstraction, rendered as green cubes, that avoids careful interrogation. Nevertheless, the game’s blind spots are often more noticeable than its points. There are no people in the ultracapitalist’s dreamscape, just as there are none in Molleindustria’s. If Nova Alea is a parable for our age, then, it is perhaps an account of more flaws than its creator might care to mention.