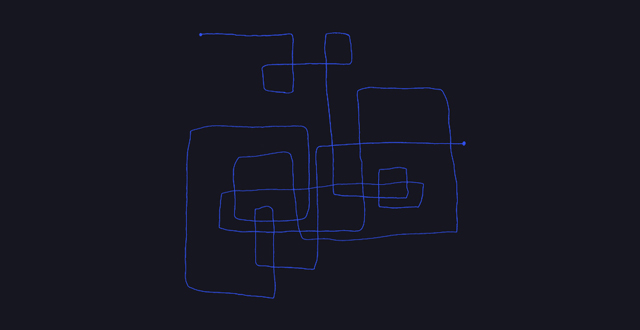 Pac-Man Championship Edition DX is a linear game in the truest sense of the word. It is built around two-dimensional pathways, a merry chase in which the only escape from one’s pursuers is directly forward. Some games concern themselves with story, others with mechanical progression; this game is in the business of lines.

You’ll notice I said, “chase.” That is because, as he goes about his gluttonous business this time around, Pac-Man awakens an ever-increasing number of slumbering ghosts that pepper the map. Ghosts are not morning people. Ghosts are ghosts, and as we all know, it is best to leave sleeping ghosts in peace. I have seen their kind before, that quartet of disinterested wanderers from past Pac-Man games, each one little more than an easily avoided hazard. But these specters are different. As they awaken, they eschew the random patrols of their forebears and give scowling, single-minded pursuit.

In short order, Pac-Man finds himself tearing through a darkened dungeon trailed by a Technicolor train of doom, thirty shimmering ghosts trying and failing to catch the jaundiced maw. Row after row of dots is devoured, fruit bonuses are consumed; and the game gets faster, faster, faster until it is practically skipping across its own surface tension. The walls of the labyrinth are pulsing. There is house music playing. Ten more ghosts awaken and join their friends, and the longer the ghost-train grows, the harder it becomes to chart a course to safety.

Previous iterations of Pac-Man have reveled in classic simplicity, and so this kind of fundamental mechanical shift feels drastic. Pac-Man‘s underlying imperative—Consume!—has become more nuanced: Consume Forward! A game that was once about reflex and reaction becomes about cartography. I chart a course in my mind, reading into the future as far as I am able. My goals remain the same as when I played Pac-Man as a kid: I want to eat the most dots I can in the brief time allotted. I want to synchronize my power-ups so that I achieve an impressive score. I don’t want to die. And yet, with my growing number of spectral followers, my directional options have narrowed significantly. As long as my deadly entourage maintains its rainbow hues, the path to survival lies straight ahead. And the moment a power pellet turns them a harmless, delicious shade of blue, I do an about-face and the feeding frenzy begins in earnest. The longer the train, the higher the score, until no ghosts remain and the cycle begins anew.

In the liner notes for Miles Davis’ 1959 jazz masterwork Kind of Blue, pianist Bill Evans writes of the Japanese visual art suibokuga, describing it thusly: “[The artist] must paint on a thin stretched parchment with a special brush and black water paint in such a way that an unnatural or interrupted stroke will destroy the line or break through the parchment. Erasures or changes are impossible. These artists must practice a particular discipline, that of allowing the idea to express itself in communication with their hands in such a direct way that deliberation cannot interfere.”

Although there is more to suibokuga than lines on a thin parchment, to those who own and cherish Kind of Blue the metaphor could not be clearer or more apt. Here is a recording of remarkable fluency and abstract beauty, a snapshot of harmonic and rhythmic momentum that has never truly been recreated. Coltrane’s tenor saxophone rises and falls with a noble, lionish grace; Davis’ muted trumpet walks a deliberate, logical trajectory. Cannonball’s alto sax melodies snake and shiver, and all three of their single-note paths dip and dive over a spacious harmonic foundation. Kind of Blue is six suibokuga artists drawing six lines, twisting over, under, and through one another. And by the album’s end, the parchment remains intact.

But let’s not get carried away. This is Pac-Man we’re talking about, after all. And yet here I am, music in my ears, pursuers at my tail, methodically and then frantically drawing line after line; planning, adjusting, improvising, and planning again. If I pause, the parchment will break—the ghosts will catch me, Pac-Man will shrink into oblivion, and the line will be broken. But my course is charted, and my hands communicate my intent with such directness that deliberation could not hope to interfere.