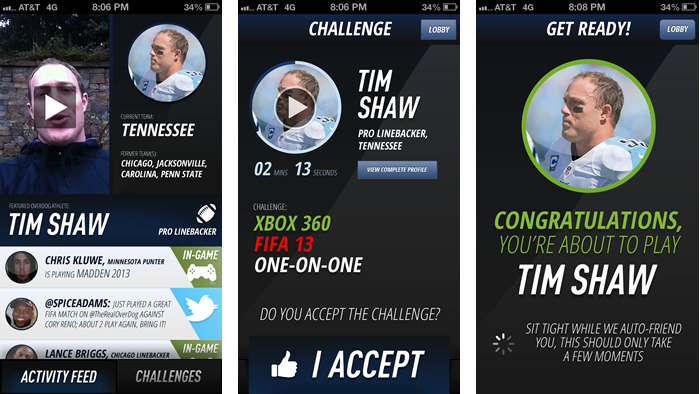 There are three things in my life that I am borderline unhealthily infatuated with: video games, celebrity culture, and rap battles. OverDog is a new app that preys on those first two.

OverDog allows you to play video games against a whole cavalcade of professional athletes. Athletes send out a video challenge when they’re online, OverDog randomly selects a subscriber (or several, based on the game) to play against them. Then, hopefully, they’ll think you’re so good at video games that they’ll fly you out to their mansion to hang out with you and you’ll joke around and hit it off and be pals forever.

We were able to ask Hunter Hillenmeyer, former NFL linebacker and current wizard behind the curtain of OverDog, a few questions.

It used to be that you would hear or read crazy stories of athletes as rock-stars, going out and partying and all of that. Now, though that perception still exists for some athletes, it seems like more and more athletes are living relatively low key lives. Why do you think this is?

Part of that perception just has to do with the fact that the guys who go out and make a bunch of noise are the ones who make the headlines.  Staying home and playing videogames or watching a movie with the wife and kids isn’t exactly newsworthy. There are definitely still athletes who like to have a good time, but most of the really great ones take their craft pretty seriously.

Has any athlete that you hadn’t initially touched base with contacted you since launch?

You hit the nail on the head. Just since our campaign launched we’ve added more than two dozen more athletes, including some high profile names like Randy Moss and Takeo Spikes. The publicity has been amazing, as has the feedback from fans and potential customers. The only downside is that if every person who said “This is such a cool idea; I can’t wait to use it,” had followed through and backed us on Kickstarter, we’d have already hit our funding goal.

User feedback, now and during our beta in April, will be so important to OverDog’s evolution. We think of the people who sign up for exclusive access via Kickstarter not just as customers but as brand ambassadors whom we hope will help suggest improvements, additional features they would like to see, and even help with recruiting and adding new athletes to the platform. We are rolling out the red carpet for our early backers.

Both video games and sports are pretty popular things. Odds are you’re going to have a whole bunch of users on at the same time trying to challenge the population of athletes. It seems like there could be 10,000 people online at the same time trying to challenge one man. How are you going to balance this discrepancy between the amount of fans and the amount of athletes? What do you predict the fan’s odds would be of getting to play against an athlete on any given day?

Certainly there are more fans than athletes, so this is an issue we focus on every day. There are a couple things worth mentioning that immediately alleviate this concern. First, a lot of the most popular games are multiplayer, so your typical game of Call of Duty can have 5 or 11 winners. Second, we hope to allow college athletes and even people like musicians and entertainers use the platform before too long.

Who wouldn’t want to watch Lebron taking on a Celtics fans in NBA2K?

Most importantly, our development team wakes up every day exploring ways to make sure every user has a great experience on OverDog, even if they aren’t the one playing the athlete. That means we plan to host fan vs. fan events where a Bears fan can play with his Bears against a Packers fan playing with the Packers. Spectator mode is also right on the immediate horizon. Who wouldn’t want to watch Lebron taking on a Celtics fans in NBA2K? I’d certainly love to watch that match take place, especially if I can hear Lebron and that Celtics fan talking trash. An OverDog subscriber will have immediate and unlimited access to all those experiences and all of that content once they are available.

Are there plans to expand past athletes, involving celebrities from other mediums?

Yes, we have, but without going into too much detail, we are focused solely on providing an outstanding experience in this one specific area for right now. Yes, it would be cool to play Guitar Hero with Slash, Dance Central 3 with Usher, or a trivia game with Ken Jennings, but we don’t know if those people play those games. Athletes, on the other hand, already love all the games you want to play with them.

A big part of what makes Overdog work is the universality of video games. What is it about video games that unites vastly different people, like an NFL Linebacker from St. Louis, and a writing intern from Upstate New York?

OverDog is built around that same idea. You might not be able to dunk on Kobe or tackle Adrian Peterson, but we’re all equals when you put that controller in your hand. It creates a new, democratic power dynamic. That’s something we are excited to see play out on OverDog.

You’re tasked to assemble an All-Star team of gaming athletes. Who makes your starting 5? Why?

I’ll assume you mean based on gaming prowess and not star power. I gotta put our advisory board member Chris Kluwe on there first and foremost. He lives and breathes video games. Kevin Durant is a huge gamer. He travels with his console and has a really good rep as a gamer. NY Giant Michael Boley is serious on CoD. He plays for hours everyday. I wanna see how me matches up with elite players on the fan side.

Two more guys. I’ll say Mark Clayton, former Sooner and Baltimore Raven. He is truly elite at Madden. He’s played in tourneys with the best in the country and holds his own. Last spot, I’ll give it to Chad Johnson. What he lacks in talent he makes up for with swagger and trash talk. I think he will be a star on OverDog. He loves FIFA and already plays with fans all the time, so I can’t wait to get OverDog in his hands.

I’m speaking solely for myself, and not for Kill Screen as a whole, when I say I’m amped for Overdog. I completely co-sign anything that will bring me one step closer to my longtime dream of playing a game of DEFCON against Vlade Divac, Scott Brosius, Franck Ribéry, Tim “Eater X” Janus and The Great Muta.