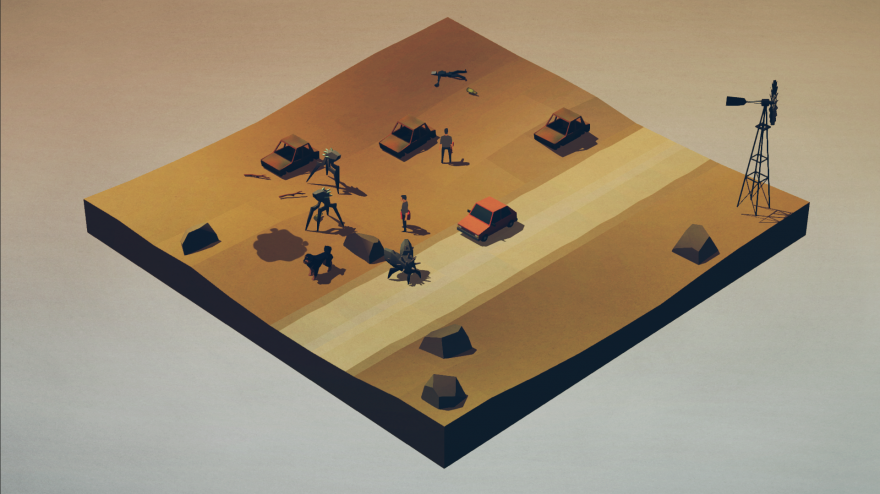 Overland has the look of something you could feasibly prod. It comes across as a series of cartoon-coated dioramas that are made to be admired up close. This is no accident. As designer Adam Saltsman explains in a new video about Overland, by having “clear, obvious visuals composed on a single screen,” what is usually an inaccessible genre—squad-based tactics in this case—is made “available to a new wider audience without sacrificing depth or challenge.”

The idea is to help a group of people survive a hellish road trip across a ravaged America. The most obvious threat are the sound-sensitive beasts that scuttle with deadly purpose across the grid-based environments. But, on a larger scale, the random generation of your journey means that you can’t rely on finding medkits, gasoline, weapons, or other supplies when moving forward. This uncertainty lends itself to the game’s constant risk and it’s why each move you make can seal the fate of one or more of your troupe.

devastating fatalism of this human-to-human drama

But this is only half of Overland, at least, according to how Saltsman describes it. In the video he details, at first, the “Encounters” on those grids. They are focused, tense, and require precise tactics to survive. As said, the visuals are the key component in making these sections exoteric. The other half of the game is referred to as “Interludes.” These usually take place around a campfire where you make “higher-level strategic decisions.”

That might sound imposing. But Overland‘s hardest decisions should be familiar if you’ve delved into any fiction set in the post-apocalypse. The idea is to oppose the inclinations of your heart against those of your head. “What do you do when there’s only one seat left in the vehicle? Do you take a healthy passenger with no particularly useful profession? Or do you try to save the wounded specialist?” Saltsman asks.

We can all grasp the difficulty of such a situation. It’s the devastating fatalism of this human-to-human drama that has made shows like The Walking Dead so popular. And so the theory goes that these tough but straight-forward choices pair with the game’s visuals in making Overland more widely appealing.

Unfortunately, with this new video comes the news that Overland is still a ways off yet. It should be coming to Windows and Mac in 2016. If that’s too long, then hopefully the new website that details the game will tide you over. There are also new screenshots as you can see below.