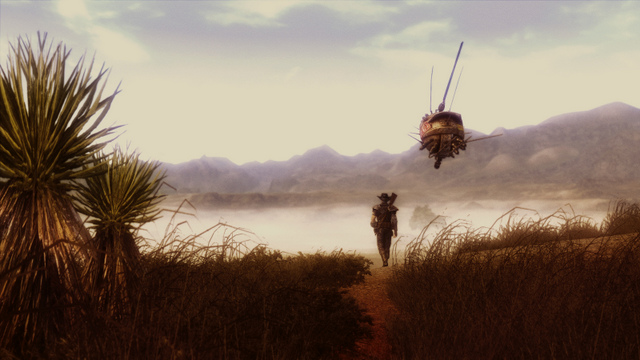 For once, all is quiet. The long grasses rustle as we make our way through the hollow, toward the ruins of a Soviet facility nobody remembers. The corroded pillars of a long gone building frame our approach, like the skeleton of a leviathan long dead. In the distance, an AK-47 barks. It’s a quiet moment in the world of  S.T.A.L.K.E.R..
Time, then, for a photo.With the rise of mobile devices, we are used to carrying powerful cameras literally in our pockets, at any time, anywhere – and so we take pictures. With the ease and cheapness of digital photography, and the ability to share these pictures with the click of a button, our motives have changed: Now, we take pictures of ordinary things, funny things, of shopping lists, clouds, everyday occurrences.

Of course, we also like to immortalize the special moments in our lives – the grand vistas, the momentous occasions, the triumphs and memorable achievements. And as with many other things, these moments have also drifted into the virtual spaces we inhabit.

It shouldn’t surprise us that the photographic gaze, that eye for composition and purely visual aesthetic, finds ample opportunity for snapshots in these virtual spaces. But typically, we document to record our triumphs and victories or perhaps to add wallpaper to our desktop. In fact, it’s surprising that in-game-photography — art for art’s sake — is still as unexplored a country as it seems to be.

For the first time, a new crop of in-game-photographers are travelling  these gaming spaces to hunt for pictures. And just like their real-world counterparts, these photographers bring their own tastes and their own unique viewpoint to their art: Some of these pictures remind us of Ansel Adams’ majestic portraits of nature, others turn architecture into abstract collages, reminiscent of the works of Ernst Haas and Andreas Gursky. A few even pay homage to Robert Capa’s iconic war photography with their screenshots.  The best-known and most widely publicized of these pioneers is Duncan Harris of deadendthrills. The English games journalist compares his ultra-stylish, high-gloss pictures of games tweaked to look their very best to still photography in movie production, and like movie stills, his work is increasingly professionally used by game companies to promote their products. Last year, Harris was even given an advance build of Dishonored, Arkane’s steampunk-thriller, to fuel anticipation and provide an advance glimpse into the game’s stunning visual world. 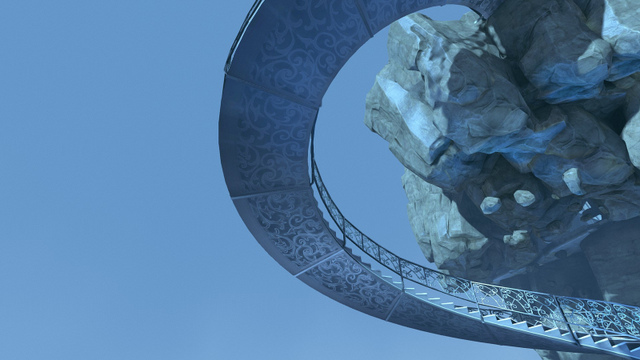 Others are following Harris’ lead. James Pollock, graphic design student in Bath, England, collects his in-game-photography on his blog Virtual Geographic. He says he was originally inspired by Harris, but ultimately opted for a completely different approach: Instead of emulating Harris’s high-end, tweaked-up high-gloss technique, he took a comparably low-tech route and started to take pictures of his TV-set with his iPod. He then  used Instagram and Hipstamatic for added effect – a clever workaround to most consoles’ restricted – or non-existent – screenshot-capabilities.
Pollock‘s black and white pictures of Skyrim’s majestic nature and Red Dead Redemption’s deserts evoke memories of Anselm Adams and the classics of nature photography, while his Polaroid-framed images of the blocky worlds of Minecraft and Jet Set Radio Future create a different scene entirely. They show that photo-realistic graphics are not prerequisites for impressive pictures.
While related projects by Robert Overweg, Kent Sheely and John Paul Bichard are grounded in the context of experimental media art, Pollock sees no difference from “real life photography.” “Treating virtual realities as real in this way is one of the things that makes it an interesting experience for me,” he says.
It’s the variety of approaches to their photographic hunting grounds that hints at the potential artistic richness of this niche – a niche which, as LA-artist and writer Eron Rauch argued in an essay on in-game-photography, finds itself faced with the same prejudice and scepticism as real photography in its infancy.

How can a “mere depiction”, a “mechanical reproduction” of nature or architecture – real or virtual – claim to be art? Traditional photography’s long struggle with recognition as an art in and of itself took 140 years, and, as Rauch points out, the distinction between banal depiction, professional use, aesthetic “amateur” photography and artistic experiments is also useful in regard to virtual photography. 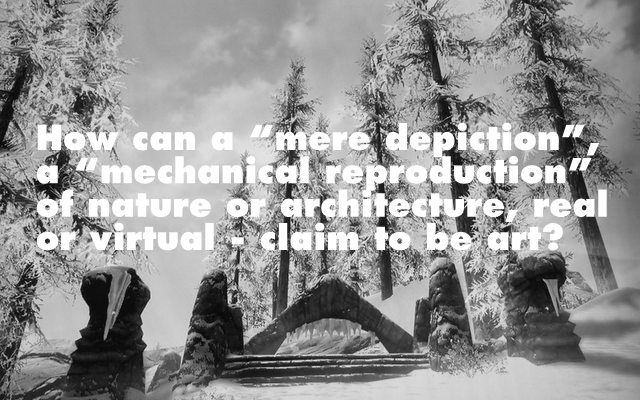 Far removed from the banality of mere screenshots, accomplished in-game-photographers, after all, need all the skills of real photographers – an eye for composition, angles and timing, and, above all, a personal approach to the game spaces they prowl for picture opportunities.
Like urban spaces and architecture, game environments, especially those in open-world-games with freely explorable, three-dimensional playing grounds, are wholly man-made and constructed. It’s not surprising that architecture, especially an architecture unbound by reality’s constraints, is a favourite theme of in-game-photographers.

The pictures of Australian gamer Iain Andrews, collected on Steam Postcards, concentrate on the details of these environments, the back alleys, corners and decor of these virtual spaces made for navigating through them. Like Joshua Taylor’s pictures, collected on his blog NOTRL, Andrews’ work documents the lovingly crafted worlds and details  that are destined to be overlooked by most gamers.
Contrary to Harris and Pollock, Andrews as well as Taylor retouch their pictures only sparingly and mostly settle for unmodified screen captures, without tweaking or modding the basic games (another advantage of PC-gaming in comparison to consoles). Still others painstakingly tweak their games to spectacular effect: The Dutch in-game-photographer Midhras uses mods like ENB to experiment with the parameters of his images. 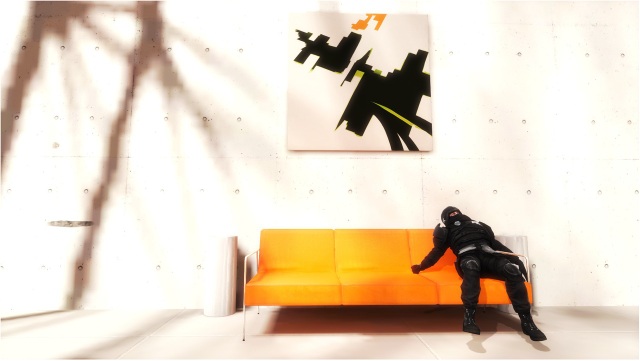 Photographing the unreal, sprawling architectures of gaming’s SF and Fantasy worlds is a challenge, but there’s also another opportunity to juxtapose reality and games: São Paulo-based photographer and graphic designer Leonardo Sang’s “virtual reality photography”-project uses games as a platform for what he calls “everyday photography”, and his pictures of Max Payne 3’s Sao Paulo have their place beside his real world photography of his city.
A legitimate movement has started. The pictures Joanne Harper, aka Pixiegirl4, takes of Assassin’s Creed: Revelations show a fascination with geometry and abstract shapes, while Karam Dawood’s sweeping vistas concentrate on landscapes and atmospheres. Kodama_SS, one of the few Japanese contributors to Duncan Harris’s Flickr-pool, uses post-processing and rendering-tools to present a surprising look at some of Japanese gaming’s greatest icons.
Right now, Harris‘s Flickr-community is the main rallying point for this particular sub-culture which is still fragmented and just below the public’s radar – although that may change: The Swedish Östergötlands Museum recently hosted an exhibition that showcased some of the most prolific in-game-photographers‘ works in a gallery setting.
With growing recognition, an inherent dilemma of in-game-photography becomes relevant: What about the copyright? Duncan Harris’s stance on these issues is clear: “I don’t and never have claimed any form of copyright over screenshots – it belongs squarely to publishers and developers.”
James Grimmelmann, an associate professor at New York Law School and copyright expert, agrees. ”The art assets in games are original works of authorship, typically owned by the companies.  So in-game photographs do implicate copyright. But if a company did want to make an issue out of in-game pictures, the user could raise a fair use defense in the United States.  Fair use is an open-ended context-specific defense that has to be evaluated on a case-by-case basis.”

Until now, the developers have taken kindly to the underground of in-game-photography. Martin Lorber, Head of PR Electronic Arts Germany, confirmed his company’s current laissez-faire attitude towards his customers‘ artistic experiments with EA’s games – as long as these experiments are not commercial. Although in the end, Lorber muses, the question of ownership of these works could well be decided by the level of creativity and a certain threshold of originality of the in-game-photographers‘ work – a dilemma that, in the future, might someday have to be decided by the courts.

Grimmelmann confirms that the in-game photographers‘ creativity in taking their pictures is the key argument here: ”It helps the user a lot if the use is transformative: when the user adds creativity of her own to the picture.”

The art of in-game-photography is still in its infancy, but it seems obvious that, with constantly increasing photo-realism and the popularity of open-world-games, more and more photographers will also look for inspiration and picture opportunities in virtual worlds. Kent Sheely, media artist and pioneer of experimental in-game-photography, sees in-game-photography as a perfectly valid form of photography.

For him, games are something more than entertainment: “Games are perfect art-making tools, because like art, they already abstract the real world and can provide new perspectives on it. They’re also a window into both current and nostalgic pop culture, since they have grown up alongside our current generation. It’s an ever-evolving medium. ” A shorter version of this article first appeared on the author’s blog, http://videogametourism.at/