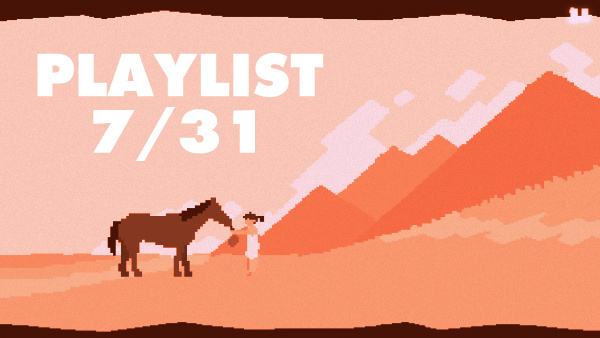 HAPPY BIRTHDAY PLAYLIST! You are one year old, and what a wild ride it’s been. As a treat, take 30% off all orders at the Kill Screen Shop until August 7th. Use the code PLAYLISTBDAY at checkout.

A Ride Into the Mountains (iOS, Android)

The name portends your play. A Ride into the Mountains, you think. That sounds nice. And it is. Kuo-Chen’s plaintive chimes subdue as the far-off scenery waxes and wanes with your horse’s every gallop. But then the wind kicks up and your mounted archer is beset with pixelated ravens, and you remember that mountain-living is not for the meek.

Buddhist hell may be on the wrong end of the stick from enlightenment, but it makes a damn fine backdrop for a strategy game. Set in the boneyard beyond your nearest Shinto shrine,Skulls of the Shogun is bedeviled by adorable undead feudal lords doing what they do best: decapitating fools. As they say, use it or lose it!

Who says space is the colorless cheerless uninhabited flatulence of malleable chaos? Played by placing your fingers on both sides of the touchscreen and balancing an astro-boy in tow on a rope, Sky Tourist is a bright and charming dexterity test in a distant galaxy. It’s great for alleviating those momentary flare-ups of existential dread too.

Time to play: a couple hours.