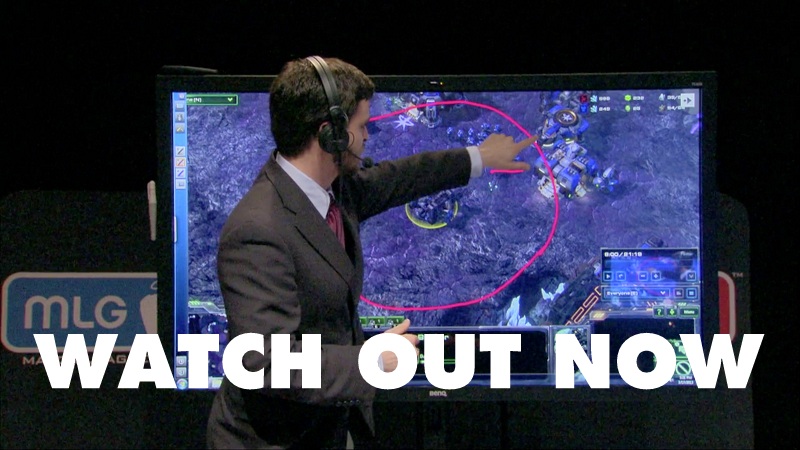 I’m watching a qualifying round in the Spring Championship for Call of Duty: Black Ops 2. It’s team Pulse against team Dread, and there are two men left standing. Magic is on defense, guarding a Pelican case that has a time-bomb in it. Nesbo is coming to kill him and defuse it. This much I am sure of. But when the camera shifts in perspective twice over the span of ten seconds, from the hunter to the hunted and back again, I get lost.

Then, someone gets shot, and I’m left wondering what just happened. I’d compare it to watching a shootout while flipping between the views of two security cameras.

For a spectator sport, why is it so hard to, well, spectate? These games are designed for the active player, not the casual observer who may want to kick back and have a beer. At the risk of sounding liberal, all guns look alike. And because the action is gleaned from the long end of a barrel, it’s incredibly difficult to keep track of even very basic information, such as who shot who.

The Nesbo-Magic face-off is as basic as they come in shooters, comparable to a one-on-one slam dunk, or a receiver and a cornerback fighting for the ball in the corner of the end zone. But when Julio Jones comes down with two feet in bounds, everyone, even my mom, knows he scored. Sure, it’s obvious, but the NFL has five decades worth of broadcasting innovation spent making it obvious. Twenty years ago, the founders of Major League Gaming, the organization that hosts the biggest Call of Duty tournaments, were playing NHL Hockey ’92 and filling out brackets on graph paper.

When Julio Jones comes down with two feet in bounds, everyone, even my mom, knows he scored.

Thanks to the commentators, we find out it was Nesbo that shot Magic to seal the victory for Pulse, but otherwise I might’ve never known who pulled the trigger. Black Ops 2 multiplayer moves blisteringly fast, and the tournament games are four-on-four, which means you are watching the fight unfold from the first-person perspective of eight different gunslingers. You can imagine that filming a Bronco’s game from a camera mounted to Von Miller’s helmet, while awesome for sacks, would not be ideal. And the same goes for shooters. Multiply helmet-cam times eight and things get overwhelming mighty quickly. I feel like I need to guzzle a four-pack of Red Bull to keep up.

Competitive shooters were never intended to draw a crowd. It just happened that way. While competitions are regularly aired even played across the internet, the early days of Major League Gaming involved clowders of Halo players lugging hefty televisions to a small basement in the East Village. But as the audience has grown. (More than two and a half million viewers tuned in to watch MLG’s last major tournament held in Dallas in March.) And publishers have taken notice. For the first time last year Activision included a feature for camera control in the Call of Duty series, which allows a video jockey to shuffle between the players’ screen, stats, and the map. Baby steps.

Chris Puckett, the guy who does the shuffling via an Xbox controller, might be the most inspiring multitasker I’ve ever met. He has the exhausting task of staying on top of every firefight at once. “That’s something I just learned through my eight years of experience with shooters,” he tells me, sounding less animate than he does while commentating, when his voice can approach auctioneer speeds. He describes his job as “looking at the map, analyzing the positions, and going to the player who’s likely to make a run.”

Codcasting, as Puckett called it, is far from an exact science. “Unless you know where the players are trying to push to, it’s going to be hard to watch,” he says, admitting that upwards of ninety-five percent of regular viewership are other shooter players. While it’s true that there is a vastitude of card carrying, Call of Duty loyalists in the world, demographically this presents a challenge. “I’ve struggled to find the balance of how hardcore to go,” he says, often resolving the more hardcore, the better. This is true especially during the qualifiers, when he “takes the liberty to switch between players at a very fast pace.”

“I’ve struggled to find the balance of how hardcore to go.”

Personally, I’m hopeful the future holds a way to make competitive shooters accessible to everyone, because you don’t have to be an aspiring first-round pick to enjoy watching sports. I’d wager the majority of NFL fans have done little more than toss a pigskin around the backyard as a child. For now, that bright future seems hinged on developers including more camera options, which would free the curious observer from the AWOL characters’ limited point-of-view.

Having a camera at the right place at the right time is an art that pro football producers have down pat. There are skyward cameras on the 20- and 50-yard lines, cameras that swoop over the field on cables, and cameras on the shoulders of cameramen–basically a camera for any situation. Puckett can picture a similar entourage in place for e-sports, enabling the audience to look at shooter arenas the way they they look at the gridiron. “You’re going to need six to fifteen static cams positioned around the level to see everything at any given point,” he says. Then, the director would simply cut to the best shot.

“You’re going to need six to fifteen static cams positioned around the level to see everything at any given point.”

How else might shooters become friendly to spectators? When I brought up the issue with Joe Miller, VP of Engineering at Sportvision, best-known as the company that invented the yellow first-down line, he had an elegant solution: augmented reality. Something similar to their augmented markers could be extremely helpful when watching competitive shooters, because, the way it stands, it’s impossible to know at a glance what team a character is on. This is of course by design, as going undetected gives players an advantage, i.e., you don’t want to stick out like a sore thumb when dudes are running around with guns. However, if drab army gear were brightened with colors that only us spectators could see, problem solved.

There is an argument against making competitive shooters more accessible like other sports. It’s not incredibly convincing, but for what it’s worth, the reason many Call of Duty players watch is to see the game in first-person. “They want to see what it is these pros do differently,” Puckett says, “what’s separating the pros from the casuals.” Perhaps a small price to pay for bring these games to the masses.