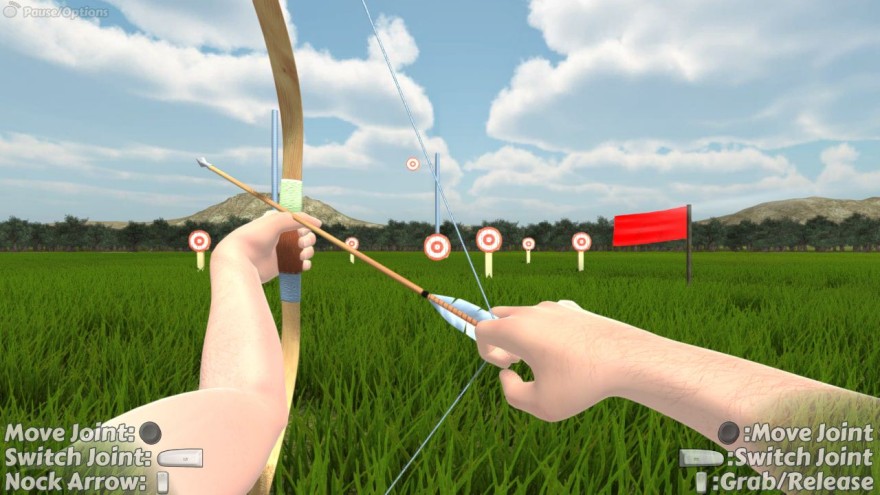 …And the shot goes wide.

That’s the gist of Probably Archery, right there. You’ve got six joints to manipulate, divided between two arms, and you’ve got to move them all, one at a time, to bring them into harmonious arrangement to shoot an arrow. When it works, and you succeed (you will rarely succeed), you may on occasion be rewarded with the fleeting joy of landing a shot. Maybe.

Probably Archery seems to be another entry into the burgeoning genre of failure comedy, which, while perhaps not unique to games, is certainly expressed in some unique ways by the medium. Octodad: Dadliest Catch is a game rooted in the fundamental ineptitude of its protagonist (and, by extension, the player), and it succeeds in generating plenty of laughs and some dramatic tension by suggesting that if you fail badly enough, Octodad’s true identity will be revealed and his life will come crashing down around him. Surgeon Simulator, in a similar vein, creates comedy by giving the player an extremely unwieldy instrument for a series of extremely sensitive tasks.

Incompetence, in the right scenario, can be downright hilarious.

In terms of mining failure for comedy, however, Probably Archery lies closer to an earlier, much simpler title: QWOP. QWOP sees players attempting to run a 100m sprint by controlling a runner’s thighs and calves separately, and the results are predictably hilarious–it’s nearly impossible to make any forward progress at all, and if one is lucky enough to get a little forward momentum, it’s exceptionally difficult to keep it going.

But comedy is a funny thing—so dependent on context—and Probably Archery varies wildly between scenarios that can easily raise a laugh and scenarios that simply left me looking at my screen with wonder, completely bewildered at the notion that someone thought success was possible.

The simplest challenge one can attempt in Probably Archery is target practice. Attempting to hit one of the several targets lined up before you is exceedingly difficult, as even once you can successfully nock an arrow to your bowstring, there’s no targeting reticle, which means that you must attempt to guess the arrow’s trajectory based on the angle in which it sits in the bow.

There is a certain kind of simple satisfaction in gaining proficiency at bringing the two arms together, in understanding when to transition your control from one arm to the other or from elbow to shoulder in order to bring the arrow to a position in which it may be nocked. But even once you can accomplish that, getting the arrow to travel in a satisfactory arc is an entirely different endeavor.

You probably can guess, with a fair degree of accuracy, how much success I had with these modes.

The above modes don’t grant you much in the way of gratification if you fail.

The unfortunate thing about Probably Archery is that the above modes don’t grant you much in the way of gratification if you fail. Having an Olympic sprinter fall flat on his face with an ignominious grunt is pretty funny. Playing as a brain surgeon who is barely able to grip a mug of coffee is very funny. Playing as an octopus in a suit and flailing through a suburban grocery store while other shoppers look on, apparently none the wiser, is exceptionally funny.

Repeatedly missing with your arrows just isn’t that funny.

There are a handful of exceptions. My favorite mode in the entire experience, by far, is the one called “The Berserker.” In this mode, one of the many apple-headed homunculi which populate the game is placed far, far in the distance, and it proceeds to charge directly at you, wielding a broadsword and shouting continuously.

Attempting to bring your two arms together to ready a shot as your aggressor charges blindly toward you is beautifully simple and absurd. In any other shooting game, such an opponent would pose no threat whatsoever, but the balance between the ludicrous distance the sword-wielding apple-man has to travel in order to reach you and the exceptional difficulty of lining up a shot combine to create a fine piece of participatory humor.

Probably Archery has a number of different technological tricks up its sleeve—it’s Oculus Rift compatible, for example. Perhaps your failure was more _immersive_ than mine was. It’s also compatible with the Razer Hydra, so your failure could be more motion-controlled, too. Would all of these new technologies make the failure of Probably Archery demonstrably funnier, or less frustrating?