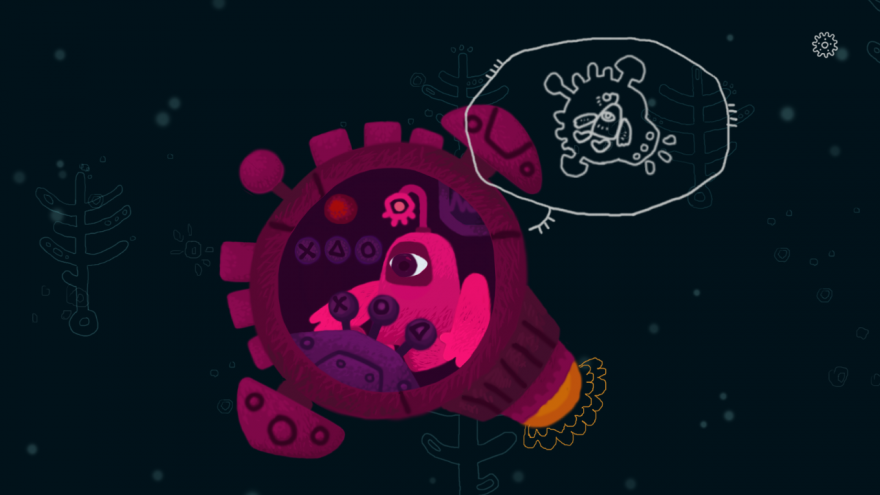 One Eyed Kutkh is to be a videogame that imagines how the fairy tales of eastern Siberia would turn out if they were about space travel. It follows the titular traveler from outer space—a one-eyed alien, basically—as they try to make their way home, but end up lost on Earth. According to the game’s description, to return to his journey, the traveler needs “to get to ninth heaven, deceive the Sun and the Moon and steal their space-boats.” This is something he’ll manage to do with the help of the indigenous people of the area.

The story is a delicate weaving of traditional folk tales and original fiction based on our current knowledge of the universe by the Saint Petersburg-based studio Baba Yaga Games. They chose to work with the old tales that originate from eastern Siberia due to the studio’s artist and co-founder, Lyuba Nurmukhambetova, having spent her childhood in Yakutia and therefore having an understanding of the culture. “She has a lot of books with fairy tales, myths, about shamanism, about folklore and rituals, which we used in our work,” the studio’s other co-founder, Asya Yurina, told me.

While coming up with the world for their game, what the studio decided was that it would be based on the World Tree from the indigenous people’s culture, but it “would be possible to travel between the upper, middle and lower worlds by the rocket. And people could move from one planet to another.” And so while the game may serve as an introduction to the fairy tales it is based on, the changes that have been afforded mean that Baba Yaga don’t intend for it to be representative of that culture, or to educate about it in any way. “We just hope that our players will try to look at the world through the eyes of the men of this culture, learn to see the poetry and warmth that seems cold and distant to most of us,” Yurina said.

This is something that Baba Yaga thinks videogames can achieve better than many other mediums. The two co-founders have a background in puppetry and theater, and actually, One Eyed Kutkh was planned to be a puppet show, but then they saw the potential of turning into an adventure game. According to Yurina, the videogame format gives them more freedom and possibilities when implementing their ideas—for starters, they don’t need to think about where they’re going to hide a puppet’s strings and the person operating them.

“Theater stage is very limited space, and it’s a challenge for the artist, but now we would like to simply do everything that [comes] to mind, without thinking about the size of the stage and the presence of the required lighting equipment,” Yurina said. “Also, the format of the videogame allows us to communicate directly with our audience, making it a part of the story. We believe that the main advantage of videogames as an art form over all others is a direct dialogue with the player.”

One Eyed Kutkh isn’t Baba Yaga’s first videogame. That title belongs to the children’s educational app It’s Spring Again, which was released last year, and uses the same bold, sketchy-line art style. One Eyed Kutkh is still in development and should be coming to Windows, Mac, Linux, iOS, and Android soon. An online demo is available on its website.

You can find out more about One Eyed Kutkh and play its online demo on its website. You can also vote for it on Steam Greenlight.