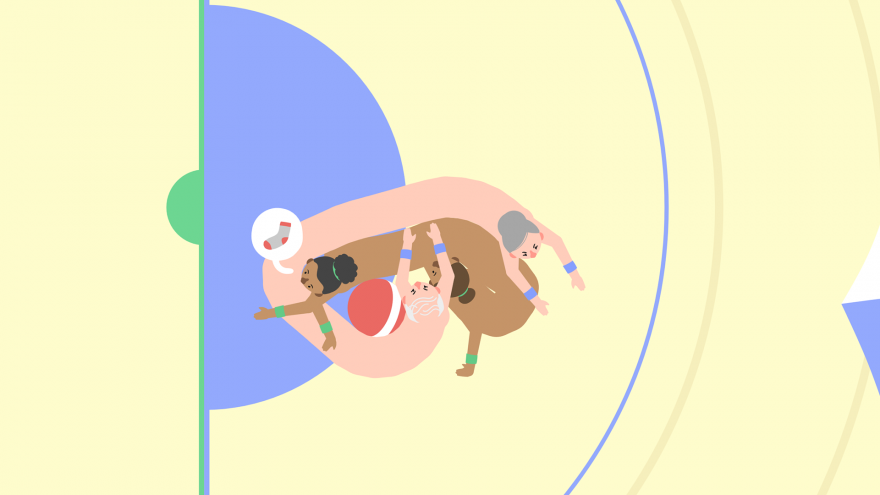 Delightfully repulsive couch co-op game Push Me Pull You is headed to PlayStation 4 and PC, Mac, and Linux early next year.

The game pits two teams of two players each in a literal head-to-head duel, where team members control their own side of a stretchy, noodle-like body conjoined at the midsection. Both players in a team have the power to extend and contract their side of the body at will, helping to coil, twist, and worm their way around an arena (and their opponent) for control of a ball.


It’s gross, hilarious, and unlike any other local multiplayer game I’ve played. The controls are fluid and the team dynamic is immediately apparent, but there’s a level of silliness that emerges from the awkward competition even outside the comical visuals and fleshy sound effects. It’s the shared disgust, confusion, and amusement between teammates and opponents, the improvised strategies that somehow form among the squirming mass of meat, the strange vocabulary that’s crafted mid-game for common patterns and formations. I still remember a few from my first encounter with this game during GDC 2014: The Slip. The Worm. The Snail.

“playing soccer with your small intestines”

The way Melbourne-based developer House House describes it is just as gag-inducing: “Push Me Pull You is a videogame about friendship and wrestling. Joined at the waist, you and your partner share a single worm-like body and must wrestle the other sports-monster for control of the ball. It’s a bit like a big hug, or playing soccer with your small intestines.”

Along with the PlayStation 4 announcement comes new info on additional game modes and arenas. One new mode, Knockout, adds two balls instead of just one, so players must work to keep their own ball in the arena while pushing their opponent’s out.

Push Me Pull You will be available to demo at PlayStation Experience in San Francisco on December 5 and 6.

Learn more about Push Me Pull You on its website.