It’s less than an hour into Dishonored when the game begins to show its true complexity. Having already betrayed, imprisoned, tortured, and freed the player, the game squares away most of the plot and leaves you to the first of a string of assassinations that form the backbone of the game: Dispose of a tyrannical religious elder, and, encouraged by the plea of his niece, save the captain meeting with him. A little eavesdropping later, and you quickly uncover that your target, High Overseer Campbell, plans to poison Captain Curnow, the man you would protect. The stage is set for an almost classical betrayal, a piece of machiavellian theater of the highest order.

Your role in this play is clear: pick your way through the corridors of the Overseer’s office, slink into the wood paneled room with its high bookcases and rich carpet, and switch the glasses, poisoning one man and saving another. But if you do this, if you teeter on top of chandeliers while guards patrol below, swoop from shadow to shadow to shadow, and deaden your footsteps on those crimson carpets, you’ll find yourself within an equally theatrical dilemma. When you finally reach the crystal glasses of Tyvian red, set on a silver tray, the game stops you dead. Four options flower out from the wine. Switch the poison. Spill the wine. Walk away. Or, and here’s the sticking place, poison both.

It’s difficult for first-time players not to hover over that final choice, and, even multiple playthroughs later, I still find myself drawn to this moment. It seems at first to be the fool’s option, the ubiquitous red herring in the multiple choice quiz. Yet it’s a viable option and, in fact, it’s a surprisingly efficient one. Switch the poison and you must defend Curnow from attack by the guards who assume he’s killed their master. Spill the glasses and you must wait until another opportunity to kill Campbell presents itself. Walk away and leave Curnow to his fate and Campbell will trigger a lockdown so he has time to dispose of the body. Poison both and the scene plays out with glorious dramatic irony. You watch as Campbell casually offers the wine, relishing the moment. He waits until he is sure Curnow has had enough poison to deliver the spiteful insult he has been desperate to say. Then moments after Curnow’s death, he feels the poison catch in his throat and collapses, a bemused look across his face. Two dead men in a room. Neat and tidy. No guards, no alarms. One mission failed and another accomplished. It has a kind of timeless poetry to it, as if it was an old story, being retold for the thousandth time.

The story can, of course, turn more ways than this. It can be as simple as a blade driven into Campbell’s neck, twisted to break the collarbone and spine. Or it can be as long and winding as the passages that lead to Cambell’s hidden chamber, where his attempt to put a knife in Curnow’s back can be foiled by simply triggering a record player—the sound causing Curnow to turn and discover his attacker before he strikes. It’s not a simple case of choosing one way or the other, but something else, something that speaks of the ebb and flow of drama and tension. The games fate plays with the lives of men. Even a reprieve can be ordered, Campbell branded and exiled, collarbone and spine still intact. This is the subject of Dishonored: the theater of fate. Each of these choices come with unique scenes, conversations and encounters that make sense of the willful hand of the player even as she changes her course on a whim.  Events are made to rhyme, and echo back, some way down the path. It is this that makes Dishonored’s tone, perhaps uniquely for such an open game, distinctly literary.

The games fate plays with the lives of men

It seems odd, even now, that Dishonored comes from the same publisher as that titan of the open world, Skyrim. As Dishonored: The Definitive Edition, appears on Xbox One and PS4, Bethesda even seem a little embarrassed by it, resistant to give it any press at all. Perhaps that’s because the game is little more than a straight translation, bringing the console experience up to the PC standard of its original 2012 release. Yet there’s something welcome in the lack of tweaking and adjusting, the tiresome discussions of frame-rate improvements and additional content. The purity seems appropriate for a game which, as a rare case, feels like an altogether elegant object. That’s why it contrasts so strongly with Skyrim, a game so vast and towering that it seems almost never-ending. A game for which, if there ever was a next generation port, would receive the care and attention of an aging trophy, buffed and polished till it shines. Dishonored, meanwhile, reappears without any additional bells and whistles, its feature set as closely curated as it was three years ago.

Dishonored is not an open-world game, a statement that seems all the stronger now those three years have passed. Its missions, nine in total, all take place in closed-off levels. These levels are all set in the same city, sometimes in the same parts of the same city. There is no day and night cycle, no dynamic weather. It rains and the sun shines, and if it is night it stays night until you go home. It would not be right to say that each one of these dioramas, each street and rooftop of the city of Dunwall, is part of a living world. No, they are each an ornately machined toy, a clockwork set of rules and systems ready to be exploited. It isn’t freedom, or even free choice that drives the player. It’s a narrative, one malleable enough to become any story about a person trying to kill another person. Two dead men in a room. A whole mansion of bodies. A glittering party from which the host disappears to far-off lands that remain unseen. Each path and choice loops back upon itself, until the whole thing is wound in storied knots, like woven rope or some arcane symbol of an unknown purpose. Skyrim’s symbol is the ever-expanding circle. Dishonored’s is the celtic knot. Skyrim’s routines are vectors of onward movement. Dishonored’s routines are the machinations of an unsound machine. Skyrim’s logic has become that of every open-world game. Dishonored’s logic remains potently unsolved.

But these are not just machines we are discussing, these are fictions too, and Dishonored’s grand city follows the same logic as its construction. Everything in the game has a narrative all its own, but none of these threads leads outside the themes and atmosphere of Dunwall. Even health and magic potions are found with smugglers notes, explaining their presence, while the potions themselves are competing placebos for the plague that is slowly eating the city. There’s a reason, then, for them to be found in the desperate hands of dead men in dirty streets, or in the pockets of cautious guards. It’s a fiction that always serves a purpose. Books found in the condemned tenements of the city don’t flood the world with a history of oddly named king’s and heroes, instead choosing to colour the systems and hierarchies of Dunwall with direct testimony. An account of the whale hunts that grant Dunwall the technology the player uses. The rites of whelping that result in the hounds that track your every move. There’s a texture to it all, as if the entire game had been soaked in the same filthy river. One book simply contains the names of the thirteen months. The Month of Earth. The Month of Seeds. The Month of Nets. The Month of Rain. The Month of Winds. The Month of Darkness. The Month of High Cold. The Month of Ice. The Month of Hearths. The Month of Harvest. The Month of Timber. The Month of Clans. The Month of Songs. Perhaps the simplest story that can be told.

Yet Dishonored’s simplest story is also the one most easily mistaken as its “plot.” As if a silent man in a mask could be thought to speak louder than a whole city split between the rich and the dying. Corvo Attano is everyone’s puppet—both the player’s plaything and the Outsider’s toy. It’s difficult to feel empathy for a man whose silence keeps him from accusing those that betray him, an irony that is perhaps not lost on the game’s creators. In reality, Corvo is little more than a frame on which to hang the justification of any act. From a brothel massacre to the merciful path which sees not a single death at his hand, as a man of honor and vengeance he is able to swing both ways. He is a contradiction by nature, not by mistake. He is the man who carries a sword yet never bloodies its blade. Or not. This is, after all, the game that changes as you play.

the game that changes as you play

That’s the crux of it, the meaty space between function and fiction that Dishonored works its way into and begins to grow. It’s a tumorous growth, an ever-inward process of systems that feed each other and people that eat each other, all cast in a light that struggles through gray cloud to fall on fetid bricks. It is a beautiful supernatural game about the ugliness of humanity, and a set of rules that jostle like eggs in basket, each one threatening to break the other. But most importantly, unlike those dead-eyed routines of the citizens of Skyrim whose paths have long grown familiar to us, it’s a game that still feels potently (for want of a better word) alive. If there is one element of Dishonored that might capture such a state, it’s the game’s “heart.” A perverse construction of organ and clockwork that is both a cruel pun (“Corvo, who was always close to my heart”) and a source of untold mystery. When held out, it shows secrets and whispers tales, as if it was the narrator of every story Dunwall has to offer. A fleshy machine turned to an arcane purpose, it is both storyteller and pathfinder—two roles that in Dishonored are one and the same. 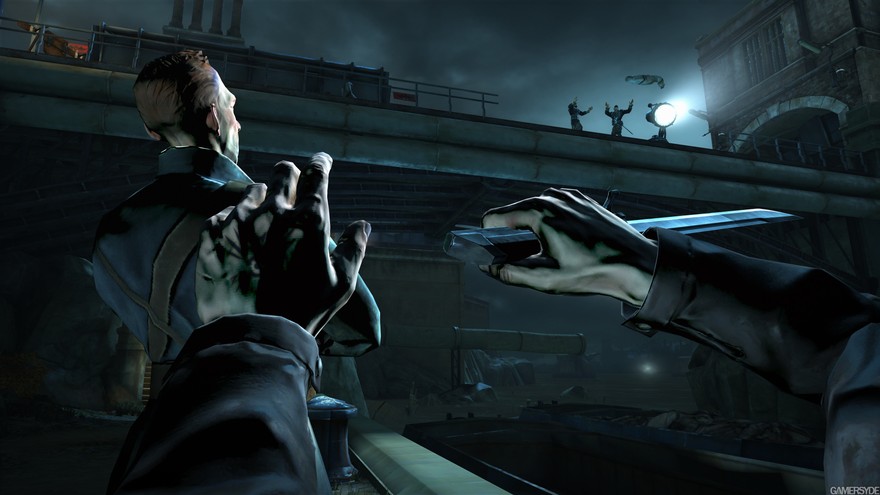