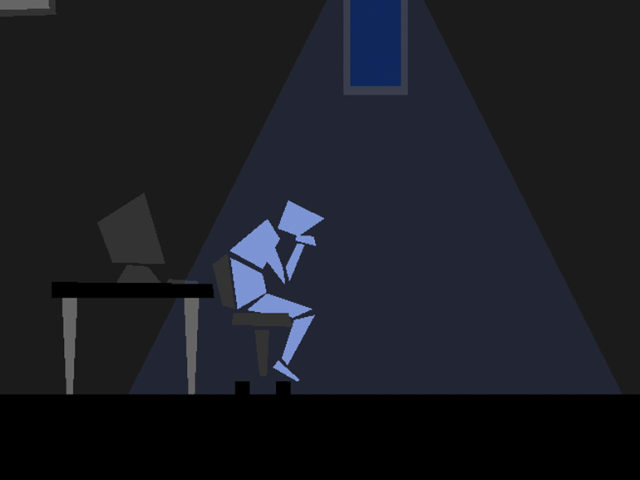 It’s 2:24PM and I’m playing 3:15AM, an experimental game made by Martin Fasterholdt and Tim Garbos at the Nordic Game Jam held two weeks ago in Copenhagen. I have no idea what to do.

My lo-poly man sits in an office chair. His posture reminds me of the Thinking Man statue; my own thoughts are similarly statuesque, i.e., frozen solid, inert. The only instructions say “Arrow keys to move.” I press right and I fall off the chair. I start over, then press left. I fall again. A persistent drone hums. Moonlight filters through two windows. A desk, cabinet and lamp shade are the only other objects in the room.

What do I do? Where can I go? Why can’t I stop trying to solve this clueless riddle?

3:15AM takes that feeling, of uncertainty mixed with elation felt only between dusk and dawn, and converts it into a strange, captivating little pill of a game.

The Nordic Game Jam, held this year from January 17th to January 20th, is one of the biggest in the world, and notable indie developers from Nifflas (Kyntt Stories) to Vlambeer (Super Crate Box) gave talks, discussing their approach and past successes or failures. But the main program is the Jam–forty-eight hours to invent, plan, design and program a game from scratch. Garbos, one of the Jam’s main organizers, said the feeling of unease in 3:15AM was a key element from the game’s inception.

“The initial idea was a game where the player would be in doubt about what exactly he was controlling and why,” he wrote in an email. “We started out with a rolling box, but quickly started looking around at other arbitrary objects around us and saw a chair. The ideas were centered around confusing and deceiving the player.”

‘Is it the funeral of the man in the beginning? Did the chair kill him to escape the mundane office life?’

Objective achieved. After numerous false starts and missteps, I finally realized the obvious: the person is dead weight, something to leave behind. You must help the chair find its way. Doing so involves clever use of minimal actions and taking advantage of your environment.

Though 3:15AM is more an artful sketch than a fully-produced game, it offers simple lessons for engaging a player. Satisfying sensory feedback is key (Jukio and Joonas supplied the sounds); an abstract goal, if provided in a confined enough area, can encourage exploration and discovery. Don’t look too deep into this late-night discursion, though.

“It was made almost as a joke on overly pretentious art games, and any meaning found is coincidental. But of course people made interpretations and asked questions anyway. ‘Is it the funeral of the man in the beginning? Did the chair kill him to escape the mundane office life? Did the chair die from going down the hill?'”

If you’re asking, “Wait, what hill?” I shan’t discuss my progress further. Instead I encourage you to solve this riddle yourself.