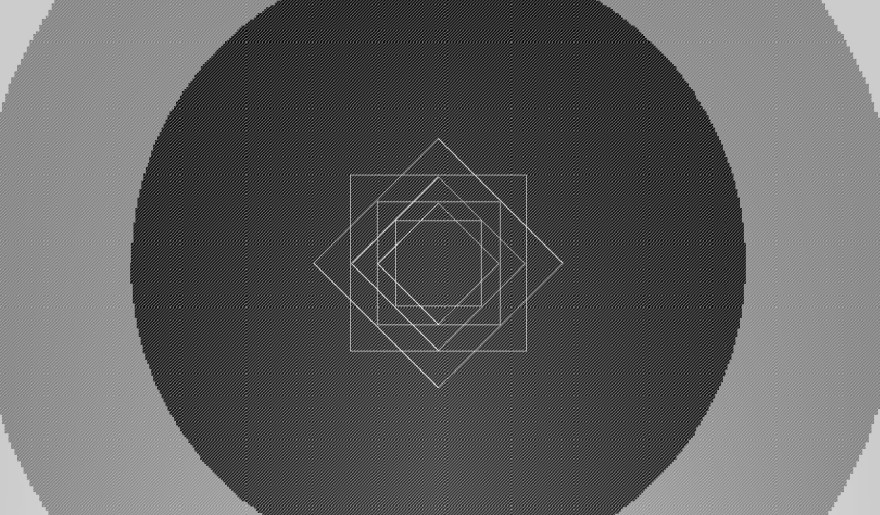 “You told no one, right?” This is the language we use when speaking of secrets. Something was found out and it must be kept as unknown as possible. It’s telling that Karachi-based artist NAWKSH uses these words to title his videogame Told No One. For it seems to be a tightly woven secret itself. It’s hiding something, perhaps many things, beyond the arcane rituals it tests you with.

From the outside, Told No One seems simple enough. The description reads: “five short sound puzzles / interactive experiments in greyscale.” Sounds quite pleasant. But once you head inside it’s immediately clear that something else is going on. Something potentially sinister. It assaults you with a screen of harsh noise. Your immediate reaction will probably be to click on it and hope it goes away, and it will. But if you endure it for a few seconds a face appears, traced lightly in the static, staring you out from the other side of this hostile surface as if this were a video call (with terrible signal) made to threaten you. Who is that?

sounding like a computer error stuck in the throes of death

You’ll ask a lot of questions as you play through Told No One. Even when you get an answer you may not recognize it. The puzzles are like that: wordless, lo-fi, slow to fade out when solved. The first turns your computer mouse into a microphone. With it, you’re able to move over a large spinning occult symbol. If anything, this symbol resembles the satanic zodiac (this one), with the line art in the middle morphing into a pentagram, moons orbiting the largest circumference as they go through their cycle. Each of the geometric shapes are assigned a sound and you can spot them with your mouse. Something here will take you to the next puzzle if you listen close enough.

Told No One requires quite a lot of you. Not only patience but determination. It gives little clue as to what it wants you to do. In one puzzle you need to spin a circle that seems to rewind and fast-forward the background as if it were the plastic reel of a cassette tape. Not only does the speed change, but the chaos does too, with everything on the screen vibrating, turning into glitch-noise, it all sounding like a computer error stuck in the throes of death. It’s actually quite exhausting—the puzzle being akin to slowly dunking your head in a bucket of acid and then taking it out again.

The biggest mystery of Told No One is at its end, once you’re through the puzzles. You’ll get to select from a number of circles that take you to what seems to be a short video clip of the door frame of a house, or a street turned upside-down and viewed from the window of a moving car. There are more. It’s like you’re glimpsing into someone else’s life, as if this were the secret the game was hiding, and the puzzles beforehand were only there for you to prove yourself worthy of being let in on it.

At the start of the game, you were being looked upon by a distant viewer, now it seems you have swapped roles. What was unknown is now known. I suppose you must tell no one.

You can download Told No One on NAWKSH’s website and itch.io. NAWKSH also produces music and shares it on Soundcloud.