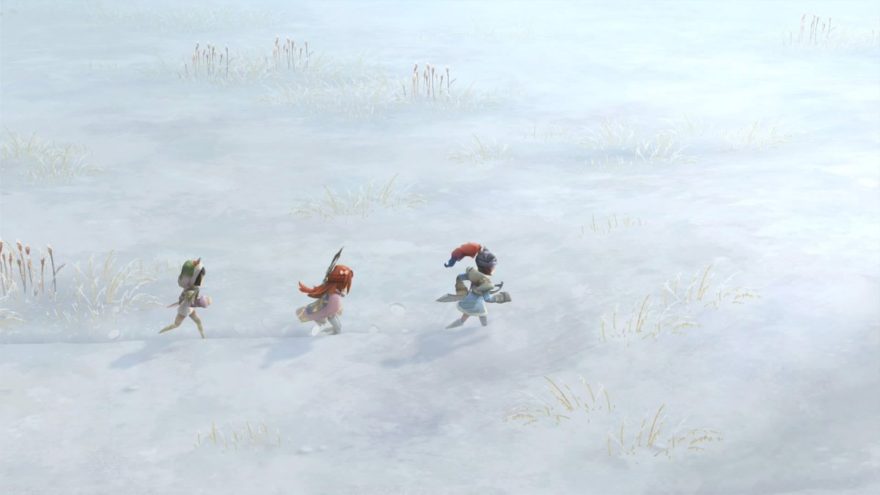 Title:
I Am Setsuna

I grew up with JRPGs, but not in the sense that most people grow up with them. My mom always played them, and I always sat perched, cross-legged in our quaint apartment, happily petting our cat and watching her exciting journeys unfold. Mostly, it was the Final Fantasy games, but sometimes we’d fit a Sonic the Hedgehog session in. My mom was only 21 when she had me. She was a single mother who simultaneously juggled raising me, going to college, and working part-time. Videogames became her only hobby—they were an escape from her stress-inducing reality.

JRPGs, especially those of the 1990s, offered grand magical worlds for my mom to hop into. They were emblematic of adventure, pulled along by a simple goal for my mom to follow. All their stories were basically the same, with obvious twists and turns coming in from a mile away. But the plot never really mattered as much as the endearing characters and the sense of spectacle that came with exploring their worlds. Tokyo RPG Factory’s I Am Setsuna takes inspiration from those beloved JRPGs of yesteryear, most unabashedly from Chrono Trigger (1995), but loses sight of its inspirations’ most important qualities.

Bearing no personality or liveliness of its own

I Am Setsuna begins in a familiar way. You play as masked mercenary Endir, an atypically voiceless protagonist, who is ordered to kill a girl bound by fate to be sacrificed for the Greater Good (or, stopping monsters from taking over the world, as usual). You make an attempt on her life, but the girl, the titular Setsuna, talks you out of it. From then on, you join her Sacrificial Guard and embark on a journey to the ominous Last Lands, meeting new companions along the way. The story’s fine. It’s simple and somber. But while I Am Setsuna gets the generic aspects of classic JRPGs right, it skips over nearly everything else that made JRPGs of its time so memorable, bearing no personality or liveliness of its own.

This is especially deplorable as I Am Setsuna is concerned most of all with trying to evoke JRPGs from the 16-bit era. These are games where dialogue and dynamics between characters brought the stories to life, and almost only that. Older JRPGs didn’t have the luxury of graphics that could effectively animate a character to life, or even necessarily a striking art style to complement each personality. Instead, these characters had to stand out through mere dialogue boxes and how they interacted with one another. But I Am Setsuna apparently didn’t get that pointed memo, sticking with bland, cookie-cutter characters through and through. When I think of the JRPGs I watched unfold in front of my mom and I, I see Terra narrowly surviving the final battle against Kefka in Final Fantasy VI (1994), Sephiroth’s betrayal in Final Fantasy VII (1997), and I remember thinking Squall was kinda annoying in Final Fantasy VIII (1999). Now, located as I am on the other side of I Am Setsuna, I’m straining to think of any single scene or character that left even a trace on my mind.

Yet, there are still brief glimmers of warmth in I Am Setsuna. Sometimes your quirky magical companion Kir will say something silly or brash, and everyone will knock their heads back in coordinated, silent laughter. And, for a moment, maybe I’d smile. At one point in the game, the gruff warrior Nidr has his secret past revealed, and it’s genuinely heartbreaking. Yet, his painful past is quickly glossed over in favor of the less interesting journey at hand, and is hardly brought up again. I Am Setsuna doesn’t give its supporting party members a chance to shine, as the great JRPGs of the past did, nor does it deliver on the illusion of choice that the player is seemingly given. I personally played Endir as a dick the entire game because I thought it was funny, which would often draw gasps from my companions. Sometimes Setsuna would sadly say something to the effect of, “That’s so unlike you,” which never made sense because I always chose the rude option in a dialogue branch. It just didn’t seem like her, or her companions, were ever listening to the mean Endir I had orchestrated from the start. It never felt like the dialogue—with or without choices given—had any weight.

One of the enduring appeals of JRPGs that I Am Setsuna also neglects is that of exploration. The varied lands of any 16-bit JRPG, like the overworld and underworld of Final Fantasy IV (1991) or the sci-fi musings of Phantasy Star IV (1995), feed into the game’s sense of adventure. Because really, what’s an adventure if you’re not going to new places? Yet, somehow, I Am Setsuna abandons this well-loved trait, with every town a remix of the same basic template, and a dreary piano soundtracking its entire 20-something-hour journey. There are only two towns that look wildly different from all the others before them—and one is only accessible near the end of the game, once you get a handy-dandy airship (this is a JRPG, afterall). At rare times, some of the dungeons manage to avoid the buried existence of the others, all of them found within snowy mountains or ice-governed caves. Unfortunately, the diversity in environments ends there. Setsuna and her guards’ journey ends up not feeling like an adventure, but a never-ending slog through chilly, familiar territory, skirting a world much bigger but never quite reaching it.

A game so dedicated to trying to make you feel sad

Winter is commonly an analogy for sadness. For instance, Kanye West notably used the cold as a motif for his 808s and Heartbreak (2008) track “Coldest Winter,” an ode to his late mother. Winter is often emblematic of a trying time in one’s life—one that’s incessantly cold and harsh, like your feelings when you’re blue. I Am Setsuna grabs the winter motif and runs with it: everywhere in the world is covered with snow. It’s breathtaking at first, and successfully sets the tone for the game until you realize that every new island and town you travel to embodies the boundless sleet. It’s a game so dedicated to trying to make you feel sad (since this is a game about leading a girl to her sacrificial death), that it drops you into a perpetually snowy world to match the dreary tale it weaves at nearly every turn. If this sounds one note that’s because it is. It may succeed in thematic focus—that’s for damn sure—but it forgets to rope in the magical qualities of its inspirations, to balance the bitter with the sweet.

The only area where I Am Setsuna succeeds wholeheartedly is how it plays. I never grew tired of its quick-paced combat, or its Spritnite-accumulating system. While I never really ventured outside of a very specific trio of heroes (Nidr, Endir, and Setsuna), the game still encouraged me to test out new parties to see who best complemented one another. Yet, once I found my favorite trio, I stuck with them for the rest of the game—there was never a need to deviate. Still, at its core, I Am Setsuna plays precisely like a classic JRPG of the Active Time Battle variety, and requires smart, spur-of-the-moment strategy as those games once did.

If I Am Setsuna were released in the 1990s, my mom might have played it. I’d sit idly beside her, wrapped in a flurry of blankets, next to my napping cat. It’s likely that we’d both somewhat enjoy it, but maybe would remark about how none of the characters stuck with us, or how the environments never amounted to anything you’d want to put on a postcard. I wish I Am Setsuna took me on another beautiful, multifaceted adventure like it wanted to, as the JRPGs that its creators admire once did. I wish the characters weren’t bland caricatures of familiar characters I’ve seen in the past. Instead, it feels like a cold attempt at harboring nostalgia, only managing to remind me of JRPGs of the golden age, and how so much better they were—and, critically, still are. At the very least, maybe I’ll finally give Chrono Trigger a try.